BART, Labor and a Grave Report 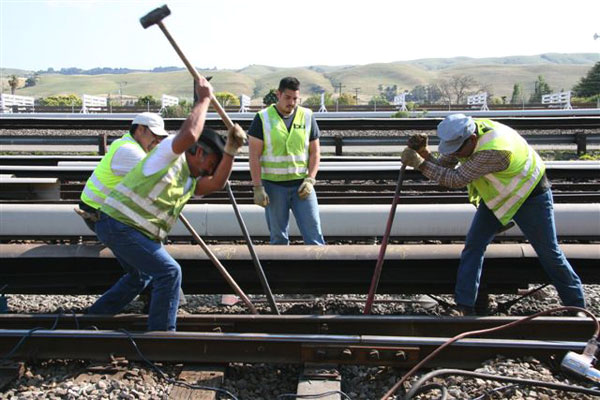 Next week workers of Amalgamated Transit Union Local 1555 will decide whether to ratify a contract from Bay Area Rapid Transit (BART).

ATU is one of five unions representing workers in the BART system and represents about 25 percent of the system's workers. BART, a regional commuter rail system, transports more than 300,000 passengers a day.

The tentative agreement reduces the number of workers paid by BART to conduct union business; increases the number of years new employees have to work before qualifying for medical retirement benefits (from five to 15); eliminates an earlier effort by management to take away three floating holidays; and aims to reduce the workforce through attrition rather than layoffs.

On Sunday, ATU and BART management reached the tentative agreement and averted a strike just six hours before workers would have shut down the system.

Two unions, Service Employees International Union Local 1021, which includes 1500 mechanics, custodians, clerical workers and safety inspectors, and American Federation of State, County and Municipal Employees 3993, which has 200 mid-level managers, have both already ratified four-year contracts with cost-saving measures but said they would have honored picket lines.

Jesse Hunt, president of ATU, said more details had to be hammered out to make the deal palatable for the 900 rank-and-file members and that there were "difficult decisions facing these negotiations and to get to an agreement equitable for our members and that maintains the highest level of safety and service for riding public."

BART spokesman Linton Johnson said earlier that the agreement "won't make anybody rich, we know that, these are tough times right now." BART says it is facing a projected $310-million deficit over the next four years and fewer riders. It had sought $100-million in labor savings, with ATU shouldering about a third of that.

ATU rank-and-file members called plans for the strike after BART's board of directors unilaterally imposed a one-year contract on the station agents and train operators by a vote of 9-0. ATU balked at the $38-million in labor savings from the union sought by the board.

The contract would have required ATU members to pay 7 percent of their salary toward their state Public Employee Retirement System. At the time, Hunt called it "a regressive proposal that will net a 7 percent pay cut to our members." BART management said they were asking ATU to bear more concessions because the station agents and train operators earn the most overtime.

A strike would have crippled the Bay Area and severely affected the regional economy. Elected officials and organized labor alike encouraged both sides to come to an agreement, and San Francisco Mayor Gavin Newsom underscored the economic fallout from such a strike, pointing out the "macroeconomic conditions and the fragility in the region, and fear people have about our recovery ... also the [impact of] millions of dollars in general funds in terms of overtime costs, parking demands."

Congresswoman Barbara Lee said the strike would have "been a disaster for the residents of the Bay Area." ATU is the largest labor organization representing transit workers in the U.S. and Canada. It has 180,000 members in 270 locals spread across 46 states and nine provinces.

And BART is facing other problems as well: a a report has just been released by the law firm it hired to conduct an independent internal affairs investigation into the Jan 1, 2009 killing of 22-year-old Oscar Grant, an unarmed passenger who was shot in the back while lying facedown on the Fruitvale platform by a BART police officer.

The shooting was captured on video by at least half a dozen cell phone and video cameras, not counting the other cell phones that riders said were confiscated by BART officers after the shooting. The officer, Johannes Mehserle, resigned and is awaiting a murder trial in October. The report, by the Meyers-Nave law firm, criticized BART police department practices and found that BART police officers botched the incident, that they did not work as a team and that there was no leadership.

The report went on to state that BART PD's "substandard practices/procedures for the use of force investigations and personnel complaint investigations" could have contributed to the Oscar Grant killing:

If all BART PD officers knew that BART PD would relentlessly investigate use of force incidents, including pulling of video and canvassing the scene, it is doubtful that BART PD officers would use force when it was not reasonable to do so. ... officers are left to their own devices and reporting thresholds. There are no obvious consequences for underreporting the use of force.

The report called the tactics of the BART police at the field level "seriously deficient" with many mistakes by both officers and brass.