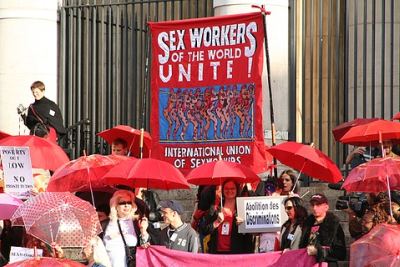 Sex workers exist in every corner of the world, but they're typically relegated to the outer edge of their communities, besieged by stigma, violence, exploitation and police oppression.

Yet for all those workplace hazards, the world's oldest profession is not a union shop. When it comes to exercising their labor rights, sex workers face a minefield of political and cultural barriers.

In Australia, where prostitution is generally legal, sex workers with the Scarlett Alliance have campaigned for comprehensive government healthcare and against social and political discrimination against sex work.

Brazil's National Network of Sex Professionals has become an international model for advocacy on an array of human rights and public health issues facing prostitutes, including the HIV/AIDS pandemic and police brutality.

Sex worker organizing is a different animal in the United States, where the word “prostitute” connotes crime, sin and images of Third World slavery.

Still, American sex workers are steadily lifting their profession out of the underground and into the public consciousness. The Sex Workers Outreach Project, for example, works in various cities to develop peer-support networks, advocate for the decriminalization of their work, and raise awareness about health and safety threats facing sex workers.

Sex workers occupy a unique space on the economic landscape, fraught with questions of human rights, social values, and the dividing line between exploitation and labor. Policies governing the industry range from outright bans (the United States) to varying degrees of regulation and legality (across Africa, Asia, Europe and South America).

But the business of sex always involves exposure to abuse, trafficking, health risks as well as institutional oppression by state authorities. While sex work in many cases involves coercion, activists say traditional feminist ideology paints the phenomenon as inherently victimizing. That approach ignores the underlying economic and social factors that push people to become sex workers, as well as their right to self-determination.

So in a vocation that wavers between shame and empowerment, how do sex workers fit into the labor movement?

Gregor Gall, a professor of industrial relations at the University of Hertfordshire, applied a labor analysis to the history of sex workers' movements, which date back to prostitute advocacy organizations in the 1970s. Today, under the emerging radical “sex work discourse,” he wrote in Frontline:

Sex workers are not viewed necessarily as victims or as helpless. Rather, they are conferred with rights and legitimacy. What makes the manifestations of this discourse so notable is that sex workers are fighting themselves to achieve its further dissemination and influence.

A union movement is just beginning to crystallize in the sex sector. Sex workers in Argentina, Holland and India have established formal labor associations. The International Union of Sex Workers, founded in 2000 in London, has earned recognition from the Trades Union Congress and been incorporated into Britain's GMB union.

The International Labor Organization has not focused on sex services as an arena for unionism, but addresses sexual labor in the context of marginalized workers on issues like human trafficking, women's rights, and reproductive health.

Beyond contracts and wages, efforts to unionize sex workers aim to bring dignity to an invisible community.

In Turkey's sex sector—which is technically legalized but loosely regulated (as many as 100,000 people work outside the official registration system)—sex workers are organizing to resist violence and exploitation. At the same time, Hurriyet reports, activists frame unionization as one aspect of a broader civil rights movement.

Buse Kılıçkaya of the Ankara-based Pembe Hayat Lesbian Gay Bisexual Transgender Association said that transsexuals and transvestites face especially high risk of harassment and violence from both clients and police. While sex labor should never be coerced, Kılıçkaya said,

People should have the right to voluntarily choose to be a sex worker. One has to have sovereignty over his or her body...

There is a social consensus that if you are a sex worker, then you deserve to be exposed to violence, sexual harassment and discrimination.

Sex work presents critical, and perhaps necessarily uncomfortable, challenges for the labor community. Amid rapid globalization and the rise of the informal economy, new forms of organizing have emerged, like immigrant worker centers and community-based workplace justice campaigns.

Meanwhile, unions have allied themselves with social change movements by invoking the language of human rights. But does that solidarity extend to workers whose humanity has never been fully recognized?

As the economy evolves, so does the way we define and value labor. It may be time to start seeing the world's oldest profession in a new light.