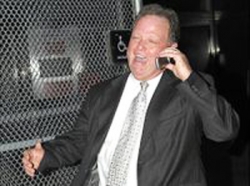 Michael J. Forde, the district council’s former executive secretary-treasurer, was fired by the union one week after his indictment was announced.   (Photo from bitterqueen.typepad.com.)

By Wall Street standard’s, it was barely lunch money. Only one million bucks or so changed hands, the feds say.

What did the money buy?

It allegedly bought handshakes from a bunch of New York City carpenters union officials for deals that benefited contractors and cheated their members.

Officials at the union, the full name of which is New York District Council of Carpenters and Joiners of America, allegedly allowed contractors to undercut union pay rates and to avoid contributing toward members’ benefits. They let them hire undocumented workers and others who do not belong to the union for jobs where the workers were supposedly union members.

And then they allegedly kept the scam going by warning the contractors about visits by union investigators, by handing out union cards to non-union members, and by destroying documents.

It was a neat financial deal for a handful of contractors, most of whom were not named in the August 5 indictment by the U.S. Attorney’s office in New York City.

They got to save millions in union salaries and benefits, the government says. Indeed, it was a boost that helped one of them became “one of the largest union drywall subcontractors in New York City,” according to the government.

Like I was saying a minute ago, it wasn’t much by Wall Street standards.

But when union officials allegedly steal from their own it is different. The wound is deeper. It lingers on and gains mythic proportions because labor’s foes seize on each morsel of corruption to condemn organized labor as a whole.

And at a moment when labor should be climbing back on its feet, it’s stuck fighting nasty attacks on its character. Which is another reason I wonder whether it makes sense to repeat the bad news here.

Richard Hurd, a labor expert at Cornell University, agrees that news of union corruption becomes a plague without a vaccine in the hands of organized labor’s opponents.

But there is also something unions can do besides dealing with bad news, he says. They can set ethical standards and police them, which is something, he says, that some unions don’t do enough of.

What happened after the feds announced their charges against the heads of the Carpenters Union District Council, seven other union officials, a contractor and a contractor’s representative?

Within days, the union ousted the district council head and two other top-ranking union officials. Twice before the council head, Michael J. Forde, had faced bribery charges. One case ended in an overturned conviction and the other in acquittal.

So years later, a local union is pulled in again by the government on corruption charges that do not seem to have changed over the years. It’s not good for labor. That's why I wince even talking about it.

But is it better to play deaf and dumb? What do you do?