Toyota to Close Only Union Factory In U.S. 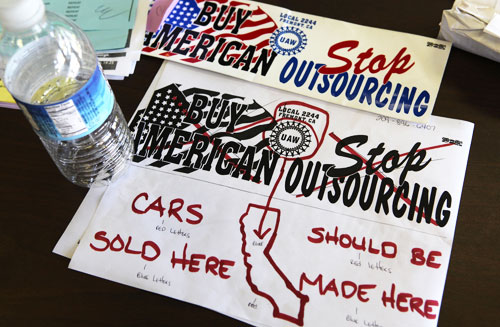 A mock-up of a bumper sticker to help keep the New United Motor Manufacturing (NUMMI) plant open. The plant is located in the San Francisco bay area.   (Photo by Justin Sullivan/Getty Images)

There will be little celebrating come Labor Day for the thousands of union workers who’ve been anxiously waiting for the news they did not want to hear: In March, Toyota will close its New United Motor Manufacturing (NUMMI) plant in Fremont, California.

It's the company's only unionized plant in the United States.

Despite public pleas from lawmakers, including the governor, the world’s largest automaker is closing its California plant. It’s the first time in the automaker’s 73-year history that it has closed a major plant. The move will effectively shut down the last vehicle assembly line on the West Coast.

Toyota stated it will move production to its other plants in the U.S., Canada and Japan. Almost 5,000 workers, represented by the United Auto Workers Union Local 2244, will lose their jobs.

The ramifications of the closure are enormous. California Lieutenant Governor John Garamendi estimates that at least 35,000 Californians will be affected.

Despite the announcement, Garamendi said he remains “optimistic” that a resolution can be reached “between Toyota, their workers, their vendors and California.”

About 1,189 companies supply parts and services to NUMMI – 871 of them in the Bay Area and Central Valley.

“California and Toyota have a special relationship. California is one of Toyota’s biggest global markets and the NUMMI auto plant is one of their more efficient, indirectly employing 25,000 to 35,000 hardworking Californians,” Garamendi said in a statement released yesterday.

Corbett said a closure to the plant would devastate families and cause “destructive reverberations throughout California’s economy.”

The plant opened in 1984 as part of a joint venture with General Motors. In June, GM used its bankruptcy to pull out of its contract with NUMMI.

Akio Toyoda, company president and the great grandson of Toyota’s founder, had said that he would try to keep the plant open following GM’s departure.

Workers assembled 420,000 vehicles a year – the Toyota Tacoma pickup, Toyota Corolla compact and up until this month, the Pontiac Vibe. The company has five other factories in the U.S., in Texas, West Virginia, Indiana, Kentucky and Alabama.

The ripple effect of the closure will be enormous. California is in a series of deep and crippling budget cuts, a double-digit unemployment rate. Businesses are struggling to keep their doors open.

Toyota has long said that it does not shut down factories or lay off workers and that it protects jobs. But the company’s sales are down 38 percent just this year.

Atsushi Niimi, Toyota’s executive vice president in charge of North America, said in a statement: “It just would not be economically viable to continue the production contract with NUMMI. This is most unfortunate, and we deeply regret having to take this action.”

The company, which plans to cut auto production worldwide by 10 percent,  faces a second year of record losses. “We want to do everything possible to avoid a third consecutive year of losses,” Toyoda said in June.

Garamendi is nearly begging the company to stay in California:

Toyota needs to know unequivocally that Californians want them to stay and we are willing to work for it. The Treasury Department needs to release federal stimulus dollars to show Toyota they are a vital California and U.S. business partner.