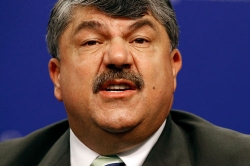 AFL-CIO Secretary-Treasurer Richard Trumka takes questions after his August 31 speech in Washington, D.C. about a new push by the organization to attract young workers.   (Photo by Chip Somodevilla/Getty Images)

Young workers are less secure, more financially squeezed and more worried–but also more geared up to work for progressive political goals–than their counterparts a decade ago, according to a new survey by Hart Research for the AFL-CIO’s Working America, the union federation's 3 million member community affiliate.

The federation, under its probable new president and current secretary-treasurer Richard Trumka, plans a major campaign starting this fall to reach out to and understand young workers, who are more sympathetic to unions but less organized than workers 35 or more years old.

In a speech Monday at the Washington headquarters of the Center for American Progress think tank, Trumka said:

It’s to reconfigure ourselves to respond to the needs of a new generation of working Americans....

But when they look at unions too often what they see is a remnant of their parents’ economy -- not a path to succeed on their own. This is the issue that will decide the future of the American labor movement.

We all hear a lot about unions coming back into the AFL-CIO -- and that’s a personal priority of mine – but, ultimately, it won’t matter how many unions are in the AFL-CIO if we fail to capture the imagination of millennials.

The harder conditions and gloomier outlook in the new Hart survey partly reflects the contrast between the1999 boom and the 2009 bust. But all was not well for young workers (18 to 34 years old and working or looking for work) a decade ago, and their problems were growing during the Bush years.

More than a third–half of low-income workers–live with their parents.  Nearly a third have to delay education or professional development, yet roughly a fifth work outside their chosen field or in jobs for which they’re overqualified.

They strongly prefer public investment to create jobs over reducing the deficit. And by a 50 to 23 percent margin, they think workers are better off with a union. They support Obama and identify with Democrats much more strongly than older workers.

Clearly, the younger workforce offers huge potential to unions to organize blue-, pink-, white-, and no-collar workers, though their mobility among jobs poses a challenge.

But for growing portions of the workforce, unions will need to change culturally as well as tackle new issues. Trumka’s strategy could prove valuable if it is not a superficial public relations move and instead deeply engages the rising generation of workers. Only time will tell.