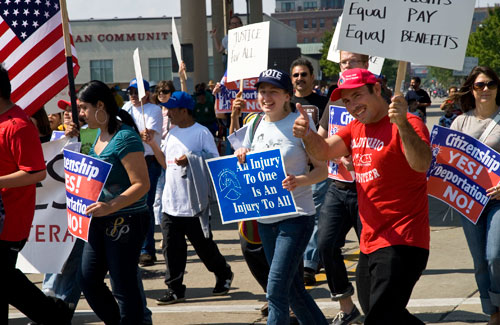 Under the influence of successively less articulate, less visionary, and less militant leaders at the top of the AFL-CIO (Phillip Green, George Meany, and Lane Kirkland), America's organized labor movement increasingly lost its ability to inspire virtually anyone.

Reaching the public through the media? We don't negotiate through newspapers.

Jobs going to the South, Mexico and China? Those people are too ignorant and unskilled, and the companies will bring those jobs back. Just you wait.

For decades marked by this kind of complacency and arrogance, labor had no enobling rhetoric, no rallying cries, and no symbols of the courage of working people. (I recall a huge 1980 rally with tens of thousands of unionists present; I saw a single poster from the 1977 movie "Norma Rae" as the only visual expression of what labor stood for.)

That's why Milwaukee's Labor Day march was such a remarkably uplifting event.

There were thousands upon thousands of union members in the city yesterday, wearing bright t-shirts representing their union contingent. Many carried signs calling for a public option for health care.

There was a powerful sense of pride in being part of a vibrant, active, and massive movement that represents working people of all races and is on the side of economic and social justice.

Yet at this particular moment, the labor movement faces a daunting set of challenges. As former mineworker Richard Trumka gets ready to become AFL-CIO president on Sept. 16, he will confront a set of urgent and massive challenges:

Thus, labor needs Obama to pressure Corporate America to halt the tide of layoffs and outsourcing that is highly unpopular with the public.

And workers seeking to counter the wave of plant closings and relocations are receiving far too little help from the national AFL-CIO in building alliances with their communities, which also stand to suffer hugely.

Unless local unions get considerable help developing clear messages and building grassroots coalitions, corporations will find it all too easy to relocate while blaming labor "intransigence" and further eroding labor's public standing.

With Rich Trumka, labor will have a much more youthful, articulate, and militant face. He will need to hit the ground running.

But given the way labor is changing at the grassroots level as displayed in Milwaukee on Labor Day, he is likely to find a movement profoundly hungry for substantive action to challenge corporate power.