Why Not Cover Undocumented Migrants? 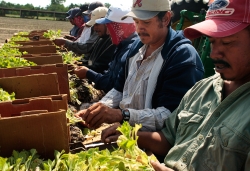 Migrant workers plant tobacco from the back of a planting machine.   (Photo by Chris Hondros/Getty Images)

The president was telling the truth, of course: undocumented migrants are pointedly excluded. If we do get a public option, they won't be eligible.

The political calculus is obvious. Americans are in an ugly mood and nothing riles up the bigots like the prospect of subsidizing "illegals." What they don't realize is that it would probably cost more to exclude undocumented migrants than to allow anyone to pay into the public option, regardless of citizenship.

First off, illnesses and accidents don't discriminate by status, and unpaid medical bills drive up prices for everyone.

More importantly, insurance is about spreading risk. All else being equal, the more premium-paying members an insurance plan has, the cheaper it will be for everyone.

That's why Obama is so insistent on an individual mandate, i.e., a law that would require everyone to carry insurance. Last night, the president accused young, healthy people without insurance of "gaming the system."

In effect, they are. They know that they're probably not going to need much in the way of care, so their monthly premiums seem like throwing in money for nothing. So, they opt to wait until they're older when they expect to be at greater risk.

The thing is, you need a lot of those money-for-nothing payers in order to offset the sick people. If you only insure sick people, you're not really spreading the risk. In theory, a mandate drives down costs for everyone by forcing the good risks to pull their weight.

As a group, migrants tend to be young and healthy. Young healthy people are the A-list glitterati of the health insurance industry. Migrants are an especially desirable demographic because so many return home before they get to the inevitable "old and expensive" phase of life.

Aside from spreading risk, sheer size is a boon to a health insurance plan. The more people covered, the bigger the economy of scale when the plan negotiates with doctors, pharmaceutical companies, and other providers. Whether you're buying toilet paper or coronary bypasses, you save when you buy in bulk.

A public option isn't charity. Last night, the president stressed that any public option would finance itself with member premiums, just like a for-profit insurance plan. So migrants who paid their premiums would be pulling their weight just like everyone else. Private insurers don't ask if you're a citizen before they sell you a policy. Why should the government care?

Society can subsidize uninsured migrants after the fact, or it can give them a chance to pay their own way and possibly reduce our own insurance costs in the process. Universal healthcare is in everyone's best interest. There's no good economic reason to make eligibility contigent upon immigration status.