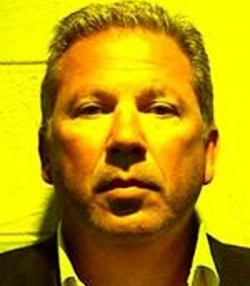 Last December, the former president of Republic Windows and Doors factory was thrust into the national media spotlight after more than 250 unionized workers at the Chicago plant occupied their workplace to demand the severance pay, benefits and back pay owed them by law.

Gillman was arrested at his condo in Chicago Wednesday morning and charged with felony theft and money laundering, among other things. He is accused of stealing manufacturing equipment from the Goose Island plant to open a non-union factory in Iowa. A judge has set Gillman's bond at $10 million, an amount he's unlikely to post—meaning he'll remain in jail. (Gillman is appealing the bond amount, the AP reported.

In a bond hearing this morning, prosecutors testified that Gillman, along with other company officials, absconded with 10 semi-trailers full of equipment and conspired to launder company money through shell corporations to avoid paying out its creditors, which include JP Morgan Chase, Bank of America, and General Electric. The charges against Gillman include mail fraud, money laundering, organizing and continuing a financial crime enterprise, and felony theft charges.

Workers took over the factory after Gillman said he couldn't pay workers more than $1 million, in part because Bank of America refused to extend credit to keep the factory open. Remarkably, the conflict ended happily for workers after bailout-recipient Bank of America and other creditors extended financing to the company, which sold the Chicago factory to a California company named Serious Materials this spring, as Working In These Times has reported.

From the very beginning of the conflict last December, UE representatives alleged that Republic violated law by removing machinery from the plant as it closed. Indeed, just as he announced the closing of the Chicago factory, Gillman was establishing a separate business, Echo Windows & Doors, LLC., and planning to relocate Republic production to a nonunion plant in Iowa. (For the full story, read this David Moberg story from December.)

Echo "received manufacturing equipment transported within three semi-trailers belonging to Republic Windows & Doors, LLC, without the approval of the board of directors and the creditors," documents say.

There is evidence that "the arrestee committed acts including organizing, supervising and participating in a conspiracy to conceal and obtain collateral belonging to Republic Windows & Doors, LLC," the court records say.

All of this confirms what Republic workers suspected all along. "We feel like justice has finally come and we all hope that this is the beginning of more bosses being held accountable for their crimes against workers," Melvin Maclin, Vice-President of UE Local 1110 and a former Republic Windows and Doors worker, said today.

UE Local 1110 President Armando Robles also avoided gloating—it's not often oppressed workers get to see their boss go to jail: "We knew Gillman was lying to us for a long time, now the rest of the world knows it too," Robles said today. "Workers suffer with bad bosses all the time so this is a victory for all workers."