Specter In Pittsburgh: Punishment and Reward at AFL-CIO Convention 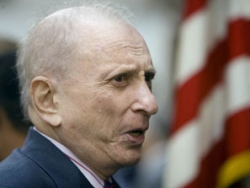 “More than ever before, we need to be a labor movement that stands by our friends, punishes its enemies, and criticizes those who, well, can’t seem to decide which side they’re on.” --Rich Trumka, in the Washington Post Sept. 7, 2009

PITTSBURGH - When the history of the bi-partisan undermining of the Employee Free Choice Act (EFCA) is written, Pennsylvania Republican-turned-Democrat Arlen Specter will be assigned a pivotal role.

Back on March 24, when he was still in the GOP, Specter announced that he was no longer going to be the much-prized 60th vote for “cloture” on EFCA. That’s the procedure Senate Democrats will have to employ sometime later this year to overcome a Republican filibuster, and make what retiring AFL-CIO President John Sweeney was still predicting on Sunday would be “the greatest advances in labor law reform in 70 years.”

In 2007, Specter supported bringing EFCA to the floor for a Senate vote, after it was passed overwhelmingly in the House. But according to the same Senator in March, “the problems of the recession” make this year “a particularly bad time to enact Employees Free Choice.”

In organizing campaigns, where NLRB elections have been by-passed and “card check” used instead to demonstrate majority support for unionization, Spectre said “there has been “widespread intimidation” by “union officials” when the latter “visit workers’ homes with strong-arm tactics and refuse to leave until cards are signed.”

To deal with this alleged coercion, Specter recommended making it an unfair labor practice for any “union official” to visit “an employee at his/her home without prior consent for any purpose related to a representation campaign.”

While letting everyone know in March that he was no longer for cloture, Specter also positioned himself to play a key role brokering a compromise with colleagues like Tom Harkin and Chuck Schumer, who might “choose to move on and amend the NLRA” in ways more acceptable to Arlen.

With a labor law reform record like this, Specter would seem to be just the kind of politician who needs a little labor “punishment” to send a message to the rest of his wavering breed — particularly since he now faces a Democratic primary challenge next year by a pro-EFCA congressman.

In several recent interviews, new AFL-CIO president Rich Trumka indicated that he favored holding politicians more accountable, “so they don’t listen to the moneyman and continue to erode away or negotiate away” key labor goals, a trend most evident lately in healthcare reform.

Nevertheless, here we are at the Pittsburgh Convention Center, on day three of the AFL-CIO’s quadrennial meeting, listening to that same Rich Trumka give a warm welcome to none other than Arlen Specter. From Trumka, we learn that his friend Arlen has been a rare “pro-labor Republican” for years.

From the wrinkled, frail-looking 79-year old Specter, we get a quick recitation of his past responsiveness to top union officials when job safety and health enforcement, or some other federal government function of benefit to workers, was under siege by the string of Republican presidents that he helped elect (two Bushes and a Reagan).

Today, the senator noted, he was working for a “robust public option in healthcare,” sanctions on imported Chinese tires, and emission standards that wouldn’t jeopardize jobs in coal mining, steel making, or other manufacturing.

On the matter of what he called “employees’ choice,” Specter reassured his audience that his latest position—spelled out in little detail—met the three standards set forth by Trumka, in a Sept. 5 New York Times article headlined “Union Head Would Back Bill Without Card Check.” (That was a reference to Sweeney’s own Labor Day weekend expression of willingness “to accept a fast election campaign instead of card check.”

As described by Specter, Trunka’s three minimum requirements for “labor law reform” now include “prompt certification,” “tough penalties,” and “binding arbitration” of first contracts. According to Specter, a half dozen Senators, plus himself, Harkin, and Schumer, are working on a new version of EFCA that will “be totally satisfactory to labor.”

Specter both referenced —and was aided in his performance— by a local headline today announcing an impending Right-to-Work Committee “ad blitz” directed at him and the now abandoned “card check” method he criticized, much like the RTWC, back in March.  A full-page ad in yesterday’s Post-Gazette, run by the business-backed “Coalition for a Democratic Workplace,” still urged Specter to “oppose any versions of the job-killing” EFCA that would “shift power from workers to union bosses” or give “government-appointed bureaucrats more control in setting wages.”

These costly exertions by the anti-EFCA lobby reflect quite a different stance than elements of corporate America have taken vis-à-vis health care. In that ongoing “reform process,” labor defenders and facilitators of compromise (like SEIU leader Dennis Rivera) can at least point, as President Obama does, to what they consider to be positive movement on the part of some management players. When the subject is labor law reform —either as originally conceived or sans card check— the labor concessions made so far, brokered by the likes of Specter, have yet to be matched by anyone speaking for the employer side.

In the meantime, President Obama, who also addressed the convention today, is flying off to Philadelphia with his arm around Specter. They’ll be there together tonight at a big Specter re-election fundraiser, where Obama will be offering the same kind of reward for Specter’s party-switch that the AFL-CIO is prepared to give as well, in the hopes of getting EFCA-Lite in return.