Principle and Power Plays: the Situational Ethics of Union ‘Raiding’ 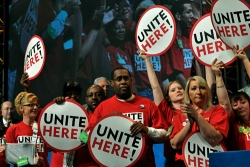 Back in the fold: UNITE-HERE members at the AFL-CIO convention in Pittsburgh Thursday, the day the hotel and restaurant workers union returned to the "House of Labor" after four years in Change to Win.   (Photo by Bill Burke/Page One)

PITTSBURGH—No subject ignites the passions of labor officialdom more than “raiding.” In his blustery maiden address as president of the AFL-CIO, Rich Trumka won thunderous applause this week at the federation's convention in Pittsburgh by announcing that anyone daring to “raid an AFL-CIO [affiliate] will find 1,000 organizers coming to the rescue of that union.”

In trade unions that too often treat their own members like chattel, there are few threats greater, within the “house of labor,” than an affiliate which tries to steal the dues-paying “property” of another.

The very term used to describe this activity conjures up images of unfriendly Native American visits to the first European colonies in North America. In labor circles, “raiding” almost always has a negative connotation.

Unless, of course, your own union is the one dispatching the “raiding party."

The AFL-CIO has had “no-raiding” rules in effect for 54 years. For the last half century, this has made it much harder for legitimately disgruntled workers to switch unions. They could only replace their existing bargaining representative with an “unaffiliated” union (such as the United Electrical Workers or the National Education Association), form a small independent union of their own, or hook up with a former AFL-CIO affiliate.

A number of major unions have ended up in that last category since 1955. A few have been expelled for corruption (like the Teamsters and other mobbed-up labor organizations in the late 1950s).

Some unions disaffiliated and then regrouped with other defectors in formations such as Walter Reuther's short-lived Alliance for Labor Action (that included the racket-ridden Teamsters) or Andy Stern’s four-year old Change To Win, now equally troubled and down to only five of its original seven unions.

Whatever their roots or rationale, schisms in the “house of labor” are invariably accompanied by much-feared “rogue union” activity.

That’s why, in Pittsburgh this week, AFL-CIO conventioneers called a brief halt to an endless stream of speeches and resolutions about corporate misbehavior to deal with a menacing labor miscreant and outlier—Doug McCarren’s United Brotherhood of Carpenters (UBC).

The 500,000-member UBC left the AFL ahead of other CTW unions, saying its per capita dues were being wasted on the ineffective “New Voice” programs of John Sweeney. Then, in 2005, it joined CTW. Then, last Fall—in a development concealed by CTW until this month--the UBC stopped paying dues to Stern’s new federation as well.

A week ago, McCarren made it official—he’s now out of Change To Win too, several steps ahead of John Wilhelm’s UNITE-HERE, which reaffiliated with the AFL-CIO yesterday.

In the meantime, McCarren’s critics say, he has been undercutting AFL construction unions by offering contractors wall-to-wall labor agreements designed to replace other skilled tradesmen with his own members, who will be employed for less pay under more “flexible” work rules.

Not surprisingly, this has made his fellow building tradesmen--plus manufacturing and even public employee unionists--quite irate.

Mike Sullivan, general president of the Sheet Metal Workers, was among those who took the mike Wednesday in Pittsburgh to denounce the Carpenters and bemoan his union’s expenditure of “millions of dollars defending the rights of members who don’t want to be in their union.”

Tom Buffenbarger, president of the Machinists (IAM), declared that “this is not just a building trades issue. This is an issue for all others” in the federation (as indeed it is, since the IAM has been poaching truckers from the Teamsters in the Midwest!)

These more conservative speakers were joined by former UE organizer Ken Allen, now the top AFSCME official in Oregon and a past Labor Notes conference participant. Allen blasted both the UBC and SEIU, headed by Andy Stern. (Stern’s top-down “modernization,” centralization of control over bargaining, and forced consolidation of locals has often been compared to the Carpenters’ own restructuring under McCarren).

Allen told the convention that affiliates “who left in 2005 opened the door for all kinds of trouble… SEIU and the Carpenters are doing the bosses’ work when they raid our unions.”

All of these speakers favored adoption of Resolution 70, which calls for the creation of an AFL-CIO-backed “Carpenters’ Organizing Committee”—if and when the UBC fails to return to the fold, and, henceforth, stick to its own jurisdiction.

The resolution was passed unanimously. Its sponsors are clearly hoping that the Carpenters’ “raiding” of them will be curbed by the AFL-CIO threatening to recruit carpenters to a new entity that would compete with the UBC (a move some might call “raiding”).

Opinion was divided on the likelihood of this happening. An Operating Engineer from Chicago expressed skepticism about the COC scheme and demanded to know why other Change To Win defectors weren’t getting similar treatment.

Sal Rosselli, interim president of the National Union of Healthcare Workers formed last winter to replace SEIU in California, was at the convention as a guest. He certainly would have welcomed material aid for NUHW’s challenge to Stern—the product of real rank-and-file initiative and workplace organizing, not mere resolution-passing by the AFL.

Overlooked in the Resolution 70 debate was one bit of insight into the dynamics of inter-union competition—and a positive effect often unappreciated even by those on the left in labor.

“The UBC president has made me a better representative,” said a Painters’ union official from Philadelphia last Wednesday (while still decrying the $9 million his union had spent keeping the UBC at bay).

The Painter was admitting to other delegates that McCarren had forced him to work harder and be more responsive to his members’ job-related concerns. If he didn’t, the siren call of the Carpenters might succeed in luring them away.

And that’s exactly why all so-called “raiding” is not merely employer-assisted, business union poaching. Raiding can also take the form of a workers liberation movement—like the bottom-up effort of California healthcare workers to build the NUHW as an alternative to SEIU, after the latter took over their local, stripped them of elected leaders down to the steward level, and proceeded to offer McCarren-style contract concessions to hospitals and nursing homes that previously had to deal with a more aqgressive union.

If the UE hadn’t “raided” the company union that previously represented (in shoddy fashion) the workers at Republic Windows and Doors in Chicago, would there have been a factory sit-in last December and a now-successful campaign to keep the plant open under new ownership? I doubt it.

If there was more “employee free choice” of unions among the already organized, we might even see more workplace situations where solidarity, unity and “fighting back” aren’t just words in a resolution.