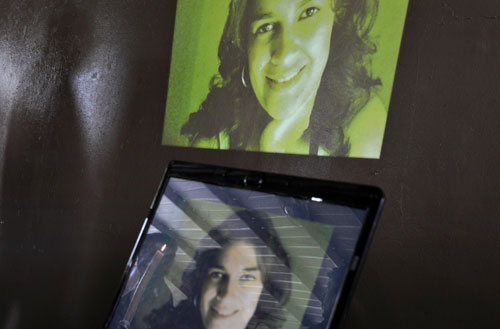 Supporters of ousted Honduran President Manuel Zelaya are reflected on a monitor showing a picture of Wendy Elisabeth Avila—an alleged victim of noxious gases inhaled during a protest—during her wake in Tegucigalpa, Honduras, on September 27.   (Photo by MAURICIO LIMA/AFP/Getty Images)

The tense standoff in Honduras has entered its second week. The latest phase of the crisis began last Monday, when the country's democratically elected president, Mel Zelaya, slipped back into the country last week after nearly three months in exile following a military coup on June 28.

Zelaya has taken refuge inside the Brazilian embassy, in the capital city of Tecucigalpa, from where he is calling on his supporters to rise up against the ruling junta and restore him to power. It's not clear from English-language media how serious Zelaya is about inspiring resistance, but of course, the junta is painting his utterances as incitements to armed insurrection.

The entire country was briefly placed under de facto house arrest after Zelaya's return. On Sunday the regime asserted the right to shut down any media "offending the dignity" of public officials. A new curfew went into effect yesterday.

"There has been a sharp rise in police beatings, mass arrests of demonstrators and intimidation of human rights defenders since the return to Honduras on Monday of President Manuel Zelaya Rosales," the report concluded. Hundreds of peaceful protesters have been arbitrarily detained or beaten by police, the report says.

Ten people have been killed since the coup, according to protesters. The government puts the toll at three, AP reported.

The junta has expelled several diplomats from the Organization of American States, who were sent to negotiate an end to the standoff. The regime also gave Brazil an ultimatum: Wrap up the Zelaya standoff within 10 days, or face expulsion.