A Survivor’s Story of Trafficking and Slavery 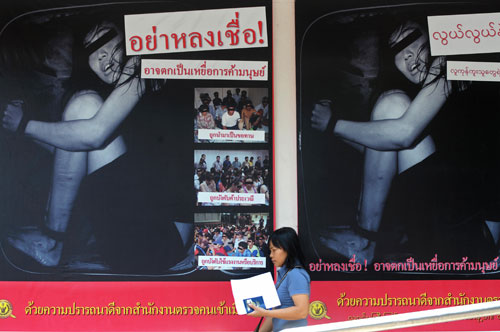 A woman walks past a giant anti-human trafficking campaign poster in Bangkok in August, 2009. Human trafficking ranks among the world's most thriving criminal activities, with an estimated 2.5 million victims 'at any given time,' according to the UN.   (Photo by PORNCHAI KITTIWONGSAKUL/AFP/Getty Images)

When Mimin came to the United States from Indonesia, she expected to work as a housekeeper for a wealthy family in Los Angeles and send money to her parents back home. But the 17-year-old soon found herself enslaved in domestic servitude, working long hours, seven days a week, without time off.

Her poignant story was told on American Public Media’s “The Story” last week; it’s a riveting tale of Mimin’s seven years of forced labor and her amazing escape.

The tale brings to light the horrors of forced labor as well as the work of an organization called CAST, or the Coalition to Abolish Slavery and Trafficking, which provides legal and social services for survivors of slavery and trafficking.

Some 50,000 people like Mimin are trafficked into the United States each year, according to CAST, which founded the first shelter designed for the needs of survivors of these crimes.

Many wind up in sprawling L.A., where it is difficult for law enforcement to find victims. Some 10,000 are forced into sex work, but many are also domestic slaves and sweatshop workers.

CAST reports that about 27 million people around the world are enslaved. Check out this Working ITT post by Michelle Chen about human labor and trafficking problems around the world.

Most of the men, women and children who are victims of trafficking wind up in Japan, Australia and the United States. (California, New York, Texas and Nevada are the states attracting the most trafficked labor, but it also occurs in states like Iowa and Ohio.

Mimin was eventually able to escape her captors with the help of a vigilant neighbor and CAST. But it’s frightening to think she lived in a wealthy area of a major metropolitan city, unnoticed for years.

Portraits of Workers Around the World

Check out another great radio project about labor and work by Homelands Productions. It features a series of audio portraits of workers—from lobster diver to pirate to chocolate taster. I came across this series via the Third Coast International Audio Festival’s weekly radio show Re:sound.