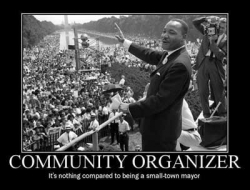 Community organizers have had a very rough year.

First there were the derisive remarks by Republicans during last year's campaign (Sarah Palin: "a small-town mayor is sort of like a community organizer, except that you have actual responsibilities"). Then candidate John McCain and his party did their best to smear ACORN, the Association of Community Organizations for Reform Now, by trumpeting reports of fraudulent voter registration cards filed by a handful of ACORN canvassers.

Last month, conservatives targeted the national organization again, releasing damning videos showing ACORN workers apparently encouraging prostitution and tax evasion. Congress sprang into action, denying federal funding to ACORN and its affiliates. (As Christopher Hayes of The Nation noted, during the last 15 years these organizations have received about $3.5 million per year, or about one-millionth of this year's budget.)

As Randy Shaw wrote Monday in an article surveying the impact of ACORN's de-funding and current troubles, "the entire progressive movement will be impacted by the potential loss of ACORN's role as one of the nation's leading entry points for young people seeking community organizing careers."

Enter Organizing Upgrade. The new online project, which launched October 1, aims to brings together established community organizers and progressive strategists from around the country to talk about the challenges facing their efforts to build a better world.

"We are creating a space for community organizers and activists to share ideas, analysis, and strategy across the U.S.," said Harmony Goldberg, who created Organizing Upgrade with Sushma Sheth, and Joseph Phelan. "[W]e must move our values of honesty, transparency, and discourse to shape action and push back on the right's upsurge in recent times." (Goldberg is a co-founder of SOUL, School of Unity and Liberation; Sheth is a former Miami Workers Center organizer; Phelan is that center's communications coordinator.)

Planned before the recent ACORN attack (and the resignation of Van Jones, a former community organizer), Organizing Upgrade is about more than just pushing back against increasingly virulent partisan and media attacks on community organizers. The project's statement of purpose is both ambitious and timely:

As we fall deeper into the recession, the broader public is beginning to discuss the limits of capitalism, the role of financial institutions, and the parameters of the "free market." Obama's election has given community organizing a new profile and broadened the number of people who might be willing to engage in organizing for social change. The mainstream is up for grabs in a way that we haven't seen in decades. The possibilities are there, but the left and the community organizing sector need more clarity and intention to take advantage of them.

The site's off to a strong start, with a wide-ranging and sobering interview with veteran activist/writer/movement intellectual Bill Fletcher Jr. and a panel discussion with five active community organizers. Three new "upgrades" will appear on the site at the start of each month, featuring contributions from organizers and strategists working on a huge range of issues, including affordable housing, workers rights, gentrification, immigrant rights, global solidarity and labor.

Organizing Upgrade won't fill ACORN's new budget gap, or, I'm guessing, be the overdue high-profile rebuttal necessary to counter conservatives' distortions of the difficult work that community organizers do every day. (Perhaps the former community organizer in the White House could provide that.)

What project will do, it looks like, is provide an important and accessible forum where organizers can gather to think critically and honestly about their work— and the state of the left, warts and all. If the site energizes an embattled—not to mention underpaid and overworked—corps of organizers across the country, it will have done a valuable service.