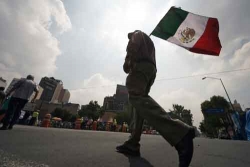 Four days after the Mexican government suddenly and dramatically shut down a major state-run electricity company—deploying hundreds of federal police officers to secure scores of facilities operated by the Light and Power Company of Mexico (Luz y Fuerza del Centro) over the weekend—workers are protesting the decision en masse in the streets of Mexico City.

The closure of Luz y Fuerza, which supplied power to the capital and its environs, affects 44,000 active workers and 22,000 retirees, AFP reported today. 50,000 protesters were expected to attend a protest march through Mexico City's center Thursday.

The government says the company is inefficient and wastes electricity, and that a larger state-run company, the Federal Electricity Commission, will take over its operations.

“Today we have to correct those things that don’t work in the country,” President Felipe Calderón told Mexicans on national TV Sunday. Calderon's administration has said federal subsidies for Luz y Fuerza are a strain on Mexico's treasury and that the president would rather spend money on anti-poverty programs.

But there's an important labor backdrop to Calderon's decision to close the company and fire thousands of members of the Mexican Electrical Workers Union (SME), one of the country's strongest. The New York Times reports:

Members of the Mexican Electrical Workers Union… marched to the presidential residence and blocked rush-hour traffic last week after the government refused to recognize the election of the union’s secretary general, Martín Esparza. The Labor Ministry has said there were signs of fraudulent voting in the election.

The closure of the electrical company effectively closes the now-unemployed workers' union, which has asked its workers to reject any offered compensation packages. The government has said up to 10,000 fired workers (out of 44,000) could be re-hired and that those out of work would receive more than two years' pay as compensation. Calderon said he has no plans to privatize the country's electricity sector, which was nationalized in 1960.

Since the shutdown, thousands of Mexicans have suffered sporadic power cuts and the union has pushed Mexico's Congress to reverse the Calderon government's decision and threatened legal action.

"They have declared war on us and we are going to respond, always exercising our Constitutional rights and guarantees, of that there is no doubt," the SME said in a statement released Sunday morning. Esparza has called Calderón's decision "unconstitutional" and a "provocation."

While we have become accustomed to the Calderón government's attacks on labor unions such as the Mexican Miners and Metalworkers Union, and its massive use of police and military force, this is not just one more incident.  This is a turning point.  The Mexican government's attack on the Mexican Electrical Workers Union -- a union central to resisting government policies and building labor and social movement coalitions, and located in Mexico City which is the center of political opposition to the government -- may well turn out to be a watershed event in the country's recent history.

Some SME members reportedly called for a general strike to shut off power to Mexico City and the surrounding region, but that has yet to happen.

Whether this bold move by Calderon, whose party lost control of the lower house of Mexico's Congress in July, will pay political dividends—or trigger widespread popular outrage beyond affected workers and unions—remains to be seen.

In the meantime, the SME has called for international solidarity to resist the liquidation and firing of 44,000 workers.