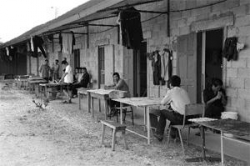 Chinese workers outside their living quarters in Cunupia, a town in Trinidad and Tobago.   (Photo from Trinidad & Tobago Express)

A group of Chinese laborers who protested unsettled payments and abject housing in the Republic of Trinidad and Tobago had their work permits revoked by their employer Tuesday, according to local media.

The move expedites their return to China after a whirlwind week in which the southern Caribbean country learned about gross labor violations akin to modern-day slavery.

The incident has highlighted the growing number of Chinese workers sent by state-owned Chinese companies (in this case, the Beijing Liujian Construction Company) to work in Trinidad and Tobago's government-sponsored projects. The conflict has spurred a debate on who is responsible for deplorable working conditions.

Both the Chinese embassy and the T&T government (along with the company) have all skirted responsibility for fear of igniting an international incident and intruding on private business matters.

The 150 Chinese nationals captivated the country October 13, when more than 70 workers were detained for shutting down the Uriah Butler Highway. The workers, contracted by Beijing Liujian, were sent from China 18 months ago to build two schools as part of a multi-million dollar contract from the T&T government.

The workers claimed they were owed two months pay, lived in deplorable housing and wanted to return to their native China. The company denied the allegations and claimed the conflict stems from a "performance deposit" that the company pays upon completion of a contract.

Beijing Liujian said the workers chose to end their contracts and are no longer entitled to their two-month deposits. The company added that workers' hourly wage of about $3.75 (USD) "was attractive and highly competitive with what is paid in China."

The company, which pays salaries to workers' families in China rather than directly to workers, reiterated that all wages had been paid.

But beyond the wage dispute, local officials and media who visited the camps in the town of Cunupia, in central Trinidad, were appalled by the inadequate living standards.

The workers' housing was registered as a warehouse and not designed for accommodation; a public health official who toured the camp found an unsanitary kitchen, without proper tiling and fly-proofing, inadequate sinks, and food placed on the ground due to lack of storage. The workers bathrooms were described as rows of "concrete latrines" and lacked private toilets and washrooms. Trinidad and Tobago's Foreign Affairs Minister Paula Gopee-Scoon described the facilities as "below the standard of living."

The fervor over the conflict sparked Bejing Liujian to employ security guards from Nigeria on Saturday, who were ordered to keep the laborers inside the camp and prohibit outsiders from entering. Charitable groups were blocked from distributing food and toiletries to the workers, and instead had to give the items over a concrete wall.

Some guards reportedly shouted obscenities at former T & T government minister Manohar Ramsaran as he attempted to give food to the workers.

Despite all the national fervor, the government responses have been sluggish. The local government has voted to debate the issue, and the Labour Minister is investigating company documents and working with the company and the Chinese Embassy.

The grassroots response has more sympathetic. Several local groups have called for a probe into all programs that use migrants; two of the biggest unions have expressed support for the workers; and one union has called for the camps' closure.

The Catholic Commission for Social Justice last week urged the Caribbean island to ensure that modern-day slavery is not occuring. "These laborers cannot be considered as a commodity or a mere work force," the commission said in a statement, Forbes reported.

But the uproar has largely left unsettled answers about who is actually responsible. The Chinese embassy has been mediating matters, but also said they would not intervene in the business affairs of the company. The public has also criticized Trinidad and Tobago's government for hiring the companies, and pressure has grown to enforce local labor laws and international regulations to which they are a signatory.

As a former Spanish and British colony, the history of slavery and exploitation has deep historical meaning. Trinidad and Tobago was the first country in the world to commemorate the abolition of slavery. The Chinese labor conflict comes straight off the heels of their annual Emancipation Day celebration in August.

Newsday, a local paper, made an astute observation in an editorial: "There is somewhat of a sick irony in the use of imported Nigerian security guards to allegedly threaten imported Chinese workers, all a mere ten weeks after Trinidad and Tobago celebrated Emancipation Day."

The workers were left vulnerable by the absence of institutions to ensure their welfare, highlighting the necessity of resources and organizations to help navigate the delicate issues that arise when dealing with trans-national labor issues.

The country was shocked by their conditions; hopefully there will be more safeguards put in place so this won't happen again.