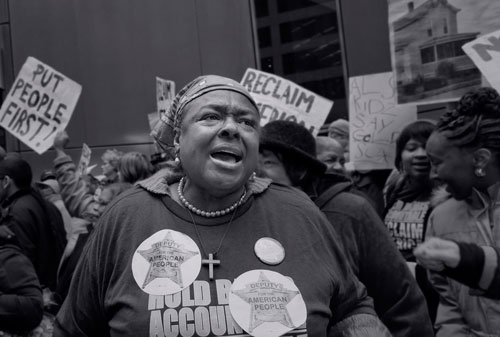 Carolyn Stanley traveled from Syracuse, N.Y., to protest unfair banking practices in Chicago this week. "I'm tired of people losing their homes and threatening our whole neighborhoods," she said. "This protest is the only way we have to tell [banks] that enough is enough."   (Photo by Peter Holderness)

CHICAGO—The 500 or more people who gathered across from the Sheraton Hotel in downtown Chicago Sunday evening and again on Monday weren’t bankers, like the members of the American Bankers Association holding their convention inside the hotel. But they knew something about banking–from the dirty end of the stick bankers wield.

Some had been trapped in a costly whirlpool of high-interest payday loans. Others had lost homes to foreclosure when mortgage payments suddenly exploded. Many had watched neighborhoods deteriorate as homes remained empty and abandoned. They had seen much of their individual savings or union pension fund evaporate.

They had lost vital public services as the recession triggered by the financial crisis forced budget cuts, while trillions in public funds and guarantees saved the banks—and now many of them are posting fat profits and plan multimillion bonuses for executives.

“If I robbed a bank, I’d go straight to jail, and they’d throw away the key,” said Keya Alvarez of Springfield, Mass. “But when bankers rob the American people, they’re living in luxury. How is that right?”

“Enough is enough,” chanted the crowd, a rainbow of ages, ethnicities, and regions, most of modest economic means. “Bail out/No banks/Bust up/Big banks.”

“This is the single biggest mobilization of people since the bailout,” said George Goehl, executive director of National People’s Action, a network of community organizations that had organized the protests. “If we want to win, to hold the banks accountable, this has got to be the beginning, not the end.”

Indeed, ten times as many protestors are expected Tuesday morning when labor unions, including the AFL-CIO, the Service Employees (SEIU) and others, join community groups in protest against the ABA’s lobbying in opposition to most financial industry reforms. And in the weeks following NPA and allies will target branches of the five big banks across the country, then send a large group to Washington with, as Goehl said, “the message to Congress and Obama—which side are you on, the people or the banks?”

So far banks and other financial corporations have used their well-funded, well-placed influence with both parties to block or water down most reform.  But there are a few champions of financial accountability. On Sunday, Sen. Richard Durbin of Illinois spoke to the crowd about his ongoing commitment to a variety of reforms—capping interest rates on loans, cutting out bank middlemen to loan money directly to students, setting up a consumer financial protection agency, and giving courts the right to modify mortgages for individuals in bankruptcy.

“Two times the bankers beat us [on judicial modification],” Durbin said, “but I ain’t giving up.”

The issue goes beyond bank and finance reform to eliminate past abuses and systemic risk and to make banks more accountable to the people. It’s also a question of, as SEIU Illinois director Tom Balanoff said, “what kind of recovery do we want?”

NPA’s main foci are breaking up the big banks, judicial modification of mortgages, and modernization of the Community Renewal Act (an NPA victory 30 years ago, which forces banks to lend in their home communities).

But Goehl says, “I actually think this is building from bank accountability to a campaign for a new economy.” For example, a Peoria, Ill., minister and community leader said on Sunday: “In addition to learning how to fish, we want to own the pond, and we want banks to provide our money so we can stock the pond.”

It’s taken a long time for bank protests to emerge, partly because so few organizations had expertise in the area or a means of quickly educating and mobilizing members and the public. But now NPA is just part—though an important part—of a much-needed campaign for a new banking system, and a new economy.