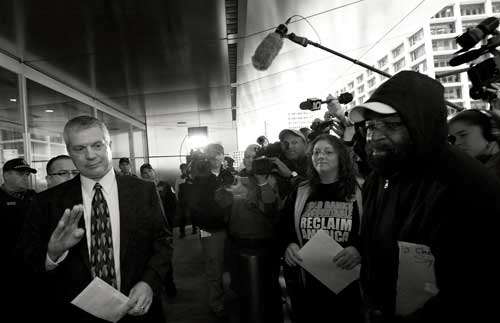 Activists deliver a letter of demands for fair banking practices to an executive at Goldman Sachs' Chicago office on Monday.   (Photo by Peter Holderness for In These Times)

CHICAGO—After working for 42 years, Erma Hall-Wood thought she had earned a modest but peaceful retirement. Then the financial crisis devastated her savings and the 68-year-old Los Angeles County Department of Health retiree became one of millions of Americans who have lost their homes to foreclosure.

"I thought I would have a decent home," Hall-Wood said during today's "Showdown in Chicago" protest outside Goldman Sach's office, in the city's financial district. "I'm hurting."

She was joined by a few hundred protesters from around the country who stepped out of a half-dozen yellow school buses promptly at 10:30 a.m. this morning to demand tighter financial regulations, aid to struggling homeowners, and an end to bailed-out bank bonuses.

Well-dressed businessmen stepped around the long line of activists stretched along Wacker Drive, as a few tourist buses passed and Chicago Mercantile Exchange traders watched the frenetic proceedings with calm bemusement from across the street.

"Don't take the bonuses," Hall-Wood said, addressing Goldman employees. "Give people the money to keep their home. It's about the rights of every American. We worked hard."

She was echoing protest organizers' (who include the National People's Action and major union coalitions, among many others of community organizations from around the country) call for Goldman Sachs to donate its entire projected 2009 bonus pool of $23 billion to "prevent every foreclosure in America in 2010."

While that demand likely won't be met, other demands being made by the "Showdown in Chicago" sponsors are making seem at least possible: modernizing the Community Reinvestment Act to regulate the companies responsible for most subprime loans that later soured, and creating a "Consumer Financial Protection Agency." (Protesters called on Goldman Sachs to publicly support such an agency today; organizers also want to break up big financial companies and "democratize" the Federal Reserve bank.)

While those goals have more to do with pushing Capitol Hill toward reform, Monday's action was all about venting anger at easy targets: The big banks that took billions in federal bail-out money and are now readying billions in bonuses for top employees.

But protesters know that the road to economic reform passes through Washington; some of their signs' messages—like "Save our jobs—Which side are you on?"—were directed at both bankers and politicians.

"We're here because the big banks are blocking legislation that will help people," said Michael Thompson, a Peoria, Ill. resident who traveled to Chicago Sunday for the week's "Showdown" events.

Soon after, a woman on a megaphone yelled "We're here to tell Goldman Sachs, shame on you! Shame on you for helping bring this country to the brink of a depression!" The crowd roared, and a few minutes later a representative from the fabled Wall Street firm came out of the high rise and accepted a letter addressed to Goldman CEO Lloyd Blankfein.

Whether Blankfein will read the message is unclear, but protesters cheered at the successful delivery.

They weren't so successful the previous day at the American Bankers Association conference about one mile away. (Sunday, Sen. Dick Durbin and others spoke at a "People's Commission" before 900 people marched to the ABA event at the Sheraton Chicago Hotel. See David Moberg's post earlier today, "Showdown Protests Envision New Economy")

But whatever the ultimate success of the Goldman Sachs protest (and the Wells Fargo protest that immediately followed it; see video below), it was clear Monday that protesters were relieved just to register their anger in public—and in front of cameras. There was anger, but there was also an almost festive catharsis in the air.

"We don't get an immediate response, but we often get responses later," said Rev. Rale Shotts, a 74-year-old Kansas City, Mo., resident who traveled to Chicago for the protests.

Watching the protest from  across the street, below the mercantile exchange, business consultant Jiten Behl said he supports tighter regulation of the financial industry, and believes Goldman Sachs should support a consumer protection agency. But the University of Chicago business school graduate sees little point in targeting the bonuses of specific companies.

"We need this smart regulation," Behl said. "[The banks] were part of the problem, so they have to be part of the solution. The entire financial industry has to do the same thing together."