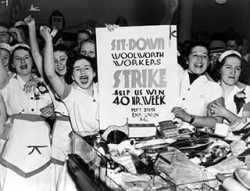 Exasperated organized labor stalwarts like to remind America that trade unionists are "the people who brought you the weekend"—or the 40-hour work week, or the minimum wage, or, well, Labor Day.

Trouble is, most people don't remember how crucial labor was in pushing Depression-era politicians to codify the basic features of American working life we now take for granted. Either they don't know any labor history buffs, or they never learned about workers' struggles in school.

That could soon change in Wisconsin, if Democratic Governor Jim Doyle signs a bill requiring the state's Superintendent of Public Instruction to include the history of organized labor and the collective bargaining process in state social studies standards. Teachers draw on those standards as they prepare students for standardized tests.

Doyle has said he will sign the law. The measure passed the Wisconsin Senate on October 27, supported by all Democrats and three Republicans; it had already passed the state's assembly.

While the law does not mandate that labor history be taught in schools, its presence in state standards means some schools will likely teach the subject, and that the state will provide assistance to schools that do.

Ken Germanson, president emeritus of the Wisconsin Labor History Society (WLHS) and a longtime advocate for the law, said: "Our sons and daughters deserve to know that the fruits of our labor were not handed down to us by those in power but rather won by the efforts of extraordinary people who sacrificed to produce a better life for all of us."

Wisconsin, along with other upper Midwestern states, has played a central, if not crucial role in American labor history. According to the Wisconsin State AFL-CIO President David Newby:

Wisconsin is a state of many labor “firsts”.  Some of those include: creating the first Workers Compensation program (1911) which established a no-fault system to guarantee that any injured worker would have their medical care paid for and receive some compensation for lost wages; passing the first regulated apprenticeship law (1911); and designing an Unemployment Insurance program (1932) that issued the first [unemployment] check in the entire nation.  We were one of the first states to pass family and medical leave rights (1988) before that legislation was enacted on the federal level.

Wisconsin workers also gave their lives while fighting for more humane working conditions.  In Milwaukee, several workers (along with a bystander and a child) were killed by the State Militia during a march in 1886 to limit the workday to eight hours, a demand which was considered radical at that time.  That right was not won until the 1930s.

In a letter rebutting an editorial in The Dunn County News, Newby noted how appropriate it is that schools may soon be teaching labor history: "Public schools exist because the labor movement championed Horace Mann’s call for free, universal education. Organized labor successfully challenged the elites who argued that access to education should be based only on wealth and intellect."

Of course, history lessons shouldn't be aimless tours down memory lane. Those who successfully pushed for the law, including WLHS President Steven Cupery, believe arming students with the knowledge of labor struggles will help them secure stable futures.

"The standard of living we have enjoyed for decades is being threatened," Cupery told the Wisconsin State Senate Committee on Education in July. "It is important that our youth are equipped with the lessons of history and economics that are embodied in the experiences of Wisconsin and American workers."

Of course, there's no guarantee that students will remember the labor history they learn in grade school. But if they do, maybe aging Wisconsin unionists won't have to keep reminding youngsters that organized labor is about as American as apple pie. Or, at least, the weekend.