The Hidden Cost of Storytelling: Journalists and PTSD 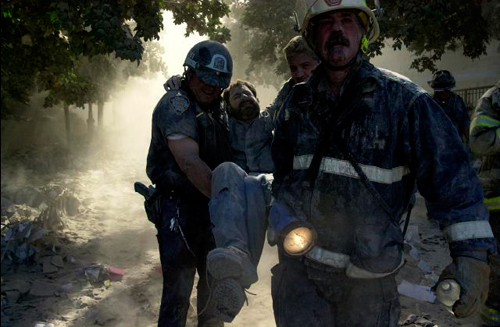 Breaking News Breaking Down, a film by journalist Mike Walter, explores how journalists are affected by reporting in danger zones like lower Manhattan on 9/11, pictured above.   (Photo courtesy BreakingNewsBreakingDown.com)

John McCusker was living his dream as a photojournalist covering his beloved and colorful hometown of New Orleans. Then came Hurricane Katrina, which put McCusker in the dual role of victim and journalist, one of the relatively few journalists who understood the city better than the hordes of reporters who soon flocked in from around the world.

He worked tirelessly throughout the storm, part of the team that later won the Pulitzer Prize for the New Orleans Times-Picayune. He lost his home, nearly all his belongings and his long-time neighbors, who scattered across the country. During the flooding and immediate aftermath he managed to keep the stress and trauma at bay enough to focus on his job, shooting photos seen around the world.

But as the anniversary of Katrina approached, he couldn’t hold it together any longer. Having struggled to access quality mental healthcare, one day he took two anti-anxiety pill...and woke up in the Orleans Parish prison in shackles.

Though he still can’t remember those lost hours, it turns out he got in his car, led police on a chase, pinned an officer with his car, injuring him, and then begged officers to shoot him. He faced up to two years in prison on felony charges. Eventually the charges were reduced to expunge-able misdemeanors as McCusker also slowly rebuilt his home and career at the paper.

McCusker’s is just one dramatic example of a little-known occupational hazard that is rarely addressed by media employers: PTSD and other emotional and mental trauma suffered by journalists.

During talks at the International Society for Traumatic Stress Studies in Atlanta this week, the occupational mental hazards of journalism is a focus of several talks by the Dart Center for Journalism and Trauma, a nonprofit organization anchored at Columbia University with programs also based in Seattle, Indonesia, Germany, London and Australia. (Disclosure: I am a 2009 Dart Ochberg fellow taking part in this conference.)

Journalists and mental health professionals argued that especially with two ongoing wars and budget cuts devastating the journalism business, media employers need to make it a priority to monitor and provide for the mental health of their employees—a break from the tradition of letting journalists self-medicate with alcohol "and continuing to pay them as they drink themselves to death," as one put it.

At a panel discussion Wednesday evening sponsored by the Atlanta Press Club, McCusker and other journalists described the toll job-related PTSD has taken on their lives. CNN and former Atlanta Journal Constitution reporter Moni Basu described the effects of a career including seven stints in Iraq and covering executions by electric chair in Florida.

“You’re watching a man take 18 minutes to die...and then you’re supposed to just go file your story and move on,” she said.

National TV reporter Mike Walter screened his recent film, Breaking News, Breaking Down, which features McCusker and other journalists suffering psychological effects from the job, compounded in many cases by a culture that discourages any sign of emotion or “weakness.”

The Australian Broadcasting Corporation offers trainings and peer support networks for its employees on how to deal with mental trauma and PTSD from covering wars, bush fires and other stressful assignments. Cait McMahon, managing director of the Dart Centre Australasia in Melbourne, advocates all news organizations make use of the center’s free one-hour video or otherwise offer institutional and peer support for reporters.

CNN cameraman Mark Biello was suffering nightmares and other signs of PTSD, that boiled over in a road rage incident where he accosted a cab driver.

“Every time you see things your cup gets fuller, and there’s only so long before it overflows,” he said.

Reporters say it is harder than ever to persuade employers to make resources or even time available to address job-related mental health. But the need is greater than ever, as staff-cutting and belt-tightening often means heavier workloads that only add to stress. The issue is even harder to address for freelancers, who often don’t have health insurance or one steady employer.

“You think you’re tough and jaded,” said McCusker. “But it doesn’t matter, you can be muy macho and this can still bring you to your knees.”

He said photographers especially suffer not only from the things they witness, but also often the resentment of the public.

”People like to call us papparazi and blood-sucking vultures, thinking we take joy in these images,” he said. But in reality in violent or tragic situations, “That camera is like lifting a Buick to your face.”