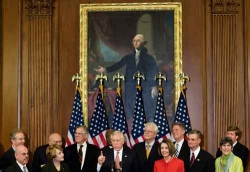 Speaker of the House Nancy Pelosi (D-Calif.) and other House Democrats gather for a press conference after the House of Representatives passed the healthcare reform bill 220 to 215 late Saturday night.   (Photo by Brendan Smialowski/Getty Images)

Union leaders joined President Obama in hailing the historic, if narrow, passage of major health reform legislation in the House this weekend.

The bill "is a fiscally responsible bill that will cover 96 percent of Americans, end insurance company discrimination and denials of care and equip health care providers with the tools they need to lower costs for families and the country as a whole,"  AFL-CIO President Richard Trumka said. "The bill...does not attempt to finance reform on the backs of the working middle class... But we still have a long way to go."

Indeed, as this blog and other observers point out, the real sticking point in the Senate probably won't be the public option or even the extreme anti-abortion language passed in the House, but the critical issue of how to pay for the legislation. Will it be by taxing the rich, as the House does, or burdening the middle-class with new taxes and costs? That's what union advocates and the Congerssional Joint Committee on Taxation say will happen as a result of the Senate's tax on insurers that offer high-cost plans.

The conventional wisdom in Washington is, as the AP put it Sunday, that the "millionaire's tax is a non-starter" in the Senate, but grassroots activism by unions, public opinion and the strong backing of the AARP and AMA for the House version all add political clout to the drive to keep the House payment approach alive.

Over at the Daily Beast, Matt Yglesias points out the hurdles to reconciling two starkly different versions of paying for the legislation:

The merits of the two approaches aside, the work of a political compromise will be extremely difficult. The House’s approach seems to have almost no support in the Senate, and wasn’t even seriously considered by members of the Senate Finance Committee. Conversely, the Senate’s approach is opposed by labor unions, and over 150 House Democrats have signed a letter saying they also oppose it. The party leadership, simply put, has very little margin for error when it comes to trying to sort this issue out. A handful of defections from the 219 Democrats who voted in favor of reform last night could probably be made up, but not much more than a handful. And in the Senate, it essentially required Democratic unanimity to pass bills in the face of routine filibustering and solid GOP opposition.

There hasn’t been much rancor around this issue, simply because it hasn’t been in the public view. But it will be soon. How can health-care reform pass if it’s financed by a mechanism that key moderate senators have dubbed a “non-starter?” Alternatively, how can you imagine a universal health-care bill passing with no Republican support over the opposition of the AFL-CIO? Comprehensive health-care reform is closer than ever to happening, but it’s still far from obvious that it will happen.

On top of that important issue, the five-vote majority was pulled together in part by securing the votes of some of the 64 ConservaDems in support of an amendment barring any tax dollars even indirectly subsidizing abortion. It's  the biggest rollback of a woman's right to choose in decades, and one that could hit low-income women the hardest.

It's a poison pill that Democrats in individual, GOP-leaning districts had to swallow, but not one that most Democratic Senators can easily accept if they want to avoid primary challenges or low turnout from disaffected Democratic voters in state-wide races. The assumption in Washington is that somehow the hard-line stance in the House bill will be finessed in the Senate, and either defanged or removed in conference.

But some journalists and bloggers say, the hard-line abortion amendment could have been significantly weakened, at least, if pro-choice groups had lobbied harder and more effectively—and if House leadership had taken more seriously  the concerns of pro-life Democrats and the U.S. Conference of Catholic Bishops as a roadblock to reform.

Now millions of low-income women who might seek to buy insurance with a taxpayer subsidy could find themselves denied the right to access medical care and  legally terminate a pregnancy. Pro-life forces were justifiably cheering at this news. But it's clearly at odds with the spirit and intent of health reform, let alone  the Democratic Party platform.

Equally troubling to reform advocates is the slow-down in the Senate and the ominous signals that Sen. Reid sent last week hinting that a final vote in the Senate might not take place until early next year. The Senate bill has been in a form of limbo over the last two weeks; activists believe this impasse needs to be challenged with more grass-roots pressure.

Nor surprisingly, the inside-the-Beltway mentality that declared the public option dead a month ago is still contending that you need 60 votes to pass a bill with a public option. In fact, progressive strategists say, you just need 60 votes to stop a filibuster, and 51 votes using budget reconciliation to pass a bill if cloture can't be reached. Here's how the center-right AP's news analysis frames the issue:

If a government plan is part of the deal, "as a matter of conscience, I will not allow this bill to come to a final vote," said Sen. Joe Lieberman, the Connecticut independent whose vote Democrats need to overcome GOP filibusters.

"The House bill is dead on arrival in the Senate," Sen. Lindsey Graham, R-S.C., said dismissively.

Democrats did not line up to challenge him. Senate Majority Leader Harry Reid, D-Nev., has yet to schedule floor debate and hinted last week that senators may not be able to finish health care this year.

Nonetheless, the House vote provided an important lesson in how to succeed with less-than-perfect party unity, and one that Senate Democrats may be able to adapt. House Democrats overcame their own divisions and broke an impasse that threatened the bill after liberals grudgingly accepted tougher restrictions on abortion funding, as abortion opponents demanded.

The lesson drawn from the House action by the AP's analyst is: do what's needed to compromise with your party's right wing. On the Senate side, that would mean abandoning the public option in practice, and perhaps keeping it in name only with a "trigger" provision that could take years to put in place as 45,000 people die annually because of a lack of health insurance.

SEIU President Andy Stern drew a different lesson from the House victory, as a statement from the union said:

"Real leadership does not govern out of fear but looks at the obstacles facing our country and pushes for bold solutions that live up to our country’s promise. Like the creation of Medicare and Social Security, today’s historic passage of the Affordable Health Choices Act by the House of Representatives will be remembered as a pinnacle moment when Congress showed the courage necessary to live up to our American ideals,” Stern said.

SEIU’s members have been on the front lines for more than a decade in the fight to reach this historic moment. Its two point one million members – nurses, doctors, janitors, nursing home workers, child care providers – spent these years knocking on doors, making tens of thousands of phone calls, and donating their time and money to make sure Congress delivered meaningful reform.

Stern continued, “The Affordable Health Choices Act guarantees quality health insurance is affordable and that the insurance industry can no longer stand in the way of people getting the care they need at a price they can afford...

“We heard enough of ‘No We Can’t’ from the insurance industry, special interests and Republicans today and we will not let them stand in the way of a healthcare system that Americans have fought for nearly a century to realize.”

Stern emphasized that it is "now up to the Senate to lead with the same audacity to guarantee that meaningful health insurance reform does in fact happen this year.”