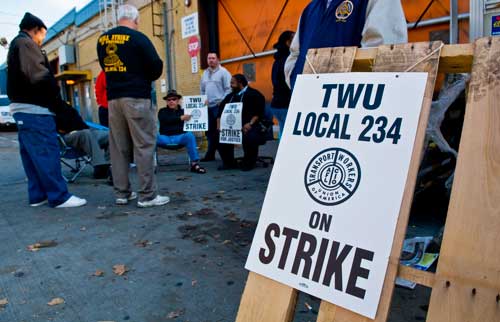 SEPTA workers on strike at the Frankford Transportation Center on November 3 in Philadelphia.   (Photo by Jeff Fusco/Getty Images)

PHILADELPHIA, PA.—Trains, buses and trolleys are moving again here after transit workers ended a six-day strike late Sunday. Members of the Transit Workers Union (TWU) Local 234 are expected to ratify an agreement in the coming week, ending a dispute that had centered on pension issues.

The union demanded that the Southeastern Pennsylvania Transportation Authority (SEPTA) pay more money into the underfunded pension, but as of Monday morning it was unclear what pension concessions the union succeeded in winning from management.

Under the new contract, workers will increase their contribution to the pension fund to 3 percent of their salaries from the current two percent, and maximum pensions will be increased by $3,000, to $30,000 a year. The five-year contract also stipulates a 2.5-percent raise in the second year, and a 3-percent raise each year thereafter.

Media coverage of the strike has been marked by hostility to strikers—and a scarcity of reliable information.

On Friday night, it was widely reported that a deal would be reached within hours. When the deal fell apart, SEPTA management, Mayor Michael Nutter and Governor Ed Rendell accused the union of backing out of an agreement.

The union, however, contends that they had only agreed to a general framework with the governor and were surprised on Saturday morning when SEPTA delivered a contract containing a number of separate provisions.

"The governor was correct,” Local 234 spokesman Jamie Horowitz told the Philadelphia Inquirer. “There was essentially a handshake agreement on some of the big issues related to salary and pension funding. But the devil is in the details. And when the contract was sent over [Saturday], it included a couple things that were difficult for the union.”

Local 234 rejected SEPTA’s demand that the union agree to re-open healthcare provisions of the contract if the pending healthcare overhaul in Congress raised costs. Local 234 also demanded a forensic audit of the workers’ chronically underfunded pension fund. For reasons that are unclear, SEPTA resisted the audit even though the union offered to pay for it. It appears that no audit was included in the final contract, but the union is expected to continue pushing for an investigation.

Another mysterious aspect of the deal is a three-year dental plan that has been widely reported as one of the centerpieces of today’s agreement. No dental issues were previously reported as a point of contention and it is still unclear what role it played in the dispute.

Mike Zappone, who works at SEPTA's 69th St Terminal, says that there is widespread concern among union members that their pension money has been misappropriated and calls the dental issue a diversion. “On the news they’re talking about a dental plan? We haven’t heard about dental the whole time.”

In Pennsylvania, a state known for rampant corruption, there is abundant suspicion of malfeasance on the part of both Democrats and Republicans.

Pension funds for public sector workers are in crisis across the country, due to the financial crisis on Wall Street and years of management pushback against defined-benefit packages. 401(k)s increasingly dominate the private sector, and public employees are fighting to maintain a secure retirement.

In Philadelphia, pensions are also the sticking point in stalled negotiations with public-sector workers.

The dominant narrative in the media, however, has framed SEPTA workers as a labor aristocracy insensitive to the recessionary troubles of other working-class Philadelphians. The Media Mobilizing Project, a media activist group that works with labor and community organizations throughout the city, put together a video highlighting the media bias.

Ronnie Polaneczky wrote one particularly incendiary column for The Philadelphia Daily News entitled “SEPTA strikers, how dare you!” She argued that public sector workers should not demand better conditions while those of other workers were deteriorating:

Unemployment is rampant in this region, and your union actually chose to strike rather than continue hammering out the details of your already excellent jobs? Jobs that we, the transit-dependent public, need you to perform so that our own financially teetering lives don't crash and burn?

The union argues that the raises keep wages on pace with inflation and will be partially offset by increased contributions to the pension plan.

Chris Satullo, news director at Philadelphia public radio station WHYY, also jumped into the fray. Noting that he grew up in a union household, he charged that public employee strikes undermine public support for unions—but neglected to suggest how else such a union could defend members’ rights.

Zappone says that the media consistently took management’s side in the dispute. “They backed the politicians,” he said. Zappone says that workers had no choice but to strike. Yet reporting on the strike’s impact overshadowed discussion of worker issues.

“How long are we supposed to work without a contract?” he asked. “SEPTA just ignored us.” (The Media Mobilizing Project has also put together a video highlighting worker voices.)

Negotiations between SEPTA and Local 234 have often led to conflict. SEPTA workers struck for seven days in 2005 over healthcare issues and 40 days in 1998 over management attempts to convert positions to part-time, change work rules and increase outsourcing. “I’ve been working 36 years for SEPTA,” Zappone says. “Every time we go for a contract, it’s a battle. They always want to take something from us.”

U.S. Rep. Bob Brady played a lead role in negotiating a settlement--especially, it seems, given the personal animosity between Mayor Nutter and the union leadership. Mayor Michael Nutter was kicked out of the negotiations on the strike’s second day. Local 234 accused Nutter of intransigence at the bargaining table.

According to Horowitz, Nutter was worried that a successful outcome for Local 234 would bolster the bargaining position of the four municipal unions that have been working without a contract since June 30.

Public employees are often the target of derision in Philadelphia media. But in a de-industrialized city like Philly, once the “workshop of the world,” public sector jobs are one of the few opportunities left for a poor person to make a decent living.

The union, however, has been roundly criticized for failing to reach out to transit users, and even Local 234 President Willie Brown concedes that the strike was poorly timed. But a Sunday demonstration called to protest the strike fizzled. According to The Inquirer, one protester showed up, greatly outnumbered by an overeager press corps.

Workers say that management is out of touch with the working-class public. “They don’t care about the people,” says Zappone. “A lot of these managers wouldn’t know an El from a trolley.”

Brown has called his decision to call the strike—at 3 a.m. on November 3, just after the World Series moved back to Yankee Stadium in New York—the way he did a mistake. Zappone agrees, saying, “We messed up the first day.” The misstep gave SEPTA an initial advantage in directing public anger against the union.

“[Brown] has publicly said that it was a mistake to go out at 3 a.m. without giving public advance notice,” says Horowitz. “And frankly, we probably could have put a lot of pressure on the employer if we said, ‘Hey, the clocks ticking. The train won’t run if there’s not movement on these issues.’”

But he says that the union recovered their footing. “The primary issue is pensions. And I think we did succeed in getting that across to the public.”