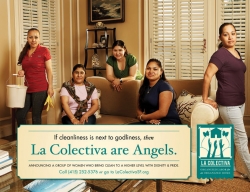 The campaign, the theme of which is "Communicating Strength and Hope" ("Comunicando poder y esperanza"), aims to alter the perception of often undervalued domestic workers to one of respect, dignity and economic importance.

Campaign ads, which will run for one month, focus on the benefits of green cleaning and a call to action for employers to use non-toxic products that protect the workers and the families where they work.

La Colectiva, a worker-run collective, is a San Francisco/Bay Area-based membership organization of Latina immigrants that is part of La Raza Centro Legal. It works to achieve economic and social justice regardless of their immigration status.   The group has spent the past year working with the Labor Occupational Health Program (LOHP) at UC Berkeley and Underground Advertising to build the ad campaign.

It's part of New Routes to Community Health, which is supporting eight projects across the nation through a grant from the Robert Wood Johnson Foundation. New Route's focus is health immigrant integration through the use of media.

New Routes partners "immigrant groups, media makers and community organizations to define their own problems and use media to create solutions," explains Catherine Stifter of New Routes. The push for non-toxic products is a result of women reporting health problems related to toxic cleaning products, says Suzanne Teran, of LOHP. LOHP is one of the partners in the media campaign and worked closely with the workers.

"We know many of the cleaning products can also be harmful to the families if they have children. So we are promoting the training and knowledge that these domestic workers have to clean in a safe way, not only for themselves but for others," Teran says.

As part of the campaign, the group has collaborated with the San Francisco Department of Health to train members to protect themselves and members of the household where they are working by using safe, non-toxic products.

It includes an employer handbook, downloadable from this website, which offers a guide to green cleaning products and the department's safe home cleaning methods fact sheet.  The campaign targets female domestic workers in the community to become part of La Colectiva, and also focuses on attracting potential employers.

"I can't think of anybody I would trust more to take care of my elderly parents then the women I've had working for them for over five years who are members of the Colectiva," says employer Nicky Trevino.

"The doctors come to visit my parents and they remark 'who is taking care of your parents? They are under such good care.'"

La Colectiva has been a source of empowerment to domestic worker Maria Fernandez. When she first arrived in the U.S., she was hired as a domestic and not allowed to leave the house for one year.

She worked seven days a week: "It was the same every day," Fernandez recalls. "One day I escaped."   She ultimately made her way to La Colectiva:

I learned that it doesn't matter if you have papers or not, every worker has the right to get paid. We see many women who come to us who are being abused in the homes they work in. We see many who aren't paid. We want them to know there's an organization that can help them.

The photos for the ad campaign were taken by noted photographer Joseph Cultice, who was the assistant to famed photographer Annie Lebowitz. Postcards and posters from the campaign will continue to be distributed for the next three months.   This website contains materials that any group of Latina immigrants can use to launch a similar campaign in their area.

The campaign is being launched as hundreds of domestic workers prepare to gather this weekend (Nov. 13-15) from across the nation to attend the National Domestic Worker Alliance Regional Congress, which takes place in San Francisco and Oakland.

The Alliance is made up of domestic worker organizations from 15 cities across the nation.  This follows the recent victory of Vilma Serralta, a household worker in the Bay Area who recently won a lawsuit against her abusive employers, in whose home she worked 14-hour days with no overtime or breaks and plenty of verbal abuse.

Participants at the conference hope to build momentum to pass laws safeguards preventing these kinds of abuses. They will develop a national agenda for domestic worker rights and press for reforms.   They are expected to throw support behind a legislative campaign to build a California Domestic Worker Bill of Rights.

"Domestic work often doesn't have the protection of labor laws," says LOHP's Teran. "The workers are excluded from many of the CalOSHA standards."

"We want to send a strong message that every worker has rights and [shouldn't] be ashamed of their work," Fernandez says. "More women are going to come to this country, and we want them to know that there is a place for them to go where they are cared for."