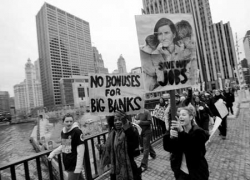 Protesters at the "Showdown in Chicago" protest near the American Bankers Association annual conference, on October 27, 2009.   (Photo by Peter Holderness.)

SEIU President Andy Stern is joining hundreds of progressives—maybe more—in a newly organized protest outside the Washington, D.C., offices of Goldman Sachs on Monday at noon. SEIU is part of a co-sponsoring coalition, Americans For Financial Reform, that also includes the AFL-CIO and the advocacy groups Public Citizen and National People's Action.

President Andy Stern and hundreds of taxpayers will converge on the Washington headquarters of Goldman Sachs to demand an end to multi-billion dollar bonuses and the Too Big To Fail Doctrine and call for immediate Congressional action on real financial reform. This is the latest in a national mobilization launched last month as 5,000 taxpayers from 20 states converged on the American Bankers Association convention in Chicago to demand Wall Street and big banks stop fighting reforms that will protect our families from the next crisis

There is hardball politics at play on both sides, as Politico reported:

Goldman Sachs CEO Lloyd Blankfein may have had his tongue in his cheek when he said his bankers were doing "God's work," but the company's critics aren't laughing.

In fact, a couple hundred of them -- led by Service Unions International Union president Andy Stern -- plan to gather outside of Goldman Sachs' Washington offices Monday morning to protest the firm's mega-bonuses, and demand the end of the "too big to fail" doctrine, according to a press release...

Among their demands, the protesters will say that Goldman bankers should donate their reported $23 billion in bonuses to foreclosure prevention programs.

Public Citizen will release a new report during the event analyzing how much the various bailout recipient like Goldman are spending lobbying on financial reform, which the groups say is aimed at squashing real reform...

But Goldman and other Wall Street firms are very opposed to a new idea gaining traction on the "too big" front -- legislation that would empower the federal government to preemptively break up big, complex or interconnected firms even if they're healthy...

Blankfein's defense of the investment firm and new resistance to proposals to break up oversized firms stand in sharp contrast to the firm's track record. It helped spur virtually all major crashes since the Great Depression through the manipulation of markets and its latest role was selling to investors nearly-worthless mortgage-backed securities while secretly betting that the housing market would crash, according to McClatchy newspapers.

As I previously observed recently in The Huffington Post:

Blankfein's latest comment comes in the wake of a startling claim by another Goldman Sachs International adviser, Bryan Griffiths: "We have to tolerate the inequality as a way to achieve greater prosperity and opportunity for all." As Think Progress pointed out about this assertion:

The Wall Street Journal reported that Wall Street banks are on pace to pay out a record $140 billion in compensation this year. "Workers at 23 top investment banks, hedge funds, asset managers and stock and commodities exchanges can expect to earn even more than they did the peak year of 2007," the Journal found.

The New York-based investment bank Goldman Sachs has "set aside $16.7 billion for compensation and benefits in the first nine months of 2009," which is a 46 percent increase from last year. But according to a Goldman adviser, Wall Street's record pay is necessary "to achieve greater prosperity and opportunity for all."

The real truth about Goldman Sachs has been exposed, in part, in a briefing paper compiled by SEIU:

* Goldman Sachs had a hand in the worst of the subprime lending excesses, providing financing to three of the five largest subprime lenders: #3 New Century Financial Corp., #4 First Franklin, and #5 Long Beach Mortgage Co. This financing provided the companies with the capital they needed to originate subprime mortgages. Together, these firms issued more than $200 billion in subprime loans from 2005-2007.

* Goldman Sachs played a major role in underwriting and selling the exotic financial instruments like credit default obligations or CDOs that fueled the subprime machine through mortgage backed securities. Just before the housing bust, Goldman was ranked third by Bloomberg in the underwriting and sale of CDOs, earning $239 million. The CDO market was further fueled by other exotic financial instruments called credit default swaps, a form of insurance against possible mortgage defaults. Here again Goldman was a major player, getting bailed out on its bad bets when the government saved AIG from tanking.

* When the housing bubble burst, Goldman was hit with a series of lawsuits, including one by New York state regulators; after being subject to another investigation in Massachusetts for misrepresenting the quality of their mortgage backed securities, Goldman eventually agreed to pay a $60 million settlement.

That would bad enough. But as SEIU and other advocates report, Goldman Sachs executives wasted and misused the money we've given the firm after it helped wreck the economy and throw millions out of work. As SEIU's briefing paper points out:

Profiteering off the bailout and gambling with taxpayers' money:

* Goldman Sachs put taxpayers on the hook for up to $63.6 billion in bailout funds and programs plus an unknown amount from the Federal Reserve's $8 trillion in emergency programs. While Goldman has since repaid its $10 billion in TARP money, allowing it to avoid government oversight on executive compensation, it doesn't have to repay the $12.9 billion received through the AIG bailout, which is even larger than the $10 billion it repaid...

* Goldman's bailout money has gone little to help struggling homeowners. Goldman's loan servicing operation, Litton Loan Servicing LP, has started trial mortgage modifications for only 3% of its 103,871 borrowers who are eligible for the Obama Administration's Making Home Affordable Program (and are at least 60 days past due)...

* Moreover, Goldman is back in the mortgage securitization business, repackaging the mortgages that have been stuck on their books since the housing bubble burst and now selling them as a new product. Known as "re-remics", they simply pull out the worst of the bonds to boost the credit rating to make the sale, kind of like what brought on the financial crisis in the first place.

It's little wonder that Public Citizen, when announcing the protest last week, framed the issues in a dramatic way. It's populist rage that's seemingly well-justified:

Goldman Sachs and the other banksters are back to making record profits and on track to hand out multi-billion dollar bonuses. Meanwhile, back in the real economy, unemployment has risen above 10 percent, millions have lost their homes and the banks keep nickel and diming us.

Enough is enough - it's time to take our demands for more accountability to the streets.

Join with Public Citizen's president, Robert Weissman, and hundreds of other fed up consumers and activists in a protest in front of the Goldman Sachs offices on Capitol Hill this Monday, Nov. 16! Let's demand an end to billions in bonuses!

What: Protest the banksters in front of Goldman Sachs and rally at the Capitol.

Too big to fail is too big to exist. It's time to break up the banks and put a watchdog to work for everyday Americans.