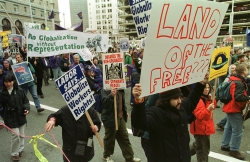 Ten years ago, U.S. labor—led by the Steelworkers and West Coast Longshoremen—and a vast alliance of students, environmentalists, faith groups, farmers and NGOs from around the globe rocked the world with massive protests in Seattle at the first meeting of the World Trade Organization, forcing the founding conference of "the masters of the universe" to shorten their event.

For the AFL-CIO, then led by John Sweeney, involvement in the Seattle protest was a remarkably bold departure from the past, a step reportedly not taken eagerly, according to long-time labor activist, author and academic Stanley Aronowitz writing in The Battle of Seattle: The New Challenge to Capitalist Globalization.

Still, labor took to the streets in massive numbers (estimates of the labor contingent were in the tens of thousands) against a central pillar of the Democratic Clinton administration: a corporatist form of globalization that minimizes labor rights, environmental sustainability, food security and democracy.

Media coverage of the Seattle protests often focused on the supposedly bizarre coalition of "Teamsters and turtles"—referring to the blend of burly, crew-cut unionists with long-haired environmentalists concerned about rapacious fishing practices—and tended to ignore the fundamental challenge to corporate power being expanded at a global level.

Media also focused the widespread instances of window-breaking and other vandalism by "black bloc" anarchists. Did the trashing of windows by the black bloc possibly divert media from devoting attention to the many articulate anti-WTO voices of leaders with mass followings?

Maybe non-violent blockading of streets by labor and other protesters might have been sufficient to command the attention of corporate news media that have reliably and almost unanimously supported the central elements of corporate globalization. But given the mainstream media's marginalization of labor and other critics of corporate-driven globalization, non-violent protests might have been insufficient to command attention.

But violence tends to drive away many likely participants and supply public officials with a pretext for confining protesters to remote "protest zones," invisible to globalization officials, the media—and thus the public.

Regardless, protesters' initial successes in obstructing the WTO conference  triggered a wave of mass arrests and brutality that has proven to be mild relative to the repression that that has been visited upon "anti-globalization" protesters in cities like Genoa, Miami, Pittsburgh, and elsewhere around the planet. The events of 9/11 further infused police and federal officials with a heightened sense of their power to trample on basic liberties with impunity, further fostered by the mainstream media’s indifference to such tactics.

To the extent that leading media commentators analyzed the Seattle protests, they outrageously caricatured the protesters as conducting themselves like "bad Samaritans," pretending to care about the plight of the poor of the Third World while secretly pursuing a "protectionist" or even darker agenda. For example, in terms of pure viciousness, it is hard to top Newsweek's linking the photos of renowned non-violent social critic and author Noam Chomsky with Unabomber Ted Kaczynski in a sidebar.

Those who demonstrated at the “battle of Seattle” in 1999, said Fareed Zakaria—the influential editor of Newsweek International and author of The Post-American World—were displaying the hubris of the “rich and privileged”  by challenging the WTO’s promotion of sweatshops and environmental degradation in the impoverished Third World.

In other words, Zakaria denounced the arrogance of those who presume to advocate for the world’s poor. While protesters claim to stand up to concentrated corporate power, Zakaria charged “the anti-globalization crowd is anti-democratic . . . trying to achieve, through intimidation and scare tactics, what it has not been able to get through legislation.”

But the allegation of “intimidation and scare tactics” is much more fittingly directed against transnational corporations, which routinely threaten to shift jobs and investment from one nation to another unless more favorable tax and environmental laws are enacted and wages are reduced.

Furthermore, the main elements of the anti-corporate protesters’ global agenda are actually profoundly democratic, both in terms of their goal—greater popular accountability over the shaping of the global economy—and in their popular support, with the activists’ positions backed by vast majorities in poor nations such as Mexico, China and India, as well as in the U.S. (A multinational Chicago Council/ WorldPublicOpinion.org poll released in April 2007 found majorities in most poor nations insist that globalization must be accompanied by global standards to prevent a “race to the bottom.”)

Since Seattle, however, even in the midst of the most severe recession in eight decades, the labor movement has been largely unwilling to unleash the same kind of boldness it displayed a decade ago. Labor has generally failed to capitalize on the massive public opposition to the off-shoring of jobs and other elements of the corporate globalization program.

With American communities being devastated by a non-stop torrent of both manufacturing and professional job relocations from the U.S. to Mexico, China, and India, the labor movement is faced with potent "teachable moments." While workers often lack the unique leverage utilized in the Republic Doors and Windows occupation in Chicago last December, every threatened relocation could be used to build a broadly-based community movement to prevent the closing and insisting on a program of decent jobs and wages across the globe.

Clearly, the steam built up behind investor-rights globalization—as embodied in NAFTA and the WTO—is enormous, and this speeding locomotive will not be easily slowed down by worker-community protests alone. But labor cannot wait for the Obama Administration to act. Labor needs to "think globally and act locally"—before our productive base is entirely hollowed out and union membership declines even further.