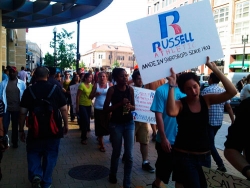 Honduras hasn't exactly been full of good news since June, when President Mel Zelaya was ousted from power and ushered abroad, throwing the country into political chaos.

But a huge victory was scored yesterday for 1,200 workers in the country who were fired by Russell Athletics early this year after unionizing. The apparel company, which has fought off unions for years, shut down the factory.

But soon the workers will be back to work at a new plant. Better yet, Russell has pledged not to fight the organizing efforts of employees at its seven existing factories in Honduras—a major victory for the U.S. anti-sweatshop student movement, which has been fiercely and creatively pressuring Russell to reverse its anti-union stance since the factory closed in January.

... [United Students Against Sweatshops] orchestrated a nationwide campaign against the company. Most important, the coalition, United Students Against Sweatshops, persuaded the administrations of Boston College, Columbia, Harvard, New York University, Stanford, Michigan, North Carolina and 89 other colleges and universities to sever or suspend their licensing agreements with Russell. The agreements — some yielding more than $1 million in sales — allowed Russell to put university logos on T-shirts, sweatshirts and fleeces.

Calling Russell's decision "landmark," United Students Against Sweatshops (USAS) said in a statement today that "[t]his...is one of the most significant campaign victories of the global justice movement. No one has ever forced a multinational corporation to reopen a facility it shut down in the global race to the bottom."

Russell's decision to rehire the workers and make peace with unionists can be seen as the result of a decade of steady movement-building and coalition-building by student activists across the country. They pressured Russell's bottom line by convincing university administration's to adopt "codes of conduct" for the factory used by apparel companies.

And they went farther, as the Times reports, persuading school officials to create in 2000 the independent monitoring group Worker Rights Consortium, which inspects factories to enforce the labor codes. 170 universities are members of the organization, which wrote a report accusing Russell of violating workers' rights.

“This is a landmark event in the history of workers’ rights and the codes of conduct that we expect our licensees to follow,” said Mike Powers, a Cornell official who sits on the consortium, the Times reported. “My hat is off to Russell.”

Although it's unclear why the company conceded to activists' and workers' demands when it did—about ten months after USAS began its campaign—students' efforts were clearly behind the decision. College apparel is a significant market for Russell's products, and schools that had cut ties with the company may now sign licensing agreements.

Although claiming the victory as their own, USAS were mindful that it was the result of more than just this year's efforts, which included knocking on Warren Buffet's door in Omaha. (Buffet's company Berkshire Hathaway, owns Fruit of the loom, which in turn owns Russell Athletics.)

"We built on top of USAS victories of the past twelve years, from the sit-ins in the late 1990s that resulted in supply chain transparency and university labor codes of conduct to the formation of the Worker Rights Consortium," the organization said, adding:

We can successfully fight back when those in power take advantage of the economic crisis to attack working people. We should take strength and inspiration from the example of the workers of Jerzees de Honduras. We can fight back — and WIN — against policies that benefit a privileged few and hurt our communities.

This week's victory deserves to be savored and celebrated. But if schools that stopped working with Russell reward the company with new contracts (while continuing to monitor its operations) it could push other apparel companies to follow suit, potentially improving the lives of thousands of workers in factories around the world.

That would be a real landmark for workers' rights in an industry synonymous for too long with the word "sweatshop."