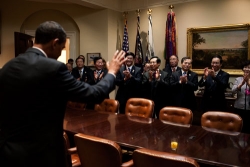 "We cannot go back," President Barack Obama said in September, "to an era where the Chinese...just are selling everything to us, we're taking out a bunch of credit-card debt or home equity loans, but we're not selling anything to them."

If only that were true.

Unfortunately, there seems to be insufficient political will to radically restructure our relationship with China, given the clout that China has gained by purchasing U.S. dollars and charming U.S. corporations. The stage for our current relationship was the passage of the Permanent Normalization of Trade with China, passed in 2000.

It probably represents the most shameful short-ciruciting of democracy via legal pay-offs in our lifetime, and its effects continue to be felt during the current "jobless recovery."

Nearly four out of five Americans—79% of Americans, according to a 2000 poll—were opposed to normalizing trade relations with China. The country's notorious policies of repression, brutally-imposed low wages, and dictatorship had persuaded an overwhelming majority of Americans that expanded, essentially unregulated trade with China would be inhumane and foster a massive loss of jobs.

But as with the current healthcare debate, the massive infusion of corporate dollars swayed enough Democratic votes to make passage of PNTR possible: Part of the pay-off was imemdiate: the very night the PNTR passed in the House, Democrats held a record-shattering $26.5 million fundraiser.

Ka-ching! Ka-ching! Insert huge campaign contributions, and corporate America gets an enormous policy payback. It gained access to the Chinese labor market, where wages run about 3% of those in U.S. manufacturing, according to Jeff Faux in The Global Class War, without the pesky annual review of the state of worker and other human rights.

The Business Roundtable spearheaded a $10 million corporate effort on what was then their biggest media campaign every waged on any issue. The corporate and media elites essentially all had the same message: expanded trade with China would result "naturally" in a faster evolution to democracy,  enhanced U.S. access to the huge Chinese market of 1.2 billion people would mean more U.S. exports and jobs, and a reduction in the U.S. trade deficit.

But the Roundtable's media campaign was far more influential with congresspeople than with the public, who remained convinced that expanded trade with China would allow unscrutinized repression in China and accelerate the export of jobs to China.

Despite ongoing popular opposition. Bill Clinton wound up signing the PNTR into law in October, 2000.

That step certainly intensified the difficulties Al Gore would face at the polls  less than a month later, when Gore—already established as a ferocious advocate of the previous main job-destroying act of Congress, the North American Free Trade Agreement—had to persuade the public that he really cared about the jobs and wages of ordinary working families.

Meanwhile, none of the prophesies of the PNTR advocates have been borne out:

INCREASED U.S. JOBS: Carly Fiorina, then chief executive of Hewlett-Packard, warned, "A vote against trade with China is a vote against U.S. business, employees, citizens and the people of China."

According to Robert Scott of the Economic Policy Institute:

Contrary to the predictions of its supporters, China's entry into the World Trade Organization (WTO) has failed to reduce its trade surplus with the United States or increase overall U.S. employment. The rise in the U.S. trade deficit with China between 1997 and 2006 has displaced production that could have supported 2,166,000 U.S. jobs. Most of these jobs (1.8 million) have been lost since China entered the WTO in 2001.

BOOMING CHINESE MARKET?: This claim was a fraud from the start.  Contradicting those who hailed China as a huge potential market for U.S.-made goods, the Wall St. Journal in May 2000 suggested that China's real significance lay in U.S.-owned factories churning out goods for export back to the U.S.

Chinese consumers are taking home a shrinking proportion of the total economy. Last year, personal consumption in China amounted to only 35% of the Chinese economy; 10 years ago consumption was almost 50%. Capital investment, by contrast, rose to 44% from 35% over the decade.

China's capital spending is on the way to exceeding that of the U.S., but its consumer spending is barely a sixth as large. Chinese companies are plowing their rising profits back into more productive capacity--additional factories, more equipment, new technologies."

Reich goes on to note how US-based corporations are deepening their investments in China, doing exactly what could revive the U.S. economy if they invested here:

GM recently announced it was planning to make a new subcompact in China designed and developed primarily by the Pan-Asia Technical Automotive Center, a joint venture between GM and SAIC Motor in Shanghai. General Electric is producing wind turbine components in China. Earlier this month, Massachusetts-based Evergreen Solar announced it will be moving its solar panel production to China.

Currently, some 60% of the Chinese-made goods—which range from clothing to the most sophisticated electronics and aerospace parts—flowing into the U.S. are made by foreign-owned firms, mostly U.S. The number one U.S. export headed for China out of the giant port at Long Beach Calif.: waste paper and cardboard to be recycled into packaging made for Chinese-produced goods to be shipped back to the U.S.

TRADE DEFICIT: Since China was granted PNTR status, the U.S. trade deficit with China has ballooned to as high as $268 billion. Of course, with diminished spending power, U.S. consumers are buying less and the deficit is slowing—but only as a reflection of this reduced demand. "Looking forward, we can expect to see both China’s trade surplus and America’s trade deficit surge, " warns noted economist Paul Kurgman.

REPRESSION:  While China has kept any Tiananmen Square-sized demonstrations from breaking out, it has continued to suppress independent unionism with firings and arrests. Moreover, it has used its-U.S. assisted technological prowess to convert China into the society with the heaviest surveillance via closed-circuit video cameras and Internet monitoring designed to quash dissent, as Naomi Klein recounted just before the generally positive gush of publicity about the 2008 Beijing Olympics.

China's rulers, faced with a surge of sponataneous strikes, attempted to co-opt the worker discontent by enacting a new set of labor rights. However, this was not well received by U.S. corporations, as the New York Times reported:

China is planning to adopt a new law that seeks to crack down on sweatshops and protect workers’ rights by giving labor unions real power for the first time since it introduced market forces in the 1980’s.

The move, which underscores the government’s growing concern about the widening income gap and threats of social unrest, is setting off a battle with American and other foreign corporations that have lobbied against it by hinting that they may build fewer factories here. …

Whether the foreign corporations will follow through on their warnings is unclear because of the many advantages of being in China — even with restrictions and higher costs that may stem from the new law. China’s economy has become one of the most robust in the world since the emphasis on free markets in the 80’s encouraged millions of young workers to labor for low wages at companies that made cheap exports. As a result, foreign investment has poured into China….

Hoping to head off some of the rules, representatives of some American companies are waging an intense lobbying campaign to persuade the Chinese government to revise or abandon the proposed law.

The skirmish has pitted the American Chamber of Commerce — which represents corporations including Dell, Ford, General Electric, Microsoft and Nike — against labor activists and the All-China Federation of Trade Unions, the Communist Party’s official union organization.

The workers’ advocates say that the proposed labor rules — and more important, enforcement powers — are long overdue, and they accuse the American businesses of favoring a system that has led to widespread labor abuse.

So despite Americans' parlous economic plight, China's repression continues to make it a magnet for U.S. corporations discarding U.S. workers and relocating to China.

It is hard to envision a way out of the current job-destroying recession without confronting this fundamental fact of U.S. economic life, and the lack of genuine democracy in America that it reflects.