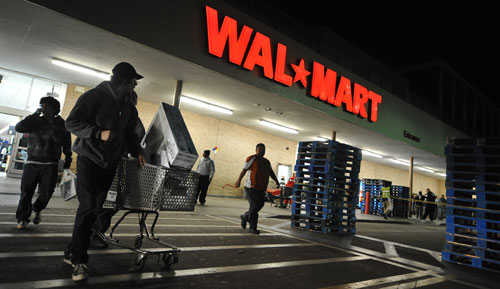 Shoppers wheel their purchases out of a Wal-Mart store in Los Angeles, Calif., before dawn on Black Friday, 2009. The annual sales bonanza is held one day after the Thanksgiving holiday.   (Photo by ROBYN BECK/AFP/Getty Images)

You'll have to excuse us here at Working In These Times, as the Thanksgiving holiday break caused us to miss an important—but perhaps unsurprising—story last week.

A few days before Wal-Mart successfully prevented "Black Friday" shopper fatalities (unlike last year), the world's largest retailer was slammed by the human rights group China Labor Watch (CLW) for allowing a litany of worker abuses in at least five of the countless Chinese factories that together produce $18 billion worth of products for company.

In a sense, the report's big news isn't news at all: It's about what hasn't happened. CLW 's criticisms focus on how little Wal-Mart has genuinely and systematically changed its practices in response to previous criticisms, instead focusing on image and individual factory improvements while conducting lackluster audits that fail to uncover all labor violations.

"Corporate codes of conduct and factory auditing alone are not enough to strengthen workers’ rights if corporations are unwilling to pay the production costs associated with such codes," the report notes. "As the world's largest retailer, Wal-Mart leverages its massive product orders to purchase goods at low prices, and workers suffer the financial burden."

Although Wal-Mart's "Ethical Standards" team has promised to create new sourcing policies, force its supplier factories to adhere to higher standards, and revamp the company's audit system, CLW's investigations of Wal-Mart suppliers "routinely identified their failure to implement even Wal-Mart’s most basic standards," the report says.

Workers faced long (and illegal) overtime hours and a variety of abuses that range from wage theft to poor living and working conditions to preferential hiring practices. And CLW found that some factories ask workers to lie during factory audits.

At the Dongguan Dashing Decoration Ltd. factory, workers are at times required to work 24 hours consecutively. To add insult to injury, workers are paid just 44 cents per hour at the factory—"less than half the legal limit," the report says.

Here's a quick recap of the four major criticism CLW leveled at the company, after investigating five factories in China's Guangdong Province:

Wal-Mart pricing is too low. As the world's largest retailer, Wal-Mart leverages its huge orders to convince factories to sell goods at low prices that are not sustainable. This puts pressure on other brands to pay less, thereby setting a dangerous industry precedent…

Wal-Mart's audits systematically fail to identify all labor violations. …[S]ome auditors have a history of corruption, which allows violations to go undetected. After failing two Wal-Mart audits, factories may bribe auditors on the third audit to avoid losing Wal-Mart orders…

Wal-Mart's corporate structure needs to focus on real change and not on image. …Wal-Mart routinely turns a blind eye to poor conditions in supplier factories unless investigations are made public. Furthermore, even after an initial surge of activity following a report, factories investigated by CLW often revert to their original violations within one or two years. Wal-Mart has basic standards that it must enforce. It has the size and power to be an industry leader; Ethical Standards Program initiatives alone, however, will not result in the real change unless Wal-Mart's core corporate practices are addressed and revised….

Wal-Mart needs more transparent ethical sourcing efforts. First, it should be transparent about its response to allegations of violations in its supply chain and publicize steps taken to remediate factories... Second, Wal-Mart should clearly communicate the specific challenges facing its system and how new policies are to target such challenges.

On Thursday, Wal-Mart said it would start its own investigation into the report's findings, and take "prompt remedial action" if they are true. The company entered in China in 1996 and directly employs more than 50,000 people in its stores there, AFP reported. While it has allowed unions to operate in its Chinese stores, it has vociferously opposed unionizing activity in North America.

On Friday, the company scored a victory when Canada's Supreme Court ruled that Wal-Mart was within its rights when it closed a freshly unionized Quebec store in 2005, citing financial troubles. The company announced the closure the day a bargaining dispute was ordered into arbitration. 190 workers at the store voted to unionize in August 2004; only one other group of Wal-Mart employees, in Ontario, has reached a collective agreement with company managers. The company closed that store in 2008.

But the struggles of workers' in North America pale in comparison to what thousands of Chinese workers experience while manufacturing much of what sits on Wal-Mart shelves.