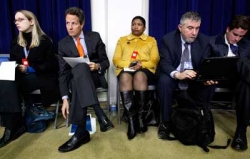 Today's suprising downturn in unemployment was welcome news, but there's still rampant unemployment amid a relatively slow recovery.  The still-troubling jobs picture throws into high relief a potential conflict between unions and progressives seeking ambitious jobs programs while the President is apparently still cool to major new expenditures on this front.  At best, he and his advisors on Friday sent mixed signals on how far he's willing to go, with the final outline of his jobs plan to be unveiled next week.

At the same time, labor leaders gave the president and his summit high marks, seeing in the event hopes for a powerful government response to the crisis.

He cited one quick-acting approach that's getting broad support from the White House, Congress and unions:  so-called "cash for caulkers," the weatherization of commercial and residential buildings that boosts the economy in the short term and strengthens it in the long term.

In addition, Steelworkers President Leo Gerard told Ourfuture.org's Isaiah Poole, " This President recognizes that jobs ... are now at the forefront."

Even so, the AFL-CIO has a five-point jobs plan that goes beyond what the White House seems inclined to support now. These measures include infrastucture spending and, along with Rep. Keith Ellison (D-Minn.), a  proposed new $40 billion public jobs plan for low-income communities that could produce one million jobs in a year.

The exact shape of any jobs-creation package in Congress remains murky, but the crisis is so bad that even 17 Republicans have joined in a bipartisan JOBS NOW! coalition launched by Illinois Democrat Rep. Bobby Rush. When the coalition was started in mid-November, Rush said, "The nation’s jobless situation is, indeed, a national crisis, and we need to put politics aside to discuss solutions that will help put America back to work." Indeed, as Rush has said, "Wall Street got its bailout, why should Main Street have to wait?" But aides to Rush say while this 131-member coalition expects to be helping shape the outcome of final legislation, with Rush's coalition emphasizing in part the importance of slowing jobs outsourcing and keeping manufacturing jobs here, it's still not clear what Speaker Nancy Pelosi is going to support: "The leadership isn't showing their hand," says one staffer.

Yet The Washington Post reported today about the President's reluctance to take on new deficit-expanding programs, apparently because he sees himself constrained by a mounting fedeal deficit as he seeks new federal spending for health care reform and the Afghanistan troops surge.  It could be that he's just facing a harsh political reality on Capitol Hill reluctant to take on new spending, as I reported in Truthout.org,  but progressives can't be encouraged by these latest signals from Obama:

Obama says he does not have the money for the plan many of his liberal supporters say packs the biggest employment punch -- direct federal investment in job creation. Instead, he came close to embracing a to-do list for the private sector that sounded rather familiar: weatherization, small-business incentives, regulatory and other help for exporters, and tax credits for employers who hire new workers.

Obama said the proposals could create jobs immediately, while providing long-term benefit at a relatively small expense to the federal government. "Overall, we generated a lot of important ideas," he said. "Some of them, I think, can translate immediately into administration plans and, potentially, legislation."

Speaking to 130 business leaders, union chiefs, economists and others summoned to the White House for the forum, Obama reassured his audience that some of the ideas he cited are under close consideration as his administration grapples with ways to improve the bleakest labor market in a generation.

Constrained by the staggering $1.4 trillion federal deficit, the president has been reluctant to endorse a specific job-creation plan, especially as about half of the $787 billion in stimulus funds remains unspent.

In contrast, the AP reported later on Friday about a more expansive jobs plan being considered by the White House:

The president plans to outline his list of ideas for a new jobs bill in a speech from Washington on Tuesday. Among the plans he's likely to endorse is an expansion of a program that gives people cash incentives to fix up their homes with energy-saving materials, senior administration officials said.

Obama also is leaning toward new incentives, either through the tax code or some other means, for small businesses that hire new workers and toward new spending for building roads, bridges and other infrastructure, said the officials [emphasis added]. They spoke on condition of anonymity because the package, and Obama's speech, are still being crafted and could change.

The president also is open to a federal infusion of money to cash-strapped state and local governments, considered among the quickest and most effective — though expensive — ways to stem layoffs. Officials stressed that Obama probably won't mention in his speech every job-stimulating idea he will eventually support...

Democrats on Capitol Hill have been pushing for a jobs bill for weeks and are pleased that that Obama is getting on the same page. Under pressure from House Speaker Nancy Pelosi, D-Calif., the White House and Treasury Secretary Timothy Geithner are now signaling that tapping unused Wall Street bailout funds to pay for a jobs measure is OK.

Because of growing anxiety about federal deficits, Obama has been stressing that government spending shouldn't be increased too much. During his jobs discussion with CEOs and academics at the White House on Thursday, he said it is primarily up to private business to create large numbers of new jobs, because "our resources are limited."

But using the bailout money to pay for a jobs bill would require issuing billions of dollars in new federal debt.

With job creation legislation  likely to wait until next year, even though an extension of unemployment benefits is expected this year,  how far Congress and the White House are willing to spend to save and create jobs remains up in the air.