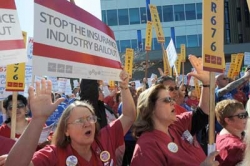 In a move that could ramp up healthcare worker organizing, three nurses’ unions joined together to form the new National Nurses United (NNU) at a convention in Phoenix on Monday and Tuesday. As we reported earlier today, the new 150,000-member union–bringing together the California Nurses Association/National Nurses Organizing Committee (CNA), the United American Nurses (UAN), and the Massachusetts Nurses Association–will be the largest union of nurses in the country.

But only 20 percent of roughly 2.5 million registered nurses (RNs) in America are organized, and they’re scattered across many unions–Service Employees (SEIU), AFSCME (public employees), Teachers (AFT), and many more, including the National Federation of Nurses.

National Nurses United hopes to unite all RNs and become the leading advocate nationally for nurses.  “We hope to have all nurses united under one banner,” says former UAN secretary Jean Ross. All the NNU constituents broke away at different times from the American Nurses Association, which they saw as dominated by management interests.

As a united effort, NNU hopes that its combined resources and greater geographic coverage–about 23 states with at least one collective bargaining contract—will make it possible to better organize nurses at the workplace and in politics.

“What we believe it will accomplish is to provide strength in numbers, and with unification of state nurses associations to speak with one voice on patient advocacy, healthcare reform, workplace advocacy, the nursing profession, and how we move this country forward,” says Deborah Burger, the former CNA president who will be one of three NNU co-presidents. “Working together we’ll be out there nationally,” continuing CNA’s strong support for a single-payer healthcare system.

“We see every single day insurance companies trying to default on their responsibilities,” Burger says. “We will push for what will save lives and money and be the right thing in the end.” That will include, in addition to single-payer insurance reform, federal legislation mandating a minimum ratio of nurses to patients, similar to a law CNA got passed in California.

And, Ross adds, “we want to move forward on organizing faster than we are.” NNU plans to organize in states where it does not have a base, as well as where it has members and contracts. It will encourage associate memberships as well as try to organize RNs in hospitals.

Earlier this year, CNA and SEIU signed an agreement that CNA–and now NNU–will organize nurses whenever SEIU is organizing the rest of hospital workers. It was a victory for CNA and NNU’s strategy of craft unionism over the industrial union approach of organizing all hospital workers in one union.

Three co-presidents, one from each affiliating union, will lead the new union and serve as part of an executive committee of vice-presidents weighted to reflect the membership.