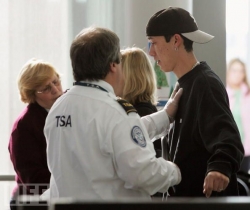 If we let the workers unionize, then the terrorists will win. That was the gist of Sen. Jim DeMint's comments on Fox News Sunday, when he lashed out at the Obama administration for failing to stop the famously botched Christmas Day terrorist plot.

In a stunning display of rhetorical jujitsu, the Senator from South Carolina decided that the Detroit terror incident was the perfect segue for a swipe at organized labor. Matt Duss at Think Progress posted a clip (viewable below) in which DeMInt manages to tie together unions, homeland security, Iran nuclear talks, and closing Guantanamo Bay. Yes, the prospect of airport screeners joining a union poses a national security threat.

DEMINT: And this is at a time, as Senator Lieberman said, that we’ve got to use our imaginations, we’ve got to be constantly flexible, we have to out-think the terrorists. And when we formed the airport security system, we realized we could not use collective bargaining because of that need to be flexible. Yet that appears now to be the top priority of the administration. And this whole thing should remind us, Chris, that the soft talk about engagement, closing Gitmo, these things are not gonna appease the terrorists. They’re gonna keep coming after us, and we can’t have politics as usual in Washington, and I’m afraid that’s what we’ve got right now with airport security.

Actually, “politics as usual” is what we’ve got with Sen. DeMint’s blatant attempt to exploit a failed terrorist attack to go after two conservative bugaboos, “appeasement” and unions. But neither engagement nor closing Gitmo represent anything like "appeasement.” ...

It’s unclear what, if anything, “union bosses’ collective bargaining” has to do with the failed airliner attack, other than that DeMint doesn’t like unions, and will use any excuse to attack them.

When it comes to connecting the issues, DeMint does seem to have quite an imagination. Of course, one of the reasons the Transportation Security Administration is in such disarray now is precisely because DeMint and other Republicans have stealthily stonewalled Obama's pick to head the agency, Erroll Southers. Apparently, Southers, who managed airport security at Los Angeles International, came across as a little too labor-friendly for the GOP's taste. And so conservatives have decided to hold national security hostage until they get their way.

As Megan Carpentier at AirAmerica contends, "For Demint, the unionization of the people paid to keep terrorists and their weapons off planes is a greater threat to this nation than the terrorists plotting the deaths of Americans."

Well, now the right gets its bragging rights: the nomination remains blockaded, and a leading obstructionist now argues that it's in fact Obama's fault that the agency is not up to speed. The Politico quotes a DeMint spokesperson: "many Americans don't want someone running the TSA who stands ready to give union bosses the power to veto or delay future security measures at our airports." Sure, just ask the folks whose flights were arbitrarily delayed this week, by government fiat, not a mythical union honcho.

Meanwhile, labor advocates cite security concerns as all the more reason the White House should push through the appointment process. Critics pointed out on Free Speech Radio News that the response to the September 11 attacks were led by police and emergency-response forces that were heavily unionized.

While the Obama administration wrestles with the controversy over airport security, someone should brief the ever-imaginative DeMint on the reality that there's more to be afraid of in our airways than organized government workers.

A short version of this post appears on AirAmerica