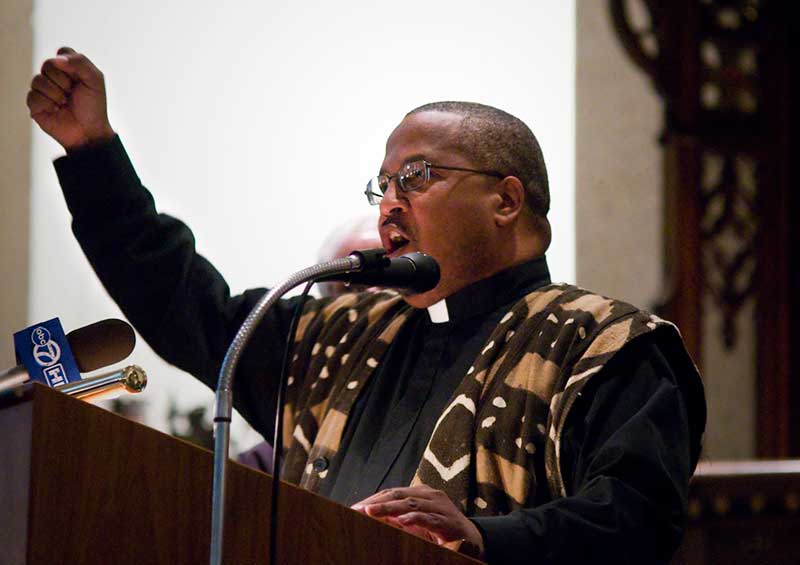 CHICAGO—Wal-Mart and this city don't get along very well.

In 2006, Wal-Mart opened its first store in Chicago—not long after after the city's aldermen passed a controversial "big box" living-wage ordinance, which Mayor Richard Daley promptly vetoed. The West Side location remains the company's only foothold in the country's third largest city.

But that soon may change.

Today, with the Great Recession still raging and Chicago desperate for development after its failed Olympics bid, the battle between the world's biggest retailer and the Windy City is back, and as politically divisive as ever.

Wal-Mart wants to build as many as five new stores in the city. Daley, citing the need for jobs and economic recovery, hopes that happens. Many members of City Council, who have close ties to unions, say not so fast.

Many Chicagoans' anger at Wal-Mart was on display yesterday, as more than 1,000 people gathered to rally at a church on the city's South Side, where the company would like to build its first "supercenter" store. The Dr. Martin Luther King, Jr. Day "Celebration and Public Meeting," organized by community activist groups including Southsiders Organized for Unity and Liberation (SOUL), in part focused on Wal-Mart.

SOUL, along with the Illinois Indiana Regional Organizing Network, Northside P.O.W.E.R. and the Northwest Indiana Federation of Interfaith Organizations, want Wal-Mart to provide "community benefits" like living wages and local hiring and allow workers to organize in exchange for building the new store, which would be in the city's Chatham neighborhood.

Rev. Booker Vance of St. Stephens Lutheran Church, a member of SOUL, invoked King's legacy while describing Wal-Marts as modern-day "plantations" providing employment akin to slavery. "What's left if not a living wage?" Vance asked. "To those who say 'jobs or else,' I say living wage or else! You shouldn't have to work 40 hours a week and still scrape by to make ends meet."

After calling labor officials from SEIU and UFCW unions and Jobs with Justice (among others) to the stage, Vance called on five city council members to support a living-wage ordinance (the "Good Jobs Chicago Community Benefits Amendment") that would force Wal-Mart to pay workers $11.03 per hour in exchange for final approval of the store. (Specifically, the ordinance would require any company with 50 or more workers to pay the wage if it benefits from a city subsidy; businesses not receiving subsidies would not be subject to the rule.)

Vance also called on the aldermen to:

The aldermen, including individuals who voted for the 2006 "big box" resolution (which would have mandated $13 an hour in wages and benefits), stood next to the pulpit and enthusiastically said "Yes." But their support doesn't ensure the measure's passage, even as South Side residents condemn Wal-Mart's labor practices and organized labor flexes its muscles.

In 2007, unions punished Daley's veto—the first and only time he has vetoed a City Council decision in his now 21 years as mayor—by refusing to support his re-election campaign and helping to elect a number of pro-labor aldermen. Daley could bypass the City Council this time around by granting "administrative approval" for the Chatham Wal-Mart, but he has said he won't. "You don't want to push something down someone's throat," Daley recently told the Chicago Sun-Times. "Nothing happens then. You have to educate people and that's what this is all about."

(An alderman, anonymously quoted by the Sun-Times, revealed that despite labor's nationwide decline in influence, Chicago is in many ways still a union town: "The unions are the only game in town as far as organization goes," the official said. "Nobody wants to do anything to p--- them off.")

So far, Daley's educational efforts haven't borne much fruit—Sunday's rally attendees were in no mood for reconsidering what Wal-Mart has to offer Chicago. But aldermen are certainly feeling pressure to back away from the new living-wage ordinance, which was withdrawn from discussion early last week after some aldermen met with retail industry representatives. The Sun-Times reports that the developer of the South Side Wal-Mart is in default, and could file a $30 million lawsuit against the city for failing to approve the store after changing the site's zoning for development.

The president of the Illinois Retail Merchants Association said the new living-wage ordinance would have prevented smaller businesses from setting up shop in Chicago. “Nobody is going to leave, but they certainly would not invest in Chicago,” David Vite told the Chicago Tribune last week. “We shouldn’t be putting roadblocks to employment up in Chicago.”

Daley has similarly argued that new Wal-Marts would mean more jobs for Chicagoans. “People are getting laid off,” Daley said last month. “There’s no future jobs. People can’t get jobs. They’re not only being laid off, they’re being eliminated out of their companies."

To be sure, Wal-Mart would be hiring people to run its new stores, should any be built in Chicago. But a new study of the local impact of Chicago's existing Wal-Mart underscores the fact that new jobs aren't much to celebrate when they effectively eliminate the same number of existing jobs.

"The Impact of an Urban Wal-Mart Store on Area Businesses: An Evaluation of One Chicago Neighborhood’s Experience," released last month by researchers at University of Illinois at Chicago and Loyola University, concluded that 300 full-time jobs were lost in the area due to the opening of the West Side Wal-Mart three years ago, and that there was no net growth in employment in the area. Researchers said that

Overall, the weight of evidence suggests that the Wal-Mart opening on the West Side led to the displacement of a range of businesses. There is no evidence that Wal-Mart sparked any significant net growth in economic activity or employment in the area. .. [T]he conclusions reached here are similar to those other researchers have found for Wal-Mart impacts in small towns and suburbs. Under the circumstances, claims that the Chicago Wal-Mart has led to significant economic development in nearby areas must be considered skeptically.

“These estimates support the contention that urban Wal-Mart stores absorb retail sales from other city stores without significantly expanding the market. … [P]lacing a Wal-Mart in an urban setting is basically a ‘wash’ in terms of sales revenue for the city and jobs for local residents,” said co-author David Merriman, head of UIC’s economics department. “This means that communities around the city should not see Wal-Mart, and other big-box retailers, as a panacea to local economic struggles.”

Wal-Mart has disputed the study, saying it doesn't account for new stores opening in the area. (To read an opinion of the Loyola/UIC study prepared for Wal-Mart by a third-party consulting firm and released last week, go here; it claims there has been a net gain of 428 jobs in the area since the Wal-Mart opened.)

For anyone who's read earlier studies looking at the impact of Wal-Marts on local economies, the new study isn't shocking. Other economists and researchers have highlighted "the dark side of Wal-Mart’s economic impacts," as Wal-Mart Watch says, citing a study showing that each Wal-Mart worker replaces about 1.4 non-Wal-Mart retail workers.

So what will happen next in Chicago? Expect the stalemate to continue. The groups sponsoring Sunday's MLK Day rally said Wal-Mart representatives didn't respond to requests to meet with them, and it's unclear if and when an alderman might formally introduce the living-wage ordinance for a vote. And with labor still a big player at City Hall, don't expect Daley to sign off on the new store by executive fiat as he eyes yet another re-election bid next year.

But with the recession continuing and nothing but a jobless recovery in sight, Daley, Wal-Mart and other business interests will surely continue to argue that Chicago needs all the "development" it can get, even when it causes the shuttering of local businesses and doesn't provide workers with enough money to live on.

If the City Council members feel the kind of anti-Wal-Mart heat present at Sunday's rally, they might stand tall. But if popular energy dissipates, it's a real possibility that one more Wal-Mart could be coming to Chicago, much to the chagrin of organized labor. It could be a replay of 2004, when aldermen approved one location while denying another (the South Side location that was later rezoned).

Six years later, the pressure for economic "growth" at any cost is greater than ever. Odds are, the new decade will deliver to the world's biggest company the urban conquest its been pushing for since 2004.

This article has been updated since it was first published.