From Plant Shutdowns to Plasma, Cerberus is Financial Vampire 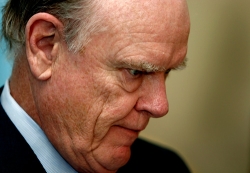 Somehow, the special congressional committee on the ruinous Wall Street meltdown appears incapable of asking the right questions to understand and prevent another financial crisis.

Now one of the most powerful Wall St. players is displaying a new level of contempt for the public, thanks to the deregulated status enjoyed by private equity firms. Cerberus Capital, named after the three-headed dog from Greek mythology who guards the gates of Hades to prevent anyone from escaping, is truly living up to its name.

Cerberus essentially invests strategically to buy profitable corporations and sell off or shut down parts of the business to maximize profit, without regard to the fate of workers, who are mere collateral damage.

The ruthlessness of Cerberus knows no bounds, as revealed this month by a splendid Alternet story. Just as needless and destructive plant closings are allowed in the U.S. despite the human costs, the country is one of just a tiny group of nations that deems it proper for the sale of blood to be a source of profit:

[Cerberus] recently made a $1.8 billion killing on its human plasma investment, a company called Talecris. Talecris was purchased for a mere $82.5 million just four years earlier, meaning Cerberus made 23 times its investment on human plasma.

This was accomplished by the most savage, heartless means possible: by paying peanuts to impoverished human plasma donors, who increasingly come from Mexican border towns to blood-pumping stations set up on the American side, jacking up the price of plasma by restricting supply (a lawsuit filed by the Federal Trade Commission accused Cerberus Plasma Holdings of “operat[ing] as an oligopoly”), and then selling the refined products to the most desperately ill—patients suffering from hemophilia, severe burns, multiple sclerosis and autoimmune deficiencies.

The products cost so much—one, IVIG (intravenous immunoglobulin) cost twice the price of gold as of last summer—that American health insurance companies have been dropping or denying their policyholders in increasing numbers, endangering untold numbers of people.

So the three-headed dog has vampire-like qualities as well. Now, with the hard-core right types stirring up both the fear of increased gun control and the fantasy of Obama rounding up conservatives in "detention" camps (this loony theory is being spread by a new rightist groupd called the Oath Keepers ), the guns and ammunition industry is soaring.

Cerberus is planning to buy up a number of arms and ammunition makers, consolidate them into an entity called "the Freedom Group," and extract yet more profit even if it fuels bloodshed in America.

It looks like the firm is operating almost like Milo Minderbinder Enterprises in Joseph Heller's classic satire Catch 22: driving up the price of blood at the same time it prepares to help more blood be spilt on American streets.

Speaking of American streets, Cerberus also owned Chrysler for a while, viewing it not as a major American employer providing the economic core of many communities, but as simply a carcass to be stripped. Founder Stephen Feinberg, who collected $330 million in 2007, made this clear in a 2008 memo to his investors:

We do not need to be heroes to earn a good return on the investment in Chrysler. We do not need to transition the car industry or even to return Chrysler to a much stronger relative position in the U.S. car market in order to be successful.

For example, Cerberus bought up a set of paper plants and quickly closed several of them, including Wisconsin's most technologically advanced and profitable paper plant in Kimberly, Wis., which employed 600 workers averaging 28 years of service. Cerberus even spurned offers from at least four other companies seeking to buy the plant, calculating that it would reap larger profits by reducing the supply of paper.

In the face of a strong battle by the United Steelworkers, who staged a massive rally of 5,000 right after the closing, and pressure from Wisconsin Rep. Steve Kagen, Cerberus and its NewPaper subsidiary promised that they would consider offers to sell the plant and save the jobs. But these assurances proved hollow, as a NewPaper spokeswoman admitted to me that the company had no plan for marketing the plant. Of course, the facility still stands vacant.

Thanks to U.S. taxpayers, Cerberus "earned a good return" on Chrysler despite of the huge hit the entire auto industry took after the Wall Street collapse. Journalist Mark Ames summarized the Cerberus role: "The firm blamed everything on unions (even after firing 30,000 Chrysler employees), and dumped the companies onto American taxpayers—but only after lining up tens of billions in taxpayer-funded bailout funds."

For more In These Times stories on private equity, see "Pirates of Private Equity" and "Pulp Friction."