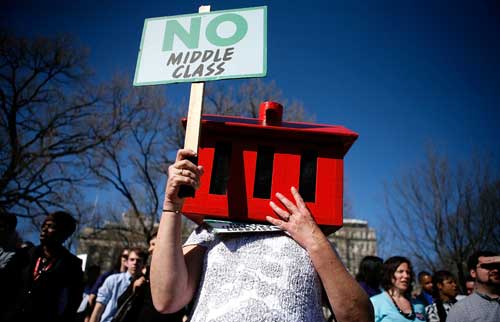 A couple months ago, a student of mine at the University of Wisconsin-Milwaukee got desperate for money to support himself and his son, and applied for a job at Target.

Even before working a single minute, Target subjected him and other new workers to a "captive audience" meeting where a slick, hard-hitting anti-union video was aired.

There's no union drive going on in Milwaukee among Target workers, but the giant retailer—like much of Corporate America—isn't taking any chances with a Democrat in the White House, and passage of the Employee Free Choice Act (EFCA) on the political horizon.

Target is starting its indoctrination early, because like other big retailers such as CVS and Ikea, the Swedish-owned home furnishings company, it has been worried about the now-remote possibility that a strong EFCA could be enacted. As originally drafted, the legislation would provide for speedy elections, curb management threats, and provide for recognition of the union when a majority of workers signed authorization cards.

Prior to the victory of Republican Scott Brown last week in Massachusetts, which deprived Democrats of their theoretically filibuster-proof 60 vote edge needed for even a watered-down EFCA to win, Target was stepping up its campaign to prevent unionization efforts that, they feared, would materialize if EFCA ever passed:

"Minneapolis-based Target, the second-biggest U.S. discount retailer, updated its anti-union video for employee training to explain the consequences of the bill, company spokeswoman Donna Egan said in an e-mailed statement," reported Bloomberg News, picking up on information dug up by Mike Whitney at FireDogLake.

The anti-union carpet-bombing is incessant, almost universal in the private sector with management fully exploiting its unilateral access to workers on the job. Further, the anti-union war is now accelerating against public-sector as well, observed sociologist Stanley Aronowitz, former union organizer who has written extensively on labor.

Corporations have been actively trying to influence not just their workers, but their investors and the general public as well, against unions. Michaels Stores, the arts and crafts supply chain, is trying to mobilize its stockholders, portraying worker's right to organize as a  threat to the company:

If the Employee Free Choice Act is adopted, it would be easier for our associates to obtain union representation and our businesses could be adversely impacted."

Most galling was the parade of corporate executives and lobbyists who came to the Capitol seeking government bailouts--representing workers' taxes-- about a year back. At the same they were seeking handouts, they also systematically met with the senators and congresspeople from their states to urge them to oppose the EFCA, as witnessed by United Electrical workers political director Chris Townsend .

The anti-union fever is now intensifying in the public sector, where 37.4% of the workers are unionized. To help attract a new Honda plant--which very carefully selected an "anti-union, pro-Klan" site in southern Indiana--Gov. Mitch Daniels managed to wipe out public employee bargaining rights.

Other public officials like Milwaukee County Executive Scott Walker---also the leading Republican gubernatorial candidate--are using budgetary problems and the economic crisis to drive a wedge between supposedly "over-paid" public employees and the general public, and then exploit that resentment as an opening to promote more and more privatization of public-sector jobs.

Even at the University of Wisconsin campus in liberal Madison, university officials are flatly prohibiting international students from joining a new graduate research assistants union. Top UW administrators have been claiming that joining a union might somehow jeopardize their student visas. "It's in their best interests to not be covered," said the university's human relations director.

Richard Boris, director of the National Center for the Study of Collective Bargaining in Higher Education and the Professions—funded by both labor and management organizations—at the City University of New York’s Hunter College, called the university's position "astonishing"  and "absolute malarkey."

For Peter Rickman, president of the Teaching Assistants Association (an American Federation of Teachers affiliate) at UW-Madison which is organizing the research assistants, the right of international students to join a union is a simple matter of justice: "If they are not included in the bargaining unit, they will not be covered by the contract. There is no good reason to exclude people from these basic rights."

Rickman's sentiment was echoed by State Rep. Cory Mason, a Racine Democrat and former AFT organizer himself, who stated, "This is the only bargaining unit I know of anywhere in the country that discriminates against people based on what country they're from."

At this point, the National Labor Relations Act of 1935 has been so trampled on that it cannot effectively protect workers rights. Employers have long understood that they preserve their wealth and power by illegally firing pro-union workers as rapidly as possible.

A "culture of impunity" prevails as the cost of providing wrongly-discharged workers with back wages, if the company is found in violation, is trivial compared with the savings in higher wages and more benefits and avoiding the obligation to negotiate with the workers as equals. In 2005, for example, 31,358 workers were illegally fired in the U.S.

Corporations' sense of "impunity" is likely to remain strong in the near future, barring an all-out grassroots revolt by workers, thanks to the continuing effectiveness of the filibuster—now used routinely to block almost any Democratic legislation—and the Republicans' refusal to allow President Obama's National Labor Relations Board board nominees to be considered. The board currently has just two members, Bill Clinton and George W. Bush appointees, respectively.

The result is endless delays, as in the case of workers at a Brooklyn home for the developmentally disabled. Six years after voting on unionization, they are still waiting for the NLRB to certify the outcome.

Despite all the pounding, American labor still has the potential power of 15.3 million unionists. But membership as a percentage of the workforce has been dropping, especially with the Great Recession producing major job losses in unionized manufacturing plants and construction sites. As David Moberg reported last week, and as the Wall St. Journal reported:

Organized labor lost 10% of its members in the private sector last year, the largest decline in more than 25 years. The drop is on par with the decline in total employment but threatens to significantly limit labor’s ability to influence elections and legislation.

With unions losing members and thus leverage at the bargaining table, corporations and the rich are able to snatch an ever-greater share of the wealth their workers create, reports Too Much, the always-interesting e-newsletter written by Sam Pizzigatti :

In 2010, the [congressional Joint Committee on Taxation] calculates, a little over 1 million U.S. taxpayers will report incomes over $500,000. These 1 million top-earners will collect an astounding $241 billion more in income this year than the just under 80 million taxpayers who will take home less than $40,000.

There's a clear link between the above statistics: as workers lose the power to bargain for their fair share of the wealth that they create, America grows ever more unequal. Every day seemingly moves America further away from being a middle-class society, as Elizabeth Warren, chair of the Congressional Oversight Panel on economic recovery recently warned.

The super-rich have far more than they can ever possibly need, but they continue to relentlessly take away our lunch money by taking away our unions.