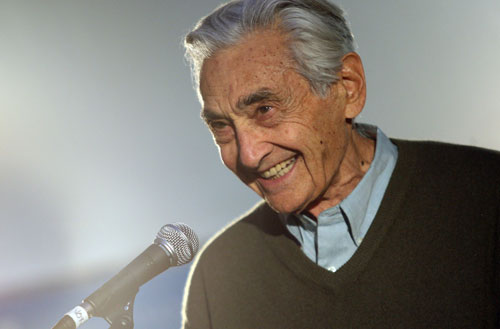 Yesterday, America lost one of its foremost voices for peace, workers' rights and social justice: Howard Zinn, the historian, playwright and—above all else—activist who inverted the traditional telling of history to place common people at the center, rather than rulers. By this simple, radical act, he undermined the status quo and helped us view the world through a more humane lens.

Zinn, who was 87, died of a heart attack in California. The Boston Globe has a good obit here (he was a longtime professor at Boston University), and excerpts from his graphic novel, A People History of American Empire, which he published at the young age of 85. Henry Giroux, Zinn's colleague and comrade at BU, offers a powerfully personal remembrance here.

Lots of ink will be spilled in the coming days exploring Zinn's life (a long and fruitful one, by any reckoning). We here at Working In These Times thought we'd offer a few personal recollections, along with some videos of Zinn himself.

As a native son of Plymouth, Mass., I was impacted by Zinn's People's History of the United States in a very specific way: It directly challenged the established narrative of Pilgrim history, which was (and essentially continues to be) so dominant in that town and beyond as to be almost doctrine. Pilgrims were the heroes, at the center of Plymouth's (and, indeed, America's) history, while native Americans were marginal at best, and obstacles to "progress" at worst.

Zinn exploded that imperialist viewpoint, and by doing so made me realize that history is not just written, but debated. Nothing is ever really settled, as much as those in power wish it were so.

The first and only time I saw Zinn in person was in October 2003 in rural Minnesota, where I was finishing up college, majoring in American history in no small part due to Zinn. I saw him speak in a chapel, about topics you'd expect: war, peace, Iraq, the Bush administration, imperialism. Nothing that he said particularly surprised me—which doesn't mean his words weren't powerful.

Actually, one thing was surprising: his insistence that voting is not activism, but rather a basically perfunctory exercise that tends to serve the status quo. Real change, he said, is made in the streets. He was calling the assembled college students to a lead a fully democractic life, rather than the life of an occasional voter—or worse: apathy.

What also surprised me was that this old man (then 81), with a slightly quavering voice, still radiated such a powerful moral vision and sense of justice. I was only 21 then, but I remember doubting very much, as I bought a new edition of People's History in the chapel lobby, that I could possibly sustain my sense of outrage and empathy (so essential to outrage) for the next 60 years. Zinn did, and he continued to do so until his death yesterday. He's a model for us all.

The first time I saw Howard Zinn speak was at a conference of the National Association of Street Newspapers in Boston, to an audience of people largely homeless or at risk of homelessness.

They were living first hand many of the issues of inequality, racism and injustice that Zinn spent his life addressing. But many did not have the advanced educations or political sophistication that would be more typical of Zinn's audiences at universities, conferences or activist events. Some of the street newspaper writers and other homeless folks at the conference were highly patriotic and/or socially conservative.

I just remember how despite the lack of agreement with or awareness of the leftist analysis Zinn put forth, people in the room connected with him in an incredibly vibrant, warm, political, energized and ultimately revolutionary way...and you could tell Zinn was excited, touched and humbled to be in a crowd of people from such diverse backgrounds and ideological viewpoints where a feeling of empowerment was spontaneously arising.

There was an endless demand for questions and comments, and Zinn stayed long after his appointed time until building staff literally kicked everyone out. I had not read any of Zinn's work at this point but I felt like I had just been in the presence of an amazing person who honestly loved humanity.

I feel like I’ve lost a dear and beloved friend. The world has lost a truth-teller, a man who looked at history the way it is – not the way a group of people in power would have us believe. He gave me hope and heart that there are righteous truth seekers out there not willing to go along with the status quo. He enlightened and taught young minds about this country’s murderous history – of its genocide and plunder but also how this country was truly built by hard-working men and women, and by people of color, and that we all had a right to be here.

I will miss this peace-lover, civil rights supporter, and courageous man. May his work continue through the people whose minds he touched.