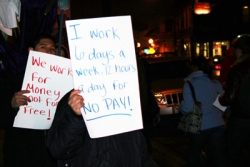 Former workers of Ole Ole protest outside the restaurant in Chicago's Andersonville neighborhood, on Thursday, February 4.   (Photo by Mo Williams)

CHICAGO—The lights aren't on at a swank restaurant on this city's north side, but that didn't stop a group of former employees from demanding what they say are stolen wages.

A group of 20 workers and community members took the quaint Andersonville neighborhood by surprise Thursday, with their second evening protest in front of the posh Mexican eatery Ole Ole. They announced their filing of a federal lawsuit and National Labor Review Board complaint over claims they are owed significant amounts of back pay.

As previously reported on this blog, former workers at the restaurant claim they are owed over $100,000 in lost wages, tips, and damages. In December, the restaurant narrowly averted a protest -- organized by the Chicago branch of the Restaurant Opportunities Center (ROC), a national organization previously profiled on Working ITT -- with a last-minute agreement to negotiate with workers.

But according to organizers and workers, little came of those negotiations. On Thursday, workers filed a lawsuit demanding the workers' pay -- and protesting and leafleting in front of the now-closed restaurant.

Juvenal Mendoza was a runner and waiter at the restaurant for two and a half years, up until its sudden shuttering several weeks ago. He claims he is owed for eight months of work.

Mendoza continued to work despite not being paid because he felt bad for the owner, who he says was struggling financially. But according to him, she never paid him for those eight months and did not inform him of the restaurant's closing.

"I wanted to help her out," he said. "But she didn't even call me or tell me when she was closing."

A call to Ole Ole revealed the line was temporarily out of service.

Veronica Avila, coordinator of ROC Chicago (CHI-ROC), said the organization did not want to picket in front of the restaurant, but Pavone left them no choice.

"We wanted to settle this amicably," she explained, noting her initial hope at the owner's response to a December letter from CHI-ROC regarding the workers' back pay that resulted in a negotiation session. Since then, however, things have stalled.

"She recognized that she owes the workers money, but we haven't heard from her since," Avila claims.

According to Avila, workers first came to the owner well before the restaurant's closing with a signed letter demanding their pay. Immediately after, one worker was given one shift a week instead of his usual six.

"It was clearly retaliation," she argued. "Money clear wasn't the issue, because she wasn't even paying him an hourly wage."

Ole Ole is CHI-ROC's first major campaign since the organization's inception a year and a half ago.

Andersonville is known as a liberal neighborhood, and passers-by seemed shocked at the establishment's alleged misdeeds. One bystander walking by expressed disappointment upon hearing workers' claims -- he liked the restaurant, but would not return. In an area that fashions itself as a "quaint village" within the city, CHI-ROC says word will travel fast about an abusive company.

"This is a pretty tight-knit, progressive community," Avila said. "Residents don't want bad businesses like this to be the face of Andersonville."

The problem of wage theft has recently risen to national attention, with a number of community organizations and workers centers taking up the issue.

For its part, CHI-ROC organizers say they will have weekly actions to pressure the owner to return to the negotiating table.