‘More Terror’ in Honduras, as Another Unionist Murdered 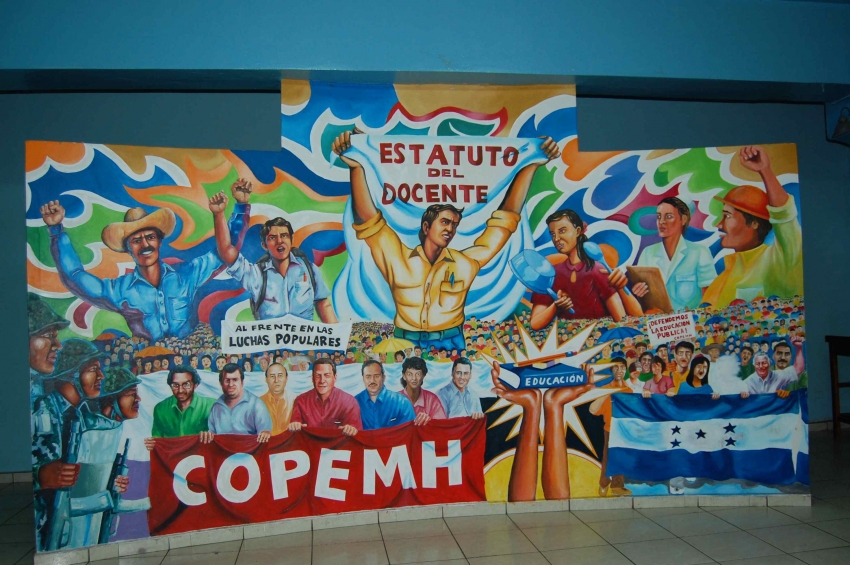 A mural celebrates the Honduran teachers union; several of its members have been killed since the coup last June.   (Photo by Victoria Cervantes)

The body of 29-year-old Vanessa Yamileth Zepeda, still dressed in her nurse’s scrubs and killed by a bullet, turned up in the Loarque neighborhood of Tegucigalpa, Honduras, on February 4. Zepeda had young children and was a leader of the SITRAIHSS labor union (Workers Union for the Honduran Social Security Institute). She had been abducted that afternoon while leaving a union meeting.

The administration of the newly inaugurated President Porfirio "Pepe" Lobo has called Zepeda’s murder and other recent attacks common crime. But the Honduran resistance movement – mobilized since the June 2009 coup against then-president Manuel Zelaya – see it as a clear message.

Trade unionists, especially public sector workers like Zepeda, are among the strongest and largest factions making up the resistance coalition. Opposition to powerful unions was apparently among the motivations for the coup in the first place, and all the country’s major union federations are part of the resistance front.

Unions are an impediment to neoliberal pushes to increase privatization, and foreign companies fear clashes with unions or unionizing efforts in Honduras’ maquila (factory) sector.

Since Lobo’s inauguration on January 27, there have been 10 to 15 assassinations of resistance members and leaders, according to Victoria Cervantes, a Chicago activist who recently returned from meeting with unionists and other groups in Honduras with the group La Voz de los de Abajo.

Since the coup, a number of people have been killed and thousands arrested and detained. Most of the previous deaths involved police and soldiers opening fire on crowds or attacking people in the midst of protests. Such open state violence has ebbed in recent weeks.

But the targeted kidnapping, torture and assassination of a handful of activists like Zepeda is more chilling and evokes hallmarks of the ruthless right-wing death squads of the 1980s in Central America and more recently in Colombia, according to human rights groups.

(Jeremy Kryt has been reporting from Honduras on such human rights abuses for In These Times.)

“Before you might have had 300 army trucks storming through Tegucigalpa,” said Cervantes. “That could be terrifying, but what’s probably more terrifying is the idea that if you are identified as part of the resistance movement, you or your daughter could be snatched up and tortured. This is more terror at a lower political cost.”

Trade unionists and gay and lesbian groups, who have become increasingly visible and organized as part of the resistance, have been the main focus of recent attacks and intimidation. Campesino communities, especially those involved in contested land takeovers, have also suffered recent increases in violence and repression from police and landowners.

“Campesinos have always suffered some level of violence, but this is different,” said Cervantes.

There have reportedly been beheadings and a man’s tongue was cut out. Cervantes said Honduran officials known for paramilitary activity in the 1980s have also resurfaced as part of the coup and/or in Lobo’s conservative party.

“It’s the same actors as the ‘80s, and they’re desperate to terrify the resistance out of existence,” said Cervantes. “Again, it’s multinational companies tied in with the oligarchy. History keeps repeating itself.”