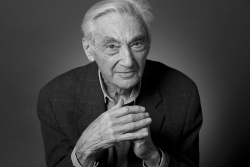 When Howard Zinn passed away on January 27, we lost a champion of the progressive movement and working people. Zinn was able to do what other academics only can dream of: reach large numbers of Americans. He became a cultural figure during the last 15 years. As the author of 20 books, through his years as a teacher, Zinn seemed a man on a mission.

Howard Zinn reminded whole generations that workers mattered. His work synthesized that of a whole generation of labor and working-class historians for a larger audience. Thousands of high-school students, college students, and just plan regular folks read his work and learned a great lesson.

His passing marks the loss of a generation of left intellectuals whose aim was to reach beyond the academy, and into the streets. I think of Studs Terkel, who passed in 2008, as another hero gone. These were men who were not careerist academics, were dedicated activists and intellectuals—they didn’t see a divide. They inspired our generation to be more than a witness and chronicler of our world. They reminded us of the power of the word.

Zinn’s greatness was his ability to place workers, slaves, indigenous people and others lacking power back into history as players not victims. Sure, other have done this. But few have done it as gracefully and with such talent. We forget that Zinn was a very good writer, something many ignore and too few emulate. His ability to fold into his narrative the details of the past allowed thousands to enter into the conversation.

Rereading A People’s History after his death, I was blown away by his narrative force, the beauty of his prose, and force of his argument. He did not bend one for the other. They seemed naturally to fit together. And, I think that was his genius, this ability to be writer, historian and radical at once.

In reading the obituaries and remembrances of Zinn, I am sad not just for those who knew him well, as that is a loss I can only imagine. What saddens me, honestly, is that there appears to be no great emulators. Where is our generation’s Howard Zinn, the warrior intellectual?

I hope s/he emerges soon. We need them.