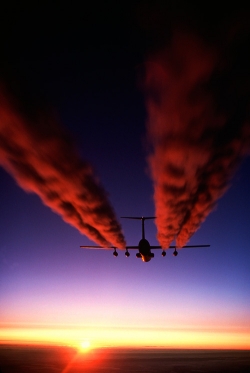 A C-141 Starlifter leaves a contrail over Antarctica. Pratt & Whitney manufacture the aircraft's engine, along with a variety of other engines under military and commercial contracts.   (Photo courtesy of Karl Dickman via Wikipedia)

Machinists at two Connecticut airplane engine repair facilities won a major battle in their fight to prevent the employers from moving their jobs to the state of Georgia and Asia. A U.S. District Court judge issued an order preventing aerospace company Pratt & Whitney from closing two plants and moving 1,000 jobs out of the state.

As part of the union’s collective bargaining agreement, the engine manufacturer was required to make “every reasonable effort” to keep the jobs where they were.

Late last week, Judge Janet C. Hall said the company did not live up to their end of the agreement and would not be allowed to move forward with plans to relocate the jobs, which it claimed it needed to do to stay competitive in a challenging aerospace market. In her 85-page conclusion, Hall wrote:

The International Association of Machinists District 26 filed suit against Pratt & Whitney, which is part of United Technologies Corp., last September. The company had turned down more than $100 million in incentives from the state, as the union attempted to halt the company’s proposal to migrate the jobs to Columbus, Ga., Singapore and Japan. Connecticut’s attorney general filed an amicus brief supporting the machinists’ lawsuit. In 2000, the union won a similar battle against the company and forced it to keep some 500 jobs in the state.

Despite the union’s recent victory, the workers aren’t home free. The company could appeal the court’s decision, and the workers’ contract expires in December, when they’ll have to defend their jobs again. Jim Parent of District 26 said:

We’re ready for a fight, if that’s what it takes. But we hope that after the dust settles, the company will recognize what we have said all along – these are the most highly skilled overhaul, repair and refurbishment workers in the world. Pratt may think that moving the work will save costs, but quality and reliability are crucial in aerospace operations. If they want the best performance possible for their demanding customers, Pratt should keep the work here.