At the Margins of the Economy, the Downturn Never Ends 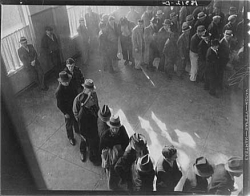 An unemployment line in 1938.   (Photo by Dorothea Lange)

Unemployment fell below 10 percent in January, and it appears the job market may be stabilizing. So does anyone besides Wall Street economists take comfort in those numbers?

It sure doesn't feel like recovery to the communities who are on the bottom even in flush times. You probably didn't hear much about it in the news, but unemployment among black men rose one percentage point to 17.6 percent. Workers aged 25 years and over with less than a high school education were unemployed at three times the rate of those with a bachelor's degree.

The dismal job market has left about a quarter of 16- to 19-year-olds jobless (much higher for youth of color) adrift in a new subculture of "funemployment" among idle youth.

Today, more than 6 million unemployed people have been seeking work for at least 27 weeks. They may soon go the way of more than one million "discouraged workers," who have given up searching altogether. And they're probably right, since there are approximately six job seekers per job opening, according to the latest Job Openings and Labor Turnover Survey.

So who did get hired in January? The Center for Economic and Policy Research notes that the "success story" in the latest jobs report was white women.

But Rosie the Riveter this is not. Actually, the changing prospects for working women reflects the declining fortunes of both sexes. The Christian Science Monitor reported this week, "According to the Labor Department, out of the 541,000 people who said they found work last month, 178,000 were over age 55. Of that group, 140,000 were women – 26 percent of all the hires that month."

It could be that financially crunched women are drawn into the more precarious service jobs, like retail, while traditionally male sectors like construction and manufacturing continue to bleed obs. Yet this trend has left Black women behind; their employment rate fell behind that of their white peers for the first time in a generation, according to CEPR.

If all this dismal news sounds familiar, it's because these trends have been fairly persistent since even before the recession. And that may be the biggest takeaway from the jobs report: chronic unemployment and stagnant wages have crystallized a status quo of sustained disappointment.

The Center for American Progress anticipates a generational slump due to a lack of educational and career pathways:

If current patterns of immigration, retirement, and educational attainment continue, the imminent retirements of “baby boomers” and their replacement by immigrants in the labor force will no doubt tend to lower the educational attainment of U.S. workers. With such a workforce, U.S. employers would have greater difficulty finding and paying for skilled workers domestically who, because of their greater relative scarcity, would now be more expensive to hire. This means higher domestic production costs and perhaps greater rates of offshoring of their business activities.

In black communities, the unemployment crisis stems from the nexus of  structural poverty and racism. "Regardless of the attitudes of individuals, systemic or institutional reasons are probably at least as important as overt discrimination for the vastly higher number of unemployed African American workers,"  writes Arthur Perlo in Political Affairs. The systemic factors include the flight of decent jobs from urban centers and out to the suburbs, or overseas; low rates of unionization, lower education levels in communities of color, and the employment barriers that follow people with criminal records.

And even those successful women have little to celebrate as breadwinners. Valerie Norton with the National Women's Law Center notes that women;s apparent job gains don't make up for macroeconomic losses:

This past month, women’s unemployment climbed to 6.2 percent, the highest rate in 16 years and the largest single-year increase in 33 years.  Unemployment among women who head families – who have no other income to fall back on and are especially vulnerable – climbed to 10.3 percent.... So, while many women are increasingly relied upon as primary earners (often with lower salaries, less health care coverage, and little retirement savings), women are also increasingly facing unemployment and job loss.

The Atlantic Monthly's Don Peck speculates on how a whole generation of young people are resigning themselves to a low-opportunity future fraught with health and emotional challenges.

Strong evidence suggests that people who don’t find solid roots in the job market within a year or two have a particularly hard time righting themselves.....

Examining national longitudinal data, [Krysia Mossakowski, a sociologist at the University of Miami] has found that people who were unemployed for long periods in their teens or early 20s are far more likely to develop a habit of heavy drinking (five or more drinks in one sitting) by the time they approach middle age. They are also more likely to develop depressive symptoms. Prior drinking behavior and psychological history do not explain these problems—they result from unemployment itself. And the problems are not limited to those who never find steady work; they show up quite strongly as well in people who are later working regularly.

So while the slight dip in the unemployment rate suggests that the worst may be over in statistical terms, many communities aren't on the upturn, but sinking into a miserable groove.

The Kirwan Institute's recent race-based analysis of Florida's Recovery Act programs calls on policymakers to leverage stimulus money to steer contracting and training opportunities to the most marginalized groups:

Use First Source Hiring to make sure local communities get jobs, require recipients of stimulus spending to use apprentices or an-the-job trainees and utilize bonding to increase employment opportunities for ex-offenders.

Lawmakers could also support women in the labor force by providing benefits that accomodate the dual roles of working parents, by providing paid family leave, for instance, or strengthening support for child care.

If you look closely enough at the official jobs figures, you'll see the contours of racial and gender inequality, along with its enduring social imprint. "Recovery" isn't in the picture for those communities resigned to chronic struggle. But if the recession offers a moment of clarity, it's not too late to correct the most glaring inequities, before workers forget that another way is possible.