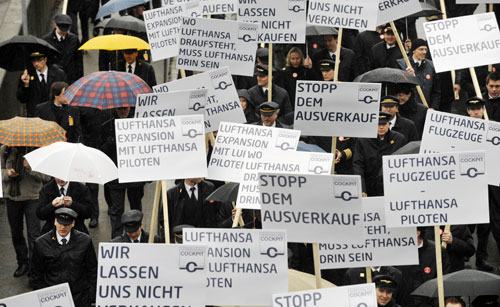 Pilots of German airline Lufthansa hold up placards reading 'We are not for sale' or 'Lufthansa airplanes, Lufthansa pilots,' as they take part in a strike at the airport in the German city of Frankfurt on February 22, 2010.   (Photo by THOMAS LOHNES/AFP/Getty Images)

There’s no doubt it’s been a bad year for workers in the airline industry. We’ve blogged about many of the labor struggles born of the recession’s impact on the sector here, including huge layoffs and concessions at Japan Airlines, U.S. flight attendants fighting stalled wages and the offshoring of jobs at airline repair and production facilities.

In the most recent dispute between workers and an airline, Lufthansa pilots disrupted 900 flights yesterday when they went on strike over fears related to belt-tightening, including the possibility their jobs would be shifted to other carriers owned by the company in other countries.

Though the strike at Europe’s second biggest carrier was supposed to last four days, the 4,000 pilots went back to work when their union agreed to resume talks. The Vereinigung Cockpit union said late yesterday that the strike would be suspended until March 8.

The pilots had offered to forgo pay increases if they were allowed to help determine which routes would be transferred to carriers Lufthansa owns, including those it purchased last year: Brussels Airlines, Austrian Airlines and BMI.

Reuters reported: “Lufthansa has rejected that demand, saying it would require ceding control over parts of business strategy to its workers.” What’s wrong with workers participating in determining the strategy of a company they have a vested interest in seeing succeed in the marketplace? Lufthansa, which is based in Cologne, is hoping to cut 1 billion euros ($1.36 billion) of its costs by next year and compete more effectively with low-cost carriers that have gained popularity in Europe, including RyanAir and EasyJet.

Lufthansa pilots are not the only workers in the European airline industry who are currently protesting conditions. British Airways has asked 75 percent of its workforce to accept paycuts and agree to other reductions and workers say they plan to take action.