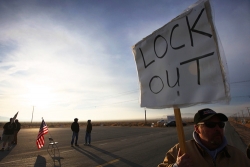 In early February, miners at the Rio Tinto Borax Mine were barred from working after failed union negotiations with the company that owns the mines.   (Photo by David McNew/Getty Images)

Unions are losing the public-relations battle. A survey released Tuesday by the Pew Research Center found that public approval of labor unions has declined significantly during the last three years.

Positive attitudes toward unions have fallen in most demographic groups. Forty-one percent of those surveyed say they have a favorable view of labor unions, while nearly the same amount has an unfavorable view at 42 percent. The results are a 17-percent decline from the last poll taken in January 2007, when a majority of people (58 percent) had a good view of unions while 31 percent thought otherwise. (The findings reinforce a 2009 Gallup poll that said only 48 percent of Americans approve of labor unions—an all-time low since 1936.)

With private sector unionization rates continuing to decline in a scarce job market and unemployment at record highs, unions are somehow managing to lose mass appeal even as Americans face more workplace challenges than ever.

The Pew survey, conducted from February 3-9, found that regardless of race, gender, education level, income and political affiliation, each of these social groups saw a drop in union attitudes. The largest change, 31 percent, came from those over the age of 65.

The new findings are a follow-up to another survey that suggested people have grown skeptical about labor's purpose and rising influence. A similar Pew survey from last April found that Americans were less receptive to the idea that unions can protect working people. They also expressed concern that unions "have too much power."

The results are bad news for a struggling labor movement, but what's the reason for the falling public support?

Recently, unions have faced several legislative hurdles that have ostensibly stifled their capacity to improve American lives. In some cases, anti-union politicians have cast organized labor as a hindrance to economic growth.

Labor's achievements in Washington haven't measured up to expectations. Passing the Employee Free Choice Act was put on the shelf to make way for a sub-par healthcare bill. The confirmation of Craig Becker to a seat on the National Labor Relations Board was thwarted. Even with the president's ear and, until recently, a 60-vote Democratic majority in the Senate, unions have struggled to ease the burden for working people as key pieces of labor's legislative agendas remain stalled.

Similarly, unions have been subject to bad PR. The perception exists that unions have become so powerful that high wages and benefits have stifled recovery. UAW's "jobs bank" was criticized for impeding carmakers' pleas for federal assistance; a strong teachers union makes it difficult to fire incompetent staff. As we've reported, the job losses in heavily unionized sectors in manufacturing and construction hurt membership. Meanwhile, unions in the public sector have grown. But the increase in public union jobs could draw ire from taxpayers who could accuse state workers (and their pensions) for draining resources in the midst of budget shortfalls.

The findings might be grim, but one wonders if the statistics would have been better if the survey were more racially inclusive. Pew says both whites and African Americans saw declines in favorability to different degrees. White men in particular lost faith in unions. Meanwhile, a majority of African Americans still view unions in a positive light, just as they did three years ago but to a lesser extent.

Curiously though, the survey did not include Latinos and Asian Americans. It would have been interesting to see how their responses impacted the survey, considering that both groups are joining labor unions and enjoying greater benefits and wages than non-union members, according to reports by Center for Economic and Policy Research.

In this brutal economy, unions have the difficult task of orchestrating a delicate balance: By appearing intransigent in their demands, they risk coming off as too greedy with employers amid a recession. On the other hand, they also have to preserve the interests of their members by avoiding massive concessions.

Nevertheless, companies are using the recession to push unions and workers to make drastic concessions in wages and benefits. Labor has been fighting to improve working people's lives, but they clearly have a lot of work in getting their message across to the public.