Young People Wait Out the Recession…and Their Youth 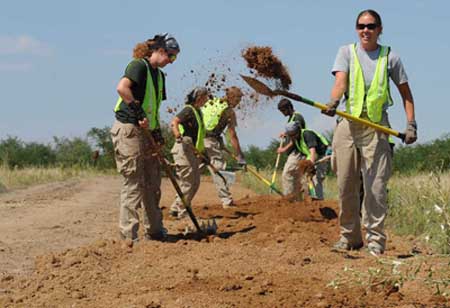 Young workers may not know it, but the jobs crisis threatens to turn what should be the best years of their lives into another “lost generation."

In addition to sky-high unemployment rates, 16 to 24 year olds, according to the Economic Policy Institute, are simply leaving behind the economy that has forsaken them. Since December of 2007, “The labor force participation rate for workers age 16-24 has decreased from 59.1% to 54.7% in the 25 months since the recession started, representing a loss of 1.3 million young workers.”

Another perverse aspect of this trend is that people on the other end of the age spectrum are working more: the labor force participation rate for workers 55 and older rose slightly by 2.3 million workers. These folks aren't working because they're bored; many likely are just too poor to retire, or are scrambling to make up for savings lost in the implosion of Wall Street.

Do young people have anything to look forward to in this upside-down economy?

The inequalities embedded in the country's young workforce are growing more pronounced.

In the Black community, joblessness consistently hovers at epidemic levels. Joblessness among blacks aged 20 to 24 edged up to 28.7 percent in January, compared to (an also frightening) 14.9 percent among whites. Neighborhood segregation and concentrated poverty already prime children for economic stagnation later in life or even downward mobility, according to a Pew study. Involvement in the criminal justice system could either take young people out of the workforce through incarceration (that's one reason why Black unemployment figures are often underestimated), or ensure that they'll have doors slammed in their faces for years to come.

On top of a bleak job market, many immigrant youth are legally blocked from pursuing economic advancement. Students residing illegally in the U.S. are often excluded from higher education thanks to policies precluding subsidized public college tuitions. While they push for passage of the aptly named DREAM Act, their aspirations are left to atrophy as Washington's impasse over immigration reform drags on.

As we've pointed out previously, the long-term effects of joblessness may follow young people for the rest of their lives. Don Peck at the Atlantic noted that young people who start off their working lives in hard times don't get over it very easily. In addition to beginning their careers at a relatively low income level, one study found that college graduates who entered the job market in the midst of the 1981-82 recession started out low and stayed lower than peers who started off in a better economic climate.

Internally, economic turmoil could sow a cycle of anger and defeatism that may manifest itself in depression, heavy drinking, or even family violence.

In a 2008 study, analysts with the Center for Labor Market Education predicted that the low rates of teen employment (which have since intensified) meant that “Low income, Black and Hispanic teens face the equivalent of a Great Depression.” Something as mundane as a shortage of teen summer jobs has implications for future earnings, career choices, and teen pregnancy rates.

The Center for American Progress and Center for Law and Social Policy have devised plans for “reconnecting” at-risk youth through public service jobs programs ala the New Deal.

Absent a comprehensive government commitment on job creation and expanding the role of the state, the AFL-CIO's survey of young workers portrays a generation adrift. About one in three surveyed workers under 35 lived with their parents. About half of young workers of color and women workers said they “worr[ied] somewhat to very often that I will not be able to afford education costs for myself.” So they do with their futures what most people do when they can't afford something they want: take a pass and try to wait out the slump.

• Nearly two in five young workers have had to delay further education or professional development due to financial worries. The statistic is even more extreme for young workers of color—close to half say they’ve put educational goals on hold. And low-income workers are 30 percentage points more likely than young workers with higher incomes to worry about being able to afford the cost of education....

• Young workers are putting off starting a family until they are more financially secure, and close to one in three say they worry very often or somewhat often that they will have to delay starting a family because of economic concerns.

But one lesson we can draw from the experiences of previous recession-era generations is that avoiding risk comes at a high cost in an economy notoriously impatient when it comes to human concerns. About half of the young workers surveyed did not have a retirement plan through their job—a sharp increase from a decade ago, and people of color and those working in blue-collar sectors were even less prepared for post-retirement life.

So it comes full circle: those baby boomers donning Wal-Mart vests have much more in common with angsty cubicle denizens than you think. Workers young and old are struggling to find firm footing on an economic path wending toward indefinite misery. The longer communities and policymakers push back the question of creating a meaningful future for young workers, the more elusive the answers become.