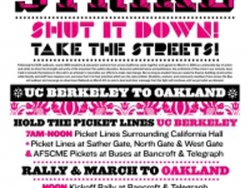 California went from being #1 in the nation in education spending to #47.

A massive movement is rumbling through California today, with support from across the country. Thousands of students, teachers, union members, parents and workers have joined forces to descend on areas throughout the state from north to south, east to west, in a national Day of Action — and outrage.

It comes after months of planning that brought together a coalition of representatives from more than 100 schools, unions and organizations throughout California.

"The California dream is being suffocated by a small group of ultra-conservatives whose only response to public need is:  ‘No. No. No. No,’” said Ken Tray, executive board member and political director of United Educators San Francisco and teacher at Lowell High School in San Francisco.

Actions and participation were planned by employees, workers, students and parents from elementary to graduate school; by the ten campuses of the University of California; 23 campuses of California State Universities; and the 112 community colleges in the state.

Alumni, faculty, students, and staff at these campuses formed an unusual alliance bound by a common vision and joined by K-12 educators also undergoing severe cuts and layoffs along with their students, who are being squeezed into tighter classrooms.

They are sending a message to state lawmakers that public education is not expendable, that equality is not a give-away, and that the greater public good does matter. The coalition is protesting layoffs, class cuts, tuition hikes and the re-segregation of the education system.

One would think the state that holds the title as the world’s eighth largest economy would have a top-notch education system. Instead, California is among the lowest in the nation for education spending.

“Students can’t afford to go to school. Their fees have gone up astronomically in an unprecedented way. California went from being #1 in the nation in education and what we spend on education to #47. It’s a shameful state of affairs,” said Phil Klasky, one of the media coordinators for the California Faculty Association.

State lawmakers, say organizers, are trying to balance the $20.7 billion budget deficit on the backs of educators, students, city workers, health workers, the poor and working class, as Seth Sandronsky for In These Times reported earlier.

In San Francisco for example, over the course of the next two years, schools will be facing $113 million in budget cuts. The impact of course, has already been keenly felt, particularly in working class communities and communities of color.

The Cal State University system has lost $1 billion, more than 2,000 faculty have been laid off, others are dealing with forced furloughs, courses have been slashed and tuition tripled.

"Even though student tuition was raised they are getting less education as a result of our furloughs. This represents about a quarter of instructional days that students are not getting although they are paying more," said Dr. Naomi Quiñonez, a lecturer with the College of Ethnic Studies at San Francisco State University.

The CSU system has had mandatory furloughs implemented whether full time or part time and an across-the-board ten percent pay cut.

In addition, since the fall of 2009 lecturers have had class cutbacks.

“Some received absolutely no classes this semester. We lost a great percentage of our lecturers this last school year. Consequently, classes have gotten larger for the full-time faculty that are there. The department has fewer resources. Everything has been hit,” added Quiñonez.

“The other part is the limitation of admission of students in general and particularly students of color who did not have the opportunity to be admitted to any CSU this year,” she added.

Lamented one student, "If you don’t get all the units you want you start losing your financial aid money. If I cut down to nine units I have to return some of the money because the classes are either filled or cut back. There are fewer classes and they fill up quickly and not all the people are getting in."

According to The California Faculty Association, there are 5,300 fewer course sections offered in Fall 2009 than Fall 2007; $1.4 billion has been cut from the CSU budget in the past 2 years and CSU plans to cut enrollment by 40,000 students. As fees go up, more students are clamoring to get in. CSU received a record number of applications this year.

I ask each of you to join with me in working to turn around an upside-down system where we demand students pay more every semester for classes they can’t get, to fulfill ever-changing requirements for their education. As Speaker, I will fight for all of California’s higher education systems—the UC, the CSU, and our community colleges because we need to restore common sense to higher education and put our students’ needs first.

Organizers are adamant that their message be heard.

“We hope to draw the biggest crowd ever in San Francisco in support of public education and all public services and put the governor, the Republican Party minority and the corporate boardrooms on notice that people are unhappy and we’re taking action and we’re going to fight back,” said Tray.

The march goes far beyond public school interest. Labor unions have thrown their support behind the march as well.

“We reached out to the entire labor movement and even though education was the spark that created this, certainly United Educators and other progressive education locals have made sure that this isn’t just about education. We’re not going to let them divide and conquer us,” said Tray.