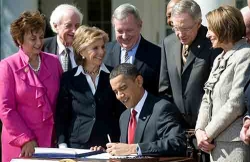 President Barack Obama signs the HIRE Act alongside lawmakers, during a ceremony in the Rose Garden at the White House, on March 18, 2010.   (Photo by SAUL LOEB/AFP/Getty Images)

Congress sent to the White House Wednesday a nearly $18 billion jobs bill that most experts don't believe will create anywhere near the 11 million jobs needed to bring us back to pre-recession unemployment levels.

The bill is similar to an earlier $15 billion bill passed by the Senate, with some minor fixes in the House, that focuses on long-term infrastructure and what some critics see as dubious tax cuts for businesses. The $17.6 billion bill includes a one-year extension of the federal highway program, an extension of the Build America Bonds program that helps states finance certain infrastructure projects and tax incentives for employers to hire workers, as recapped by the AFL-CIO blog.

AFL-CIO President Richard Trumka is one leader who understands that far more is needed, but it's not at all clear that there's either the grassroots activism or political appetite in Congress for massive spending needed to create millions of new jobs. This new package, by most assessments, wouldn't create any more than 250,000 new jobs.

Trumka and other advocates offer ambitous jobs plans that don't seem to have much traction now, despite a new proposed bill to create a million new local jobs. Trumka said:

We must take the additional steps needed to extend unemployment insurance and health care lifelines to the unemployed. We must increase funding for neglected communities to match people who want to work with jobs that need to be done. And we should move right now to use leftover TARP money to get credit flowing to Main Street.

Even though it's won high marks from progressives, the Senate leadership so far hasn't moved to pass the "Local Jobs for America Act," co-sponsored by Rep. George Miller (D-CA). But it offers more than the law passed yesterday does. As the Economic Policy Institute noted:

The Local Jobs for America Act is exactly the kind of bold response we need to address the worst jobs crisis since the Great Depression. Chairman Miller estimates that the legislation will directly save or create 1 million jobs, though the total impact will likely be even higher because of indirect job creation that happens when people have more money to spend at local businesses. The legislation would act quickly, creating jobs in counties across the country with a minimum of red tape.

The legislation would keep more teachers in the classrooms; put more police officers on the beat; and put more emergency responders in firehouses. In addition, over the next two years, the bill would put another 750,000 Americans directly to work in the public and private sectors. These would be full-time jobs that pay wages that allow workers to make ends meet for their families. And these are jobs that will help meet essential needs in local communities, needs that have only grown as a result of the recession.

To promote such ambitious change, the AFL-CIO has launched a new initiative to spur 200 events nationally around the theme of "Good Jobs Now -- Make Wall Street Pay." But if initial turnouts, such as in this video of a Madison, Wis., event put on by the union, are any indication, there hasn't been a huge outpouring yet:

As David Moberg reported in In These Times recently:

Despite popular anger at the big banks, there's only a very weak grassroots movement so far to regulate them or, as labor's two-week protest principally demands, to force the financial sector to contribute to job creation.

"There's enough gut understanding that the banks have not served the average person well and that the banks are big sources of revenue and that the banks got bailed out, but we're dealing with high unemployment," says Madison-based South Central Federation of Labor President Jim Cavanaugh. "But I can't say people are walking in every day talking about the banks. We'll see how many turn out."

The AFL-CIO makes what seems to be a compelling case, but after the smearing by the GOP of the first $786 billion stimulus package, Congress doesn't seem ready to listen to labor's message:

In the short term, economic recovery requires funding jobs at least in part by borrowing for the spending to really stimulate the economy. But in the medium to long term, we need to pay back the money we spend today and have the tax base to address our long-term infrastructure defi cit. It is only fair to ask Wall Street to pay for repairing the economy. That's why we support a four-part package of measures to ensure the government has the funds to pay back what we have to spend to create jobs. These measures have the additional benefi ts of moving the financial sector back to its proper role as the servant, not the master, of the real economy--a creator of jobs rather than a destroyer of jobs.

The House has passed a more expansive $154 billion package than the bill that went to the President; it  includes, critically, massive aid to states and localities that can prevent 900,000 lay-offs. An earlier $140 billion Senate bill would, critics say, have a limited job creation impact. The  measure would extend jobless aid, help states pay spiraling healthcare costs and renew a package of expired tax breaks.

And the five-point plan of the AFL-CIO to create good jobs, financed in part by taxes on Wall Street, doesn't seem to fit in with the small-scale, go-slow approach of the Senate leadership. As earlier reported by the AFL-CIO Now blog:

How does all that square with what this Congress has already done and is considering doing?

It's small wonder that the centrist Economist's View blog bleakly summed up the expert assessment of this over-hyped bill: "Why are they calling this a jobs bill? There are hardly any job creation measures in it."

It's also questionable how many new jobs Congress can create even if it had the political will. There's now another threat looming: China's trade policy seems designed to undercut our own jobs base with cheap imports and currency manipulation.

On most trade issues, it's not clear, as David Moberg has indicated, whether the Obama administration policies will be strong enough to protect American workers. Even the "free trade"-leaning New York Times sounded an alarm Wednesday about the threat the Chinese trade and currency war poses to our recovery:

China's decision to base its economic growth on exporting deliberately undervalued goods is threatening economies around the world. It is fueling huge trade deficits in the United States and Europe. Even worse, it is crowding out exports from other developing countries, threatening their hopes of recovery...

The world's battered economy is certainly in no shape to keep absorbing China's exports, subsidized through a cheap currency policy. The more countries that say this, the more likely Beijing will consider changing course -- and the less likely this disagreement will escalate into a fight that no one can win.

And despite all the rhetoric about "jobs, jobs, jobs" coming from Democrats and Republicans heading into an election year, politics as usual seems to be at work in a gridlocked Washington not willing to risk taking truly aggressive measures to promote jobs. Even the smaller-scale proposals considered by both Houses aren't moving forward smoothly. As the Washington Post reported:

Both chambers -- the House in December, the Senate last week -- have approved jobs packages in the neighborhood of $150 billion. But the two bills reflect starkly different priorities, making it difficult to craft a compromise.

Along with extensions of unemployment insurance and COBRA health benefits, the Senate measure includes a large package of extensions of tax breaks that are popular with the business community. The House bill, by contrast, omits the tax extensions and instead carries significant new spending for infrastructure projects as well as several billion dollars to help prevent state and local governments from laying off teachers, police and firefighters.

Many liberals in the House are contemptuous of the Senate bill's emphasis on tax breaks, and Congressional Black Caucus members have been particularly outspoken in calling for more targeted money for poor areas and the chronically unemployed. But Republicans and moderate Democrats in the Senate appear unlikely to back a compromise bill that includes the House's preferred priorities.

Beyond those conflicts, Democrats are battling the calendar, particularly in the Senate. The majority has found it difficult to get many measures passed in a timely fashion, accusing Republicans of obstructionism. GOP leaders have responded by complaining that Democrats regularly shut them out of the bill-crafting process and bar them from offering amendments.

Even the bill approved Wednesday, which is relatively small and uncontroversial, took more than six weeks to work its way through the system since it was first proposed.

That's a far cry from what Trumka has proposed this week:

We've got an idea for these Wall Street wreckers: Instead of tucking billions of dollars away in the pockets of a handful of individuals, how about putting that money toward creating jobs -- a few billion dollars can go a long way. Just $8.4 billion spent on transit would create 253,539 jobs -- and generate untold positive economic reverberations throughout communities starved for dollars to keep them viable. Just $1 billion would fund the Clean Water State Revolving Fund (H.R. 2847) and result in 27,823 jobs. Another $10 billion would rebuild the infrastructure of our nation's deteriorating schools and create the jobs to do it...

Hard-working Americans will not be ATMs for Wall Street. That's why we in the labor movement are working to hold Wall Street, and Congress, accountable for protecting Americans who play by the rules, preventing future bailouts and job losses and laying the foundation for a financial system that promotes stability and long-term economic growth for our nation and for all.