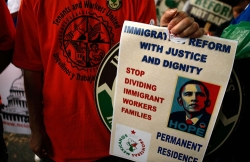 An immigration reform activist holds a sign prior to a May Day march to the White House on May 1, 2009.   (Photo by Alex Wong/Getty Images)

As workers continue to be exploited by "Bracero-style" guest worker programs across the country, immigrant rights groups are gearing up for Sunday's immigrant rights march in Washington D.C.

A lawsuit filed this week by three migrant Mexican women who worked at Captain Charlie’s Seafood, Inc. in North Carolina—and allege they were victims of gender discrimination and wage theft—illustrates why people are marching to change America's immigration system.

Despite claims that women have advanced in the workplace, many are still treated like commodities; this is especially true for immigrant women who are particularly susceptible ­to exploitation.

Captain Charlie’s recruited men and women in Mexico and promised to pay the going-rate for seafood processing. But once workers arrived, the company reneged on its promise of a living wage. Companies will often advertise open jobs at low wages in the U.S. and thus ensure they can hire "guest workers" at even lower wages because they know that U.S. citizens will not apply.

“This company has relied on a significant portion of their labor on temporary visas. I think close to at least 75 percent of their oyster shuckers and crab pickers are on the H2-B program,” said Clermont Fraser, attorney with the North Carolina Justice Center (NCJC). "The wages throughout the H2 visa program are far too low. The employer has so much control over the worker, and workers have to spend several hundred dollars before arriving at work."

Under the Fair Labor Standards Act, the company was required to pay its travel and visa processing fees when workers' expenses are high enough that their net earnings fall below the minimum wage. The three migrant workers paid for the expenses, but were to be reimbursed by the company. That never happened.

Workers often borrow from family and friends or take out loans at very high interest rates to make the trek across the border. Fraser estimates each worker lost about $400.

The broad pattern of discrimination under the H2 guest worker program is the “economic discrimination that happens against all so-called guest workers, which is a pretty Orwellian name for a work program,” NCJC’s Jeff Shaw said. He continued:

For the three women at Captain Charlie’s, the promise of work was severely compromised. Once they arrived at the plant, it was clear that they would not be allowed to do certain jobs and thus, were paid for fewer hours. The company allowed the women to pick crabs and clean the meat from cooked crabs. The men carried crabs, handled crab tarps and cooked.

The company prevented the women from doing the "men's" work, work they were clearly capable of doing. By August 2009, the company fired about 20 women crab pickers but kept the male workers.

“Unfortunately, women seasonal workers are especially vulnerable to exploitation by their employers,” said Fraser. “Migrant workers face many difficulties for a variety of reasons, like language barriers and racism, but women have the additional hurdle of sexism.”

The women had to return to Mexico, but on Wednesday, March 17, they filed a lawsuit charging that Captain Charlie's discriminated against them on the basis of gender, and that the company violated wage standards by underpaying the workers and not reimbursing them for travel and visa expenses.

They are also filing charges with the Equal Employment Opportunity Commission claiming that the gender-based job restrictions violated the Civil Rights Act. The American Civil Liberties Union, the ACLU of North Carolina Legal Foundation and the North Carolina Justice Center filed the lawsuit on behalf of the workers in U.S. District Court.

There’s an increasing demand for cheap migrant labor accompanied by declining wages, benefits and labor and safety standards, according to the report “How the Global Economy Makes Migrant Workers Vulnerable to Exploitation.” When sectors employ migrant workers, the profit margin is much higher for employers.

“Employers prefer migrant workers over local workers because of their vulnerability and lack of choice that results from their foreign status,” the report’s authors state.

Globalization and neo-liberal trade policies harm workers in that they are moving from formal to informal sectors of the economy, from permanent to temporary and contract work, and receive fewer (if any at all) benefits such as healthcare and pensions—an increasingly unheard of luxury.

The safety net that used to catch workers when they were laid off, states the report's authors, has disappeared and migrant workers who find themselves suddenly without promised work or work cut short, end up extremely vulnerable. Migrant workers rights’ organizations are reporting that such migration policies are increasing the vulnerability of workers to abuse under legal migration programs and work permit schemes that tie migrant workers to a particular employer.

These organizations report a rise in the incidence of wage violations, confiscated passports, and a variety of other abuses against those workers who are legally present in a number of countries under various work permit programs.

“It’s an example of an exploitative company trying to seize every advantage they can for people who cannot afford it. Seafood companies have a pattern of doing this in North Carolina in farm work and the seafood industry,” Shaw said.

News of this week's lawsuit against Captain Charlie's follows on the heels of pressure from immigrant and human rights groups to pass humane immigration reform that addresses the root causes of migration.

Tens of thousands of people from scores of organizations around the country are expected to march Sunday in Washington D.C. to urge lawmakers to make changes—or face consequences in a possible voter backlash in November.

In a letter issued this week, the Network states that while Gutierrez's proposal makes some positive improvements to the immigration system, it continues the criminalization of immigrant labor and increases the use of brutal enforcement tactics. It also calls for an end to the criminalization of work through the use of 1-9 audits, E-verify, “silent raids,” and other tactics used to carry out mass firings of workers.

Our principal goal is to generate a national dialogue based on an alternative framework which views immigration as an issue of labor mobility and human rights in an era of economic globalization. If you want to deal with the issues surrounding the mass migration of people anywhere in the world, you must address the root causes, it's that simple.