School Grounds as Battlefield: Political Lessons at an Arabic-themed School 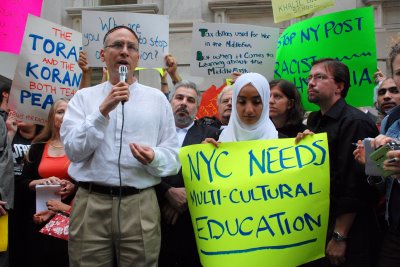 Rabbi Michael Feinberg and Sara Said at a 2007 protest in support of the Khalil Gibran International Academy.   (Photo courtesy Arab Women Active in the Arts and Media (AWAAM))

In 2007, New York City public schools were poised to break new cultural ground. The city established the Khalil Gibran International Academy, a comprehensive public school specializing in the Arabic language. The grade 6-12 school, the first of its kind, was designed as a symbol of cross-cultural understanding in a city still healing from the scars of September 11.

It was also the opportunity of a lifetime for Debbie Almontaser, a Yemeni-American New Yorker, longtime educator and activist, who was chosen to head the new school. But that dream was soon extinguished by those who believe the city has no business engaging Arab culture through the classroom.

Before the school even opened its doors, a right-wing cabal launched a smear campaign against Almontaser and the city's Arab and Muslim communities. In the end, the school survived, but Almontaser was ousted in a storm of anti-Muslim screeds from the conservative media and blogosphere.

But last week, the federal Equal Employment Opportunity Commission vindicated Almontaser, ruling that the New York City Department of Education's treatment of Almontaser was discriminatory “on account of her race, religion and national origin.” Linking labor ethics and civil rights, the panel declared:

[The Department of Education] succumbed to the very bias that the creation of the school was intended to dispel, and a small segment of the public succeeded in imposing its prejudices on DOE as an employer.

The ruling, while not binding, underscores the racial and ethnic tensions percolating throughout New York City, as well as the threatened rights of educators in marginalized communities.

In the months leading up to the school's opening, a local coalition that called itself "Stop the Madrassa" went full-throttle to paint Almontaser as a Muslim extremist, suggesting the school would serve as a a junior terror training camp in the middle of Brooklyn. (They seemed to gloss over the background of the school's namesake, a Lebanese-American Christian writer known for his culturally transcendent works.)

The final blow came when Almontaser was cornered by a reporter for the Murdoch-owned New York Post. He questioned her about a T-shirt displaying the word "Intifada"—which was supposedly tied to Almontaser because the activist group that designed it, Arab Women Active in the Arts and Media (AWAAM), shared office space with an organization affiliated with her.

Almontaser then did the unthinkable. She acted like an educator and gave an honest answer, providing a nuanced definition of "intifada" and its connotations of Palestinian struggle, while insisting that she herself had nothing to do with the T-shirts.

Nevertheless, the rabid opposition (tied to a nationwide network of right-wing idealogues) pounced on the statement. Within days, Almontaser was ousted and replaced with a less controversial administrator. The Commission's report and Almontaser both concluded that Mayor Michael Bloomberg's administration forced her resignation.

The ouster exposes the kind of subtle disenfranchisement that teachers may experience in the city's mayor-controlled school bureaucracy.

Though Almontaser's ordeal centered on employment equity, her defenders did not include the teacher's union (then-chief of the local United Federation of Teachers, Randi Weingarten, in fact openly condemned Almontaser's supposed validation of the word "intifada"). But various local officials and community groups have stepped up, including the Center for Immigrant Families and Greater New York Labor-Religion Coalition. Undaunted by the hateful spew, AWAAM led the effort, campaining online and in the streets, petitioning the Mayor's office, and supporting a lawsuit demanding that the city put Almontaser back in the principal's office.

The fervor faded after the Mayor's Office made it clear it wouldn't rescind its original decision. But the EEOC's ruling could reinvigorate the communities that came together in support of Almontaser. Almontaser recently told Amy Goodman on Democracy Now! that she still hopes for reconciliation:

It’s my life’s dream, Amy, to have the opportunity to lead a school that I created, with the help of others, to establish an institution that would set precedents in helping building bridges of understanding and certainly creating young people who will be global thinkers and, you know, competing in the twenty-first century workforce. And so, I’m still committed to that dream.

The future of Almontaser and the school are uncertain. Khalil Gibran has struggled with personnel disputes, and its leadership remains in limbo with the recent departure of its principal.

The Khalil Gibran controversy resurfaces in the midst of mounting tensions over cultural diversity in education: the system is fraught with questions over civil rights in Obama's school reform initiative, flaring racial hostility at the University of California, a right-wing takeover of Texas textbooks, and the controversy over education access for immigrant youth.

All these issues reflect a country that is constantly confronting, blurring and redefining cultural borders. The trajectory of Almontaser's career highlights the role that educators play in the movement for multicultural, multilingual schools, yet it exposes their vulnerability as workers in an increasingly politicized public sector. Teachers have a mandate to act as civil servants, but they often lack the freedom to act as agents of change in their communities.

Back in 2007, Sara Said, a Yemeni-American college student whose younger brother was enrolled at Khalil Gibran, spoke out alongside other local activists at a rally in support of the school:

One of the most important things education should do is just really teach a student how to question things... The students need to question society and not accept society as it is, because if we continue accepting it, this is what is going to happen, like letting a newspaper or a few individuals run our country.

Whatever happens to the students and staff of the Khalil Gibran Academy, Almontaser's struggle has already given New York a tough lesson on the meaning of a worldly education.

For more on the Khalil Gibran International Academy campaign, go to Communities in Support of KGIA.