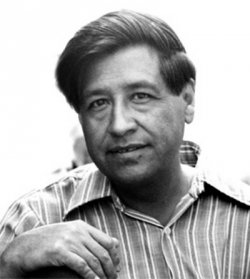 “The truest act of courage...is to sacrifice ourselves for others in a totally nonviolent struggle for justice." —Cesar Chavez

The day the body of Cesar Chavez, civil rights leader and founder of the United Farm Workers (UFW), was brought to Delano in California, I cut out of work with a co-worker and drove from San Francisco to his memorial. After driving through the winding dusty road leading to Chavez’ UFW field office at “Forty Acres,” we saw before us a vast wave of people flowing onto the grounds. It seemed that his death galvanized the movement. 50,000 mourners had made a pilgrimage to honor this man who lay in a simple pine box.

Chavez died April 23, 1993, at age 66. This Wednesday, March 31—Chavez's birthday—is the California state holiday honoring the labor leader. (There's an ongoing effort to make his birthday a national holiday.) Many commemorations and events are planned to mark the occasion, including the Cesar Chavez holiday breakfast in San Francisco (March 31) and a parade and festival (April 10).

Chavez's funeral was said to be the largest for any labor leader in U.S. history. Hundreds of murals and memorials have been built in his honor. Two years ago, renowned Los Angeles artist Judy Baca and SPARC’s Cesar Chavez Digital Lab unveiled the exquisite Cesar E. Chavez monument at San Jose State University.

The day Chavez died, work across the fields and rural areas of the nation came to a stop. Workers in urban areas in the factories and offices from around the nation took off to make the memorial, many driving days to get there. Students from all over came in droves. People came in caravans, buses, vans. Many had marched side-by-side with Chavez in the struggle for farm worker justice.

Thousands of eagle-emblazoned red and black farm worker flags and banners and placards “Viva la Causa,” (Long Live Our Cause) and “Huelga” (Strike) waved across the grounds. People sang “De Colores,” the song many affiliate with Chavez and “La Causa.” Explaining the eagle, Chavez had once said, "A symbol is an important thing. That is why we chose an Aztec eagle. It gives pride . . . When people see it they know it means dignity."

There was no grand call for people to come to his memorial in the middle of the San Joaquin Valley. Few flyers were passed out, and the Internet was barely part of life. Texting and twittering were not a part of the landscape then.

Here's what was present: the spirit of Chavez and the love he inspired in the people. His courage. His unwavering spirit. His quiet resolve and strength. His refusal to give up in the face of great danger. His ability to inspire a nation of workers who had long endured abuse.

I remember being with my parents in East Los Angeles and seeing people holding and waving “Boycott Safeway” signs. I saw the red and black flags and the fierce conviction of supporters. I remember the “Boycott Gallo!” signs making such a deep imprint on my young mind that even now I veer away from Gallo products (not that they are any good anyway!). His efforts led to Chicano activism in the '60s and '70s. Chavez and his fight for justice helped shape my own political convictions to this day.

His deepest commitment was to improve the conditions of the campesino (farm workers) who harvest our food in the fields and, even now, are often barely able to afford food themselves. From the ferocious Delano grape strikes depicted in photos and TV images of big, pot-bellied growers carrying guns, to the 340-mile march from Delano to Sacramento in 1966, to his fasts (which most likely weakened his system and led to his early death), he protested the status quo. La Causa became known around the world.

Chavez founded the UFW (formerly the National Farm Workers Association) in 1962 along with Dolores Huerta. In 1964, his organization joined together with an AFL-CIO-sponsored union to strike against Delano area table and wine grape growers. The five-year boycott rallied millions of supporters.

And so it went, on and on, throughout the years. He fasted, organized and united supporters and broke the backs of seemingly unstoppable forces.

In 1973,10,000 farm workers walked off the grape fields to strike over a contract dispute. Strikers were arrested, beaten, and even killed. Chavez called off the strike and instead, called for a boycott of table grapes. 17 million Americans refused to buy grapes.

He did what no one thought could happen. Powerful grape growers accepted union contracts for the first time.

The result was the 1975 Agricultural Labor Relations Act, supported by California Governor Jerry Brown. It protected the right of farm workers to unionize and boycott, and guaranteed secret ballots in farm workers' union elections.

What would Chavez do now, in 2010, where farm workers continue to battle for fair wages, protection from pesticides, and work in dire conditions here (Giumarra Vineyards (the nation's largest table grape grower)  and in places like Florida?And where agribusiness is pushing for a new exploitive bracero program?

What would Chavez do today?

What would Chavez do now, when immigrants are chased and detained by federal agents and held in detention centers across the country? What would he say of the trade agreements that force workers to travel north to feed their families, migrations so eloquently described by labor journalist and photographer David Bacon?

Here’s to the hope that Chavez will not be forgotten. That children across the country will be taught who this man was. Even if some forces want to wipe him out of history—like the Texas Board of Education, which decided to remove Chavez from history books.

His rallying cry “Si se puede!” is heard today as people around the nation fight for immigration reform and workers' rights. I imagine that were he alive today, he would be right beside protesters, marching, fasting, boycotting and demanding that people be treated fairly, equally, and justly because, well, united, Si! Se Puede!