As Congress Leaves Jobless in Lurch, Will Grassroots Push for Strong Jobs Bills? 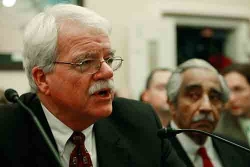 Even as Senators skipped town before a two-week break without extending unemployment insurance and COBRA health subsidies, hopes are rising among congressional liberals and unions that stronger job creation measures could win the backing of emboldened Democratic leaders and President Obama. (Some state-based officials also expect state agencies to tide over workers at risk of losing their benefits before the Senate takes action in mid-April, while advocates for the unemployed are far more alarmed.)

But will progressives be willing to mount the strong campaign needed to overcome conservative and centrist resistance to major jobs spending?That's the political challenge, especially after the first stimulus bill last year was effectively smeared as a waste of money although it saved or created nearly two million jobs. As George Packer notes in his devastating New Yorker article, "Obama's Lost Year," 94 percent of Americans don't think it created jobs in their areas.

Yet despite relatively weak efforts so far by Congress to create anywhere near the 11 million jobs needed to return to pre-recession employment levels, a targeted $75 billion bill co-sponsored by Rep. George Miller (D-CA) to save or create nearly a million local jobs is gaining traction on the Hill. "As long as the jobs picture looks like this [nearly 10% officially unemployed], pressure continues to build," the AFL-CIO's legislative director, Bill Samuel, told In These Times.

George Miller's bill—developed with mayors, county officials and others—will provide $75 billion over two years to local communities to hold off planned cuts or to hire back workers for local services who have been laid-off because of tight budgets. Funding would go directly to eligible local communities and nonprofit community organizations to decide how best to use the funds, as outlined by Rep. Miller. Yet even that legislation isn't anywhere near the scope of the $400 billion or so labor unions and its allies have proposed spending to create millions of jobs.

What makes this important bill different than most of the contentious other reform legislation introduced in this Congress is that it's winning bipartisan local support that could help build a groundswell for the bill.

As Miller's press spokesman, Aaron Albright, told In These Times, "We're building support, but you can already count the Congressional Black Caucus, the Progressive Caucus, the League of Cities, the U.S. Conference of Mayors and more [including the National Association of Counties]." He points out that at the press conference for the bill, the legislation won the support of the liberal firebrand vice-chair of the Progressive Caucus, Rep. Keith Ellison (D-Minn.), and a suburban Republican mayor, Elizabeth Kautz, who is chairman of the U.S. Conference of Mayors. "How often does that happen?" Albright asks.

Indeed, Rep. Ellison is making a special plea to progressives to get behind this legislation, which he helped craft. As reported by the Campaign for America's Future:

Progressive Caucus member Rep. Keith Ellison, D-Minn., has an Easter recess assignment for activists: Get 216 cosponsors for the Local Jobs for America bill, perhaps the most important action Congress can take this year to help lower the unemployment rate and jump-start the economy.

The legislation, HR 4812, already has 92 cosponsors in the House, and Ellison, working with the bill's sponsor, Rep. George Miller, D-Calif., is working to build momentum for the legislation in the coming weeks. The bill would authorize $75 billion, which would be distributed through state and local governments to create or save from 750,000 to 1 million jobs over two years.

Ellison said if supporters succeed in getting 216 cosponsors, "that makes it pretty much a slam-dunk to pass the bill," he said.

This week, Ellison and Miller met with members of the National League of Cities, the National Association of Counties and members of the Jobs for America Now coalition. In addition to cosponsor support, the coalition is working on getting endorsements for the legislation from mayors and other elected officials from both parties. That bipartisan grassroots support may prove particularly important in the Senate, where conservatives have been working to block previous jobs measures on the grounds that they are not "paid for."

Here's his video appeal, as shown in an interview with CAF's Isaiah Poole.

Buoyed by their healthcare win, Democrats and the president, who showed a new willingness to buck Republicans by making 15 recess appointments, including a pro-union attorney to the National Labor Relations Board, are signalling a confident new willingness to push ahead on their agenda without Republican support.

But it's not at all clear these measure can get through a Senate reluctant to support any further "deficit spending" to create jobs.

Even so, "it will be paid for," notes Ellison, if not immediately, because of the increased revenue government-spurred employment generates in a recession. Moreover, he and other reformers point out, it's less expensive to spur job creation for the unemployed and gain tax revenues than to pay for unemployment insurance and ER care when they lose health insurance. He also cites the long-term benefits of ensuring that communities are protected because firemen and the police still have jobs, and children are educated because their teachers aren't laid off.

At the press conference in early March, Rep. Miller and his allies made a strong case for targeted, quick job creation measures -- rather than the tax giveaways that have marked much of the relatively smaller-scale jobs legislation that have either passed Congress or passed either House. The Senate bills have especially favored tax breaks for businesses over direct job creation measures.

Yet even one little-noted $17 billion "jobs" bill that passed the House last Wednesday offered still more tax breaks to small businesses and promoted long-term infrastructure programs through added funding for bonds that can be issued by local governments. As The New York Times reported.

This relatively modest legislation fits in with a strategy shaped by Majority Leader Harry Reid and accepted by Majority Leader Nancy Pelosi to push through a series of smaller bills that promote jobs creation, rather than one massive bill that could become an easy target for Republicans. But it's questionable, progressive economists and experts say, whether such strategies can deliver the needed jobs this recovery requires.

Compare that indirect, smaller-scale measure to the vision of what Rep. Miller and his allies are proposing, and the challenge facing progressives in this Congress becomes even more stark.

"Job cuts by local communities threaten to derail America's economic recovery," Miller, chairman of the House Education and Labor Committee, proclaimed on March 10, when introducing the bill. "Local communities are having to choose between raising taxes to sustain essential services or firing more workers."

Here's an in-depth look, as described by Rep. Miller's office, at what this relatively ambitious legislation would do:

$52.5 billion directly to communities with at least 50,000 residents - Mayors, County Officials and Governors would submit a statement to the need for the specific positions to the Department of Labor. The department would then distribute funding to communities based on the Community Development Block Grant formula.

$22.5 billion directly to governors to distribute to communities with fewer than 50,000 residents - Job creation funding will sent to towns, counties, or private non-profits outside of those communities eligible for the funding above. Local governments will apply to the governor for the funding.

Like support to larger communities, half of the funding may be spent on retention of positions slated for elimination, up to 25 percent of the funding can go to non-profit community organizations that provide services not customarily provided by local government employees. The remaining 25 percent may be used for creation of new jobs in local government. The governor must fairly distribute the funding among congressional districts, in proportion to each district's rural population.

Funds may only be used for compensation of full-time, full-year positions. "Full-year" defined to include school year positions. Local governments may expand existing services or restore services cut in the past five years. Positions are federally funded for two years.

It's small wonder that this approach has also been embraced by a common-sense Republican mayor, Elizabeth Kaust. "Mayors are pleased to partner with Chairman Miller to push this important legislation," she said at the March press conference.

The still-unanswered question is whether Republicans in Congress will listen to such appeals in the hyper-partisan political climate in Washington before the November election -- and whether liberals will be strong enough to win support for the measure and be able to put incumbent Republicans on the defensive over jobs, when the administration in power will be the likely target of public wrath.

As the Associated Press observed:

Losers in a brutal struggle with President Barack Obama, Republicans now hope voter anger over newly enacted health care legislation will propel them to victory in midterm elections this fall.

No matter the impact of health care, the economy still matters most -- unemployment in particular -- in a country struggling to emerge from the deepest recession in decades.

In poll after poll, it isn't even close.

A CBS/New York Times poll taken last month, when the health care debate was in a lull, showed 52 percent of those surveyed identified the economy as their top priority. Health care was a distant second at 13 percent...

"There is still one number that matters most on Election Day, and that is the unemployment number," said David Winston, a Republican pollster. "If unemployment is where it is now (9.7 percent nationally), people are going to be very unhappy and looking for a change.

But it isn't finger-pointing over who is to blame over unemployment that will decide the election—but real results. Can Congress and the White House be prodded into taking the strong measures that are really needed to create jobs and bring down unemployment? What unions and liberals do over the next few weeks could decide the answer.