A Black Agenda That Works for Everyone: Jobs and ‘Targeted Universalism’ 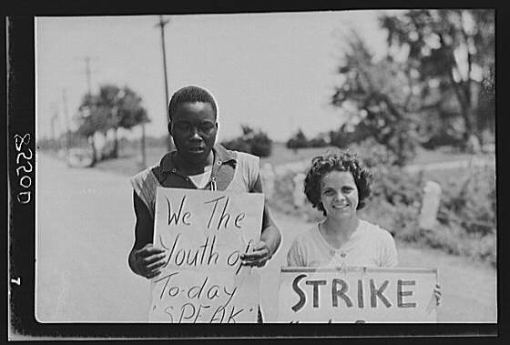 An integrated picket line at King Farm strike in Morrisville, Penn., in August 1938.   (Photo by John Vachon via University of Illinois Urbana-Champaign.)

Every year, the National Urban League issues its report on the State of Black America, and it almost inevitably shows that black Americans fare worse than whites in almost every measure of socioeconomic well-being. Black workers and households are poorer, less secure, and more vulnerable to the volatility of market forces than their white counterparts.

The concept of black and white inequality is so ingrained, so seemingly intractable, none of this today will shock astute observers in Washington (the Beltway itself, in its demographic and economic profile, reflects the very disparities that the Urban League highlights).

Still, plenty has changed since the first SOBA was published in 1976; back then, who could fathom that Black America would produce a president within a generation? But much has stayed about the same. Urban League CEO and President Marc H. Morial told the Root.com, "There is a sense of déjà vu, particularly back in 1975 when the economy dipped and declined." Back then, as Change.org's Tara Kyle points out, the oil crisis, haywire prices and massive unemployment set black communities on the path to a "sustained crisis"—a permanent dip that has only deepened in the current recession.

According to the Urban League report, from 1972 to 2009, black unemployment was roughly double that of whites. (The gap has narrowed slightly since then as overall joblessness worsened.) The inequities afflict all aspects of community welfare. Blacks have lower rates of home ownership. Both blacks and Latinos "are more than three times as likely as whites to live below poverty," and both groups are far less likely than their white peers to have health insurance or a college degree.

So what's different about this year? A cautious sense of both urgency and renewed possibility in the White House and Capitol Hill, perhaps. And the Urban League has a fresh plan to address the economic crisis not just through the lens of racial inequality, but by seeing black people's struggles as a harbinger of what's devastating all of America.

The plan provides for $168 billion over two years, focused on “investing in direct job creation, job training for the chronically unemployed, greater access to credit for small businesses and additional counseling relief for those caught in the backlog of the foreclosure process.” The specific programs seem more regional than racially oriented:

The idea of an inclusive economic agenda that works for all, black and otherwise, may strike some as too soft. That was the subject of the media brouhaha over whether black political leaders were giving Obama "a pass" by de-emphasizing the racial dimension of inequality. But the Urban League and other mainstream advocacy organizations don't see it as a cop-out, but rather an attempt to graft one community's agenda onto the broader obligations of government.

We're seeing seeds of that already in Congress with the advancement of the Disaster Relief and Summer Jobs Act in the House and the more ambitious Local Jobs for America Act, co-sponsored by Congressional Black Caucus Chair Barbara Lee.

According to an analysis by the Economic Policy Institute, the Local Jobs bill would provide $100 billion over three years through targeted funding streams that will especially impact blacks, simply because the worst statistics tend to fall on one side of the color line.

The Act’s grant formula takes into account three things: population, poverty, and unemployment. Both of the latter factors, which control three-quarters of the funds, will significantly help communities with large concentrations of African Americans, whose unemployment and poverty are excessively, disproportionately high.

Moreover, blacks stand to benefit from funding that bolsters local government workforces, which have historically had a heavy concentration of workers of color.

EPI's Algernon Austin, in his recent testimony before the Congressional Black Caucus, used educational and socioeconomic data to caution against accommodating the “rising tide lifts all boats” rhetoric (i.e. the yacht-dingy dichotomy presented by Tavis Smiley). To show that “the American economy does not work as well as it should for people of color and particularly for African Americans,” he pointed out that in one study on Chicago, “data from before the recession shows that at every education level blacks were more likely to be unemployed.... education alone cannot address the black-white unemployment disparity. More-educated blacks have unemployment rates comparable to less-educated whites.”

The EPI and Urban League say structural inequalities can be confronted without fixating on what conservatives might dismiss as mere “identity politics.”

In addition to its first-ever inclusion of Latinos in the inequality index, the Urban League has launched the"I AM EMPOWERED" initiative, which sets "a goal for the nation to achieve access for every American to a quality job with a living wage and good benefits by 2025." For activists who have been in the trenches and seen the corrosive effects of segregation and discrimination communities of color, the word "all" could raise anxieties about papering over racism.

But progressive groups like the Kirwan Institute define their mission as instituting “targeted universalism.” Morial argued on NPR that inclusion and targeting aren't necessarily at odds and could converge to yield real results:

I think that what a president should have is an agenda for the nation that includes the specific needs of America's most vulnerable citizens that targets the needs. And the idea of targeting is nothing new. You had targeted economic policies under the Nixon, Ford and Carter administrations. You had targeted policies with the empowerment zones under the Clinton administration, indeed, if you go all the way back to Franklin Roosevelt. He had targeted policies for urban communities where the unemployment rates are high.

The Atlantic's Ta-Nehisi Coates sees racial consciousness as a complement to, not a substitute for, a more comprehensive equity framework:

Any assessment of black America must take into account ongoing employment discrimination, racist practices in the lending industry, and how race influences who we jail and for how long.

But beyond that, it must also take into account the legacy of nearly a century of Jim Crow, red-lining, and active wealth-destruction aimed at black people. That legacy shows up mostly in an absence of resources in the black community. But African-Americans aren't alone in suffering the effects of resource poverty, and it makes neither moral nor practical sense for a president to simply address the issue in the black community. A progressive strategy of targeting a resource deficit among all people has the advantage of disproportionately helping blacks, while at the same time helping a much larger numbers of non-blacks.

Racial injustice is revealed most acutely in the daily rhythms of work. Even if not the product of programmatic discrimination, the exclusion and degradation of black workers—which includes both outright discrimination and the barriers stemming from concentrated poverty—undermines the legacy of civil rights struggles past and forecloses opportunity for future generations. Moving toward fairness in the labor market, and the labor movement, could have ripple effects in education, housing and health as well.

That kind of rising tide may finally be reaching Washington, as a more conscious dialogue on the economy places the "Black agenda" in a more open arena. The latest wave of crisis could push lawmakers to realize that a drastically uneven keel could ultimately sink all of us.