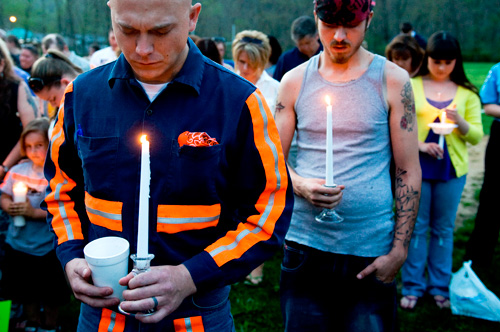 Thomas Jones (L), a coal miner, participates in a candelight vigil in Whitesville, West Va., on April 7 for the 25 miners that were killed in an explosion two days earlier at the Upper Big Branch coal mine owned by Massey Energy Company.   (Photo by SAUL LOEB/AFP/Getty Images)

Buried deep in most stories about the West Virginia coal mine disaster at Massey Energy Company's Upper Big Branch mine, if mentioned at all, is one clue to why at least 25 lives were lost: The mine was non-union.

Miners die in unionized as well as non-union mines, of course. And Massey's record of safety violations, penalties, and smaller-scale accidents suggests its management philosophy and practices contributed to the lethal incident, despite the company's claim that its safety performance has improved. Ultimately, official investigations will pinpoint precisely what went wrong.

But an examination of the incidence of coal mine fatalities since 1995 shows that in every year but one fatal accidents occurred in non-union mines at a rate disproportionate–usually much more disproportionate–to the non-union share of the workforce. In other words, unionized mines were much safer.

It would be ideal to compare fatalities per thousand hours worked in union and non-union mines, but those data appear to be unavailable. The United Mine Workers of America (UMWA) has tallied fatalities–noting whether they occurred in underground, surface, open pit, preparation plant or other facilities and whether the workers were UMWA members, non-UMWA workers, non-UMWA contractors, or "company personnel."

And Unionstats.com–maintained by Barry Hirsch of Georgia State University and David Macpherson of Trinity University–uses Census data to determine annually the share of each industry that is unionized.

Looking at these data, only in 2001 were there disproportionately more fatalities (39 percent) in union mines (unions represented 30 percent of coal miners that year) than in non-union mines. Recent figures are more typical. In 2006 through 2009 union mines accounted for 10, 6, 10 and 5 percent, respectively, of all coal mine deaths, but over that period unions represented 15 to 22 percent of coal miners. For those years unionized miners appear to have been one-fourth to one-half as likely to be killed in mine incidents as their non-union peers.

In some other years, union mines are only slightly more safe than non-union, but overall the trend is for union mines to be about twice as safe, as indicated by fatalities. (Fatalities, which can't be easily covered over, are a reliable safety indicator, much more than injuries, since non-union mines often cover up or fail to report injuries.)

The bad news is that union representation is down dramatically. In 1996, for example, 42 percent of miners were in unions. In 2009 only 20 percent belonged to a union.

Tougher enforcement of laws, with higher penalties, and stronger safety standards are essential. But unionized miners have the power to enforce those standards before there's an accident, and they can prevent the speed-ups, overwork, and shortcuts that are common in non-union mines, like Upper Big Branch, and that contribute to the dangers of the job.

If Congress and Obama want to do something to save miners' lives, they should first of all protect and strengthen their right to organize.